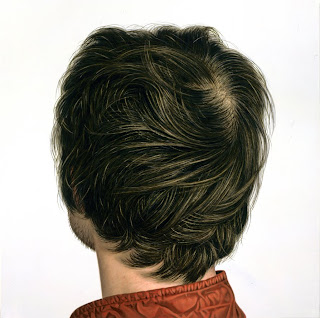 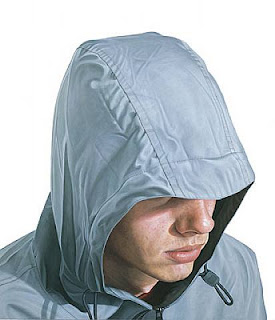 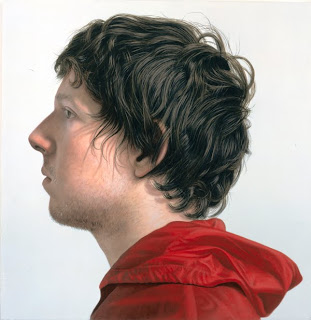 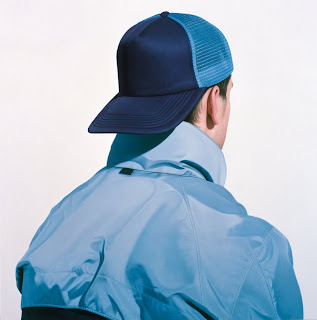 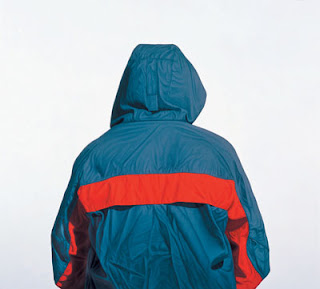 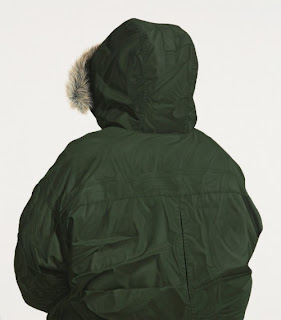 Anyone who has ever ridden the New York subway at rush hour knows the feeling of being pressed so close to your fellow commuters that you can see their every pore, shaving nick and flaking follicle. To artist Karel Funk, newly arrived in Manhattan from his native Winnipeg, Manitoba, in 2001, that proximity to strangers on a train proved overwhelming at first—then career changing. He’d been toying with suburban angst in his paintings but felt that route was already well traveled by others. In urban voyeurism, however, he knew he had found his ideal subject.

“I was fascinated by how this boundary of personal space completely disappeared on the subway,” Funk recalls by phone from his home in Winnipeg, where he returned in 2003 and works in a studio in the basement of his house. “You could see details of somebody’s ear or neck that you’d never observe just socializing with friends because there’s this boundary we all keep.”

It’s those close encounters with strangers that inspire Funk’s hyper-realist, neo-Renaissance portraits of young urbanites, the latest of which go on view in April at New York’s 303 Gallery. “I wanted to convey that moment when you’re forced to look intimately at the back of a stranger’s head, but I didn’t want there to be any emotional connection,” says Funk, who depicts minute details like an acne scar or a fabric fold with exquisite, microscopic clarity, applying sometimes up to a hundred layers of acrylic to a wood panel. To Carter Foster, curator of drawings at the Whitney Museum of American Art, which owns a Funk, the 38-year-old artist “comes close to [Edward] Hopper in the way his works implicate the viewer as a kind of voyeur.”

Yet even as he allows us to scrutinize his subjects, Funk reveals little of their lives. His paintings are firmly rooted in the history of portraiture, he says, acknowledging his debt to Renaissance masters such as Holbein and Bronzino, with their focus on precise detail and brushwork. And like those artists, he pays great attention to what his subjects wear, seeing the jackets and hoodies he provides them as modern-day armor and shields.

But unlike traditional portraiture, in which the subject typically locks eyes with the viewer and background details provide clues about them, Funk’s subjects face away from us or have their eyes closed, as if they’re unaware of our presence.

“As soon as you see a face—there might be some tension in the eyes or mouth—there’s a story, a feeling,” he says. By obscuring the face or cloaking it altogether as Funk does, “it becomes very hard to find a specific narrative or emotion about that person,” he notes. “My paintings give you very little. There’s nothing there to connect with except for the formal qualities, the texture of skin, hair or clothing, and the questions you’re left with about ‘Who is that person?’” 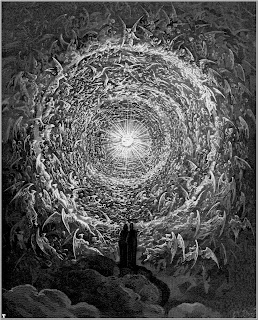 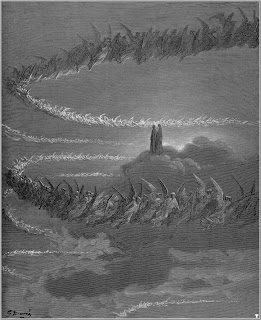 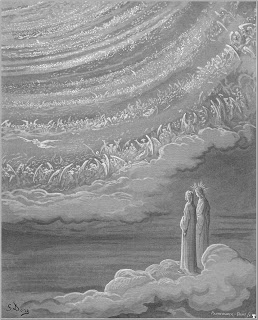 Gustave Dore was born in Strasbourg in 1832. He became a book illustrator in Paris and his commissions included work by Rabelais, Balzac and Dante. In 1853 he was asked to illustrate the works of Lord Byron. This was followed by other work for British publishers including a new illustrated English Bible.

Dore's English Bible (1865) was a great success and in 1867 Gustave Dore had a major exhibition of his work in London. This led to the foundation of the Dore Gallery in New Bond Street.

In 1869, Blanchard Jerrold, the son of Douglas Jerrold, suggested that they worked together to produce a comprehensive portrait of London. Jerrold had got the idea from The Microcosm of London, that had been produced by Rudolf Ackermann, William Pyne and Thomas Rowlandson in 1808.

Dore signed a five-year project with he publishers, Grant & Co, that involved him staying in London for three months a year. Dore was paid the vast sum of £10,000 a year for the proposed art work. The book, London: A Pilgrimage, with 180 engravings by Dore, was eventually published in 1872.

Although a commercial success, many of the critics disliked the book. Several were upset that Dore had appeared to concentrate on the poverty that existed in London. Gustave Dore was accused by the Art Journal of "inventing rather than copying". The Westminster Review claimed that " Dore gives us sketches in which the commonest, the vulgarest external features are set down".

London: A Pilgrimage was a financial success and Dore received commissions from other British publishers. Dore's later work included Paradise Lost, The Idylls of the King and The Works of Thomas Hood. His work also appeared in the Illustrated London News. Dore continued to illustrate books until his death in 1883. 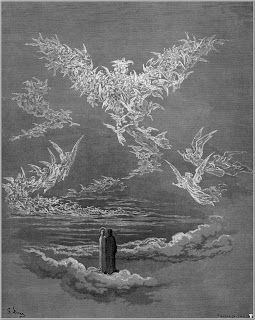 Doré was born in Strasbourg and his first illustrated story was published at the age of fifteen. At age five he was a prodigy artist already creating drawings. When he turned 12 he began to carve his art in stone. Doré began work as a literary illustrator in Paris. Doré commissions include works by Rabelais, Balzac, Milton and Dante. In 1853 Doré was asked to illustrate the works of Lord Byron. This commission was followed by additional work for British publishers, including a new illustrated English Bible. In 1863, Doré illustrated a French edition of Cervantes's Don Quixote, and his illustrations of the knight and his squire Sancho Panza have become so famous that they have influenced subsequent readers, artists, and stage and film directors' ideas of the physical "look" of the two characters. Doré also illustrated an oversized edition of Edgar Allan Poe's "The Raven", an endeavor that earned him 30,000 francs from publisher Harper & Brothers in 1883.[1]

Doré's English Bible (1866) was a great success, and in 1867 Doré had a major exhibition of his work in London. This exhibition led to the foundation of the Doré Gallery in New Bond Street. In 1869, Blanchard Jerrold, the son of Douglas William Jerrold, suggested that they work together to produce a comprehensive portrait of London. Jerrold had gotten the idea from The Microcosm of London produced by Rudolph Ackermann, William Pyne, and Thomas Rowlandson in 1808. Doré signed a five-year project with the publishers Grant & Co that involved his staying in London for three months a year. He was paid the vast sum of £10,000 a year for his work. He was mainly known for his paintings, contrary to popular belief about his wood carvings. His paintings are world renowned, but his woodcuts are where he really excelled.

The book, London: A Pilgrimage, with 180 engravings, was published in 1872. It enjoyed commercial success, but the work was disliked by many contemporary critics. Some critics were concerned with the fact that Doré appeared to focus on poverty that existed in London. Doré was accused by the Art Journal of "inventing rather than copying." The Westminster Review claimed that "Doré gives us sketches in which the commonest, the vulgarest external features are set down." The book was also a financial success, and Doré received commissions from other British publishers. Doré's later works included Coleridge's Rime of the Ancient Mariner, Milton's Paradise Lost, Tennyson's The Idylls of the King, The Works of Thomas Hood, and The Divine Comedy. His work also appeared in the Illustrated London News. Doré continued to illustrate books until his death in Paris in 1883. He is buried in the city's Père Lachaise Cemetery. 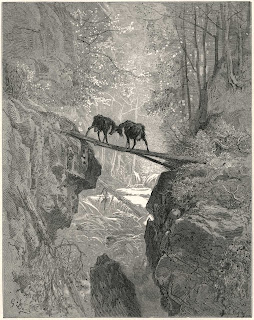 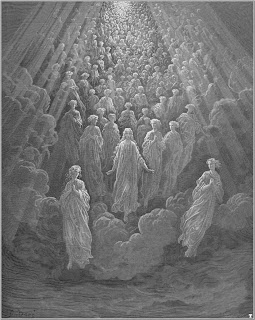 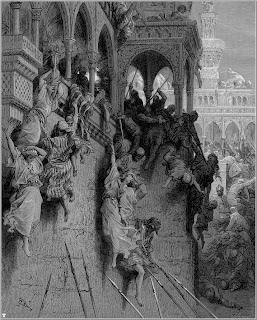 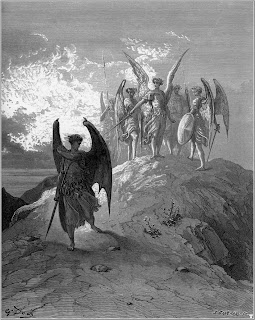 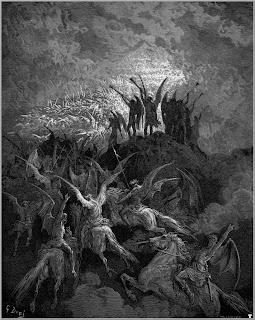 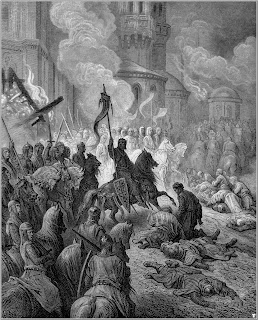 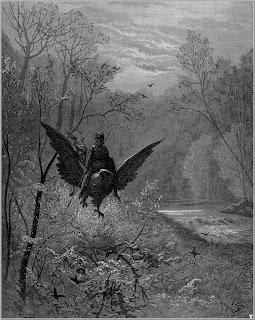 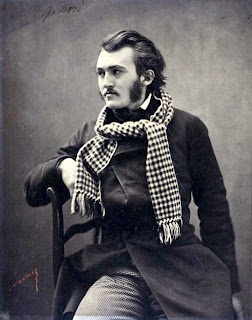