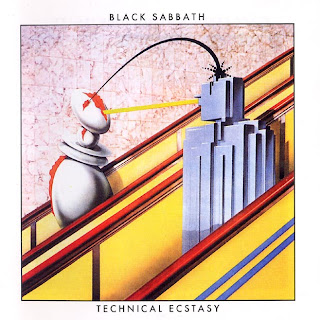 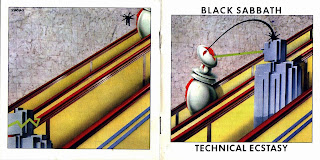 Technical Ecstasy continued the band's separation from its signature doom and darkness that had been such a trademark of the band's early career. While the album's lyrics dealt with topics such as drug dealers, prostitution, and transvestites, the music itself was seldom dark, and tracks like "Rock 'n' Roll Doctor" and "It's Alright" (the latter sung by drummer Bill Ward—a decision supported by Ozzy Osbourne), were very different from Black Sabbath's earlier recordings. Also, the band continued experimenting with keyboards and synthesizers more so than previous albums. The track "She's Gone" features orchestrations.

Osbourne left the band briefly following the release of the album. He would eventually rejoin for the follow-up album, Never Say Die!.

The cover art is designed by Hipgnosis and is meant to represent two robots having sex. Osbourne once described it as "two robots screwing on an escalator."[1]

The UK release had a two-sided lyric/credit-insert.

This artwork is, I believe, by George Hardie, not Barney Bubbles.

hey your right! thnx for the heads up.