Portrait of the artist as a holed man wins the day 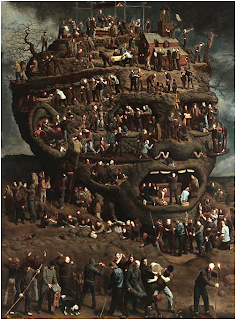 Most people paint one good portrait to win Australia's most famous art award, the Archibald Prize. This year Marcus Wills churned out more than 200 to claim a surprise victory.

The 34-year-old Melbourne artist was yesterday crowned the 2006 winner of the $35,000 prize for his surreal work The Paul Juraszek Monolith (after Marcus Gheeraerts), which depicts more than 200 figures crawling over a giant stone head.

It is Wills's first entry.

The work, inspired by an etching by the Flemish engraver Marcus Gheeraerts, features 29 individual portraits in various positions of the Melbourne sculptor Paul Juraszek.

Painting the same face that many times could get tiring for someone less tenacious, but Juraszek's shiny pate was an endless source of inspiration for Wills. "I quite like painting bald heads. Hair can be annoying to paint," he said yesterday.

Wills, 34, spent more than two years on the work and confessed he struggled to finish.

Among the faces he has portrayed, tucked away in the right-hand corner, is a sly little portrait of Wills himself, holding a Paul Juraszek puppet.

Wills's edged out well-known artists such as Ben Quilty, Jenny Sages and Adam Cullen to win, but was one of many Archibald entries to take a fellow artist as a subject.

"In every sense it is a most unexpected choice."

Especially so for the gallery's packing room worker Peter Tsangarides, who bet $30 on Wills's work in Sportingbet Australia's first ever Archibald tipping competition. At odds of 41:1 his long shot paid off.

"About $1200 has come in," he said yesterday, adding that he was drawn to the intricate painting. "You stand back and you just see a skull or whatever, but you look closer and it's full of all these people. I didn't think it would win because it's not the style they usually go for."

Asked if he would be buying a round for his packing room workmates, Mr Tsangarides pointed to the Archibald Prize celebratory function in the next room.

"Yeah, but the best time to win money is when there's free drinks at the bar," he laughed.

The 2006 Photographic Portrait Prize went to Vanila Netto for The Magnanimous Beige Wrap - Part 1 (Contraption). The Sulman Prize was won by Jiawei Shen for Peking Treaty 1901, and the Wynne Prize went to John Beard for The Gap.

The Archibald Prize is open to the public from today.