Azoth of the Philosophers 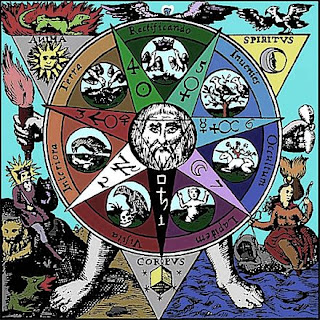 For more than 350 years, this image of the Azoth has been used by alchemists as a meditative mandala because it is believed to contain all the essential components of the Great Work.

Over the next eight weeks we are going to explore the elements of this alchemical mandala to discover a personal and powerful meditative process for using it to acquire an in depth understanding of the the seven key processes for creating the Philosopher’s Stone as well as participating in an initiation into a hermetic perspective that will enrich your life in ways that you have not yet imagined.

There are many explanations of the Azoth available on web sites and in numerous writings. However, I suggest you establish your own relationship with the Azoth before reading the interpretations of others. Spend personal time with the image during the next week identifying the messages it holds for you and developing your unique and special understanding of its symbols before listening to what I and others have to say about this eternal hermetic symbol.

Then each week for seven weeks we will examine in depth through a variety of methods the steps revealed in the Azoth for creating the Stone.

I look forward with excitement and expectation for participating with you in this ancient alchemical practice that will have a lasting impact on your life.

Interpretation of Azoth of the Philosophers (by Dennis William Hauck)

This meditative emblem first published in 1659 as an illustration for the book Azoth of the Philosophers by the legendary German alchemist Basil Valentine. The word "Azoth" in the title is one of the more arcane names for the One Thing. The "A" and "Z" in the word relate to the Greek alpha and omega, the beginning and end of all things. The word is meant to embrace the full meaning of the One Thing, which is both the chaotic First Matter at the beginning of the Work and the perfected Stone at its conclusion. 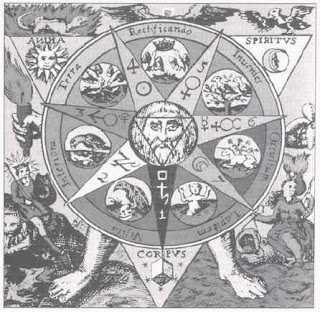 At the center of this striking drawing is the face of a bearded alchemist at the beginning of the Work. Like looking into a mirror, this is where the adept fixes his or her attention to meditate on the mandala. Within the downward-pointing triangle superimposed over the face of the alchemist is the goal of the Work, the divine man in which the forces from Above and Below have come together. Each of the sequentially numbered points on the star emanating from the alchemist stands for an operation in the Emerald Formula (Calcination, Dissolution, Separation, Conjunction, Fermentation, Distillation, and Coagulation) and contains the cipher for the corresponding metal. To see an explanation of these operations, click on the appropriate point on the star.

The alchemist’s schematized body is the offspring of the marriage between Sol, the archetypal Sun King seated on a lion on a hill to his right, and Luna, the archetypal Moon Queen seated on a great fish to his left. "Its father is the Sun," says the tablet, "its mother the Moon." The laughing, extroverted Sun King holds a scepter and a shield indicating his authority and strength over the rational, visible world, but the fiery dragon of his rejected unconscious waits in a cave beneath him ready to attack should he grow too arrogant. The melancholy, introverted Moon Queen holds the reins to a great fish, symbolizing her control of those same hidden forces that threaten the King, and behind her is a chaff of wheat, which stands for her connection to fertility and growth. The bow and arrow she cradles in her left arm symbolize the wounds of the heart and body she accepts as part of her existence. In simplest terms, the King and Queen represent the raw materials of our experience -- our thoughts and feelings -- with which the alchemist works.

The King symbolizes the power of thought, ultimately the One Mind of the highest spirit. The Queen stands for the influence of feelings and emotions, which are ultimately the chaotic One Thing of the greater soul. The much anticipated Marriage of the King and Queen produces a state of consciousness best described as a feeling intellect, which can be raised and purified to produce a state of perfect intuition, a direct gnosis of reality. "All Obscurity will be clear to you," says the tablet of this state of mind; it is "the Glory of the Whole Universe." The goal of alchemy is to make this golden moment permanent in a state of consciousness called the Philosopher’s Stone, and it all starts with the marriage of opposites within us.

In our drawing, the body of the alchemist is composed of the Four Elements. His feet protrude from behind the central emblem; one is on Earth and the other in Water. In his right hand is a torch of Fire and in his left a feather, symbolizing Air. Between his legs dangles the Cubic Stone labeled with the word Corpus, meaning body. The five stars surrounding it indicate that it also contains the hidden Fifth Element, the invisible Quintessence whose "inherent strength is perfected if it is turned into Earth." Where the head of the alchemist should be, there is a strange winged caricature that is variously interpreted as a heart, a helmet, or even the pineal gland at the center of the brain. The symbol evolved from the Winged Disk of Akhenaten and became the top of the Caduceus, the magical wand of Hermes where opposing energies merge to produce miracles. This knob represents the Ascended Essence, the essence of our souls raised to the highest level in the body, to the brain, where it becomes a mobile center of consciousness able to leave the body and travel to other dimensions.

Touching the wings of the caduceus are a salamander engulfed in flames on the left side of the drawing and a standing bird on the right. Below the salamander is the inscription Anima (Soul); below the bird is the inscription Spiritus (Spirit). The salamander, as a symbol of soul, is attracted to and exposed in the blazing fire of the Sun. Likewise, the bird of spirit is attracted to the coolness of the Moon and is reflected in it. This is a subtle statement of the fundamental bipolar energies that drive the alchemy of transformation. Spiritus, Anima, and Corpus form a large inverted triangle that stands behind the central emblem. Together they symbolize the three archetypal celestial forces that the alchemists termed Sulfur, Mercury, and Salt. Again, these chemicals are not chemicals at all, but our feelings, thoughts, and body.

- from THE EMERALD TABLET (Penguin 1999) by Dennis William Hauck

This thing looks awesome. I'm really into symbols right now. I am going to redraw this in my own way.... You always put up some inspirational stuff Tim. I also need one of those Yugoslavian monuments in my front yard.

Lol, you should definitely get one in the front yard. There is actually a huge Olmec head in somebodies front yard on the west side. It looks authentic too. Thanks for checking out the site man. I totally want to see your version of the Azoth man, that would be badass!!!