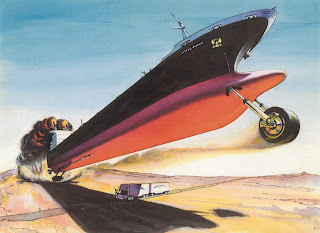 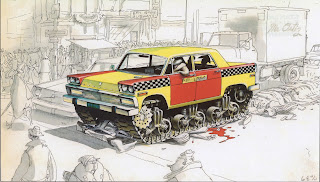 Mind-bending images and ideas from a fabulous cartoonist and a superb illustrator If you ever wondered what a steam locomotive racing might look like, or fantasized about driving the biggest baddest vehicle across the desert with its own supply of sharks and waterplanes, look no further - the eccentric imagination of Stan Mott might prove simply unmatched. We'll start with the (probably) the most outrageous picture we've seen this month: "The Supertanker Chopper"! - It's hard to summarize Stan Mott's interests in a few words. The man is brilliant and has done some really amazing things ... like ride a go-cart around the world!! Here is an info that appeared in the "Road & Track" Magazine, June 1979: 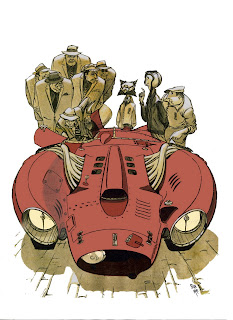 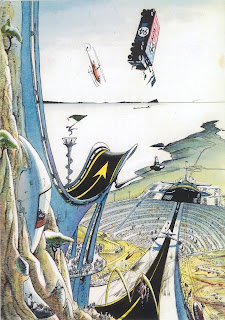 "It's impossible to type the zany, crazy Mott (who lives on a yacht - sometimes), one of our readers' favorite cartoonists / writers and co-founder of Automobili Cyclops, the firm that rocketed to fame in its first appearance in R&T in 1957. When we asked Stan to tell us about his life, he said, "Well, I escaped Flint, Michigan at an early age, owned 50-percent interest in a Cragar flathead A-bone roadster at 12, ran at El Mirage at 15, had first automotive cartoons published in Rosetta Timing Association's program in 1948. Went to Art Center College, developed sense of humor working in World's Greatest Rolling Clown Show (GM Styling Section). Then worked as fry cook, mercenary, airline pilot, art director of R&T, farmer, Wall Street broker, poet. Drove go kart around the world, became an Alpine guide, did freelance art work and smuggled. Helped found Automobili Cyclops SpA and hold position of propaganda minister in perpetuity. Now working philantropically to solve moral situations in Southern Mediterranian waters for the U.N." Stan refuses to talk about his CIA work, arctic exploration or his stint as a human cannon ball." From "The History of Tanks" (Racing Tanks, that is) When asked by our DRB team for an update on his life, Stan adds: "Since '79 I learned to fly gliders in Cyprus, did a "Captain Stan Show" in 1983-4 for Radio 103.2 in Mallorca, Spain, sailed the first Turkish caique across the Atlantic, roamed the Caribbean for seven years, settled here in Neuss, Germany. Also, I'm working on a 76-page graphic novel.". According to the Top Gear Magazine (Dec 2001): "The Captain Stan Show was a Pythonesque consciousness weird-out which must have left baffled tourists wondering if their Watney Red Barrel had been spiked." 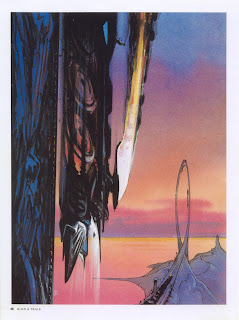 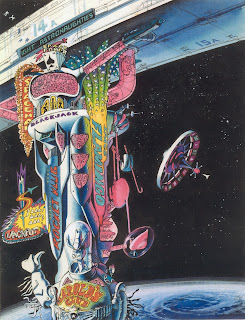 All images and artwork are copyright Stan Mott, used by permission. You can see more at S. Berliner's wonderful archive site of Stan's artwork - click here. Fantasy Steam Racing Locomotives "Les 24 Heures de Choo-Choo" ("The 24 Hours of Choo-Choo" - as in Le Mans): Other Wicked Fantasy Vehicles Here is the personal aircraft carrier for the impossibly wealthy Oil Sheik. The Sheik is sea-sick, so the carrier rolls on the dry ground, while the seaplanes land on its deck filled with water. Some sharks were provided to keep the waters free of Russian scuba diving spies. Of course, some may remember Stan Mott as the creator of "Cyclops" series of cartoons (a few "Cyclops" mini-cars were even manufactured by Automobili Cyclops SpA), which blessed the John Bond's great Road & Track Magazine with much fun and colour in the 60s. S. Berliner, III again provides an extensive coverage of this series - click here. Don't miss Stan's tongue-in-cheek tribute to the Soviet aircraft designer Igor Sokerov. It's brimming with radical aircraft technology ideas and is a lot of fun. And here is the man himself, surveying the terrain outside Quarzazate, Morrocco: 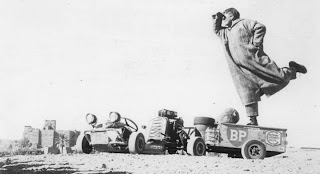 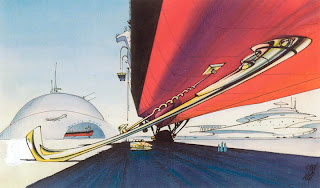 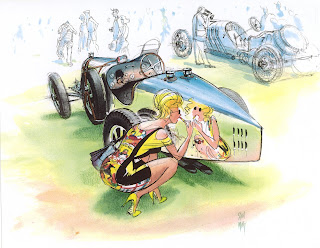 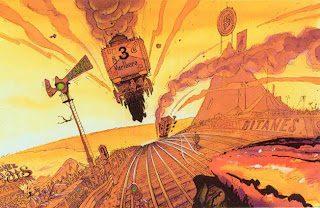 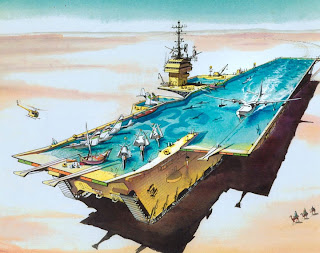 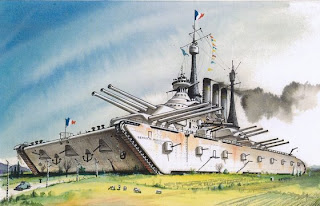 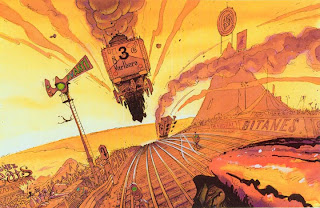 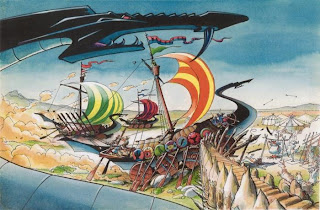 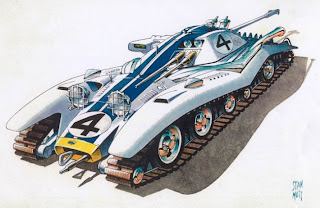 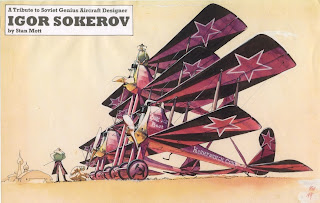