The Ephesian Artemis, the "great mother goddess" also mentioned in the New Testament(Acts,19), was extremely popular in the ancient world, as we might deduce from the fact that copies of her cult statue have been excavated in many parts of the Roman Empire. The first photo on this page is a statue from the Amphitheater of Lepcis Magna and is now in the Archaeological Museum of Tripoli.The goddess was originally, before her cult was taken over by the Greeks, called Artimus, and her temple -one of the Seven Wonders of the Ancient World- received gifts from the Lydian king Croesus (c.560-c.547). She is related to other Anatolian mother goddesses, like Cybele. The Ephesians believed that Artemis was born in Ephesus (and not on Delos, as was commonly assumed), and accepted the shrine as an asylum (Tacitus, Annals,3.61). Later, the Persians patronized the cult; the high priest was called theMegabyxus, a Persian name that means "the one set free for the cult of the divinity". The original cult statue was made of wood, but was probably lost after the great fire of 356 BCE.Although the statue as we know it was a substitute for the lost original, it retains several archaic 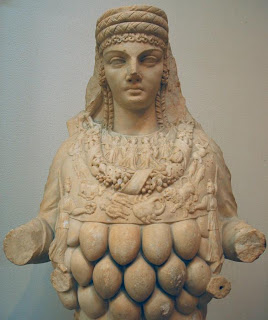 traits (e.g., her static pose). Still, many aspects can not be dated before the fourth century, and the statue from Lepcis illustrates this very well: it shows a zodiac on the dress that covers the upper part of her chest. On some copies, Artemis wears a mural crown, a Mesopotamian and Syrian motif that became popular in the Hellenistic age. The winged Victories to the left and right appear to be innovations as well, although they have archaic antecedents.On other copies, these elements are absent (e.g., instead of the Victories, we see lions), and they may be closer representations of the original. However, the fact that a statue with zodiac had been found in Ephesus (photo), strongly suggests that the astrological aspect was not altogether absent from the Ephesian cult.One of Artemis' characteristics is that she protects fertility. This may be symbolized by the spherical objects that cover the lower part of

her chest, but the common assumption that they are female breasts is incorrect. They probably represent the testicles of a bull, although they may also be gourds, which were known in Asia as fertility symbols for centuries. Artemis' robe is always decorated with lions, leopards, goats, griffins, and bulls, which represent Artemis' title of Lady of the Animals. 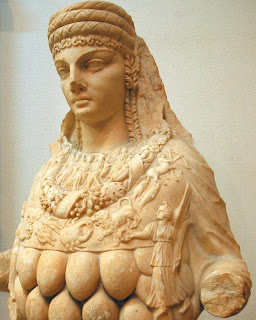 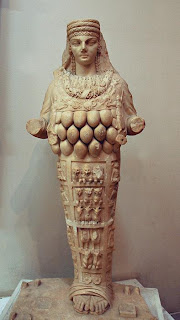 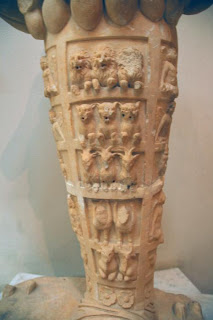