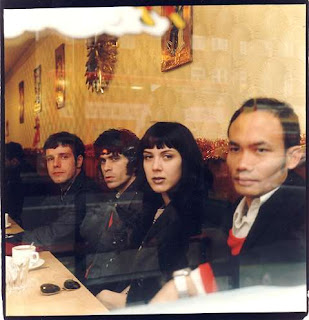 The Hedonist - Feb. 1998
Hedonist (Bob) - In the first interview we did with you, you said that you loved Gospel because you felt it was pure and hadn't been co-opted by anything. I was just wondering if you felt whether you or your music had been co-opted in any way and if you do/don't, what weapons do you use against this co-option?
I - Well, number one, we are part of the music industry, just because some group is on some minor-league label, it's still business. There is money changing hands and product being made. I don't see anything inherently noble about running a small business. But at the same time we try to present our ideas. It's the nature of the medium, the magazine, it literally flattens you, people don't think about this. You can look at a horrible picture of yourself, and you'll say "I don't look like that" and other people will say "You do, you look just like that". But no-one looks like a picture-- a picture is flat. Film is a little closer, think of a film, an enormous projection of life on a screen, it's not real, that is not what people really look like. People take it as a representation of reality, but it's not at all, it's a complete abstraction. So it's like speaking into a microphone, it's not your real voice, it's an electrical amplification of your voice. It has very little to do with the reality of the thing. Just as oratory on the page is very different from oratory live. Fidel Castro is a great public speaker, other people are not. I doubt Morrissey would be a great public speaker, if he was speaking in Revolution Plaza in Havana, I doubt he would get his point across very well. In the interview format, quipping is like a different medium. They're almost like different forms of music, quipping, bluster, rhetoric. In the magazine you are thoroughly a characiture, it's an obscenity, but what are you to do? Marshall MacLuhan has a lot of interesting ideas about type, about the Gutenburg press and the revolution it had on people sensibilities. The way it changed the space people acted in, people used to be much more touchy-feely orientated, but once type was invented people became much more visual; he says TV is kind of a return, a step-backward from printing induced social systems.
H - I understand what you mean by a magazine though, in that whatever you say will never represent you as the 3-D person that you really are.
I - But you can't get worried about that, in fact I would never, that's why we never talk about our personal lives. I mean most performers pontificate about the tawdry details of their lives.
H (Ewa) - Like what their favourite colour is, joke!!
H (Bob) - Yeah, actually we are going to get personal, I just wanted to know what motivated you to do this?
I - Well you know I'm more or less a savage... I don't know, a lot of people are . . . to me it's just that congregational thing, the power that music has and the medium of music, how it is essentially the only oratorical or idea thing. It's the only living art, it's the only real form of expression available to most people. It's not just totally corrupt don't you think?
H - No, not really, not at all. I'm most interested in why you aren't something like a painter for example?
(--My Favorite Part--)
I - Well, in America, painting is more of a ghetto, even more than music, it's way more driven by money. Basically, you look at the relationship between different art-forms and business and government. And of course the government is just the judicial wing of business. If you look at art, in the 40's the socialist world, the Communist partisans had led the resistance against the Nazis and had earned the sympathies of the people through that. When America and the UK went into these countries, they killed off the socialist resistance and installed people who had been Nazi collaborators, thus ensuring that capitalism prevailed. You notice that the big 3 after the war were Germany, USA and Japan, the fascist powers. In Italy for example, the Communist partisans won the war basically against the Germans and the Allies took over and installed Victor Immanuel, the King under Mussolini, they made pacts with the Mafia. And they basically made sure that capitalist interests would prevail.
But the point is, that in the post-war period, socialism was gaining ground and it had a lot of support, especially among the intelligentia and the artists. What the USA had to do was prove that a capitalist, free market country could support an Avant-Garde movement. So the CIA introduced abstract expressionism, through (art critic/theorist) Clement Greenberg. Greenberg basically told abstract expressionists and Jackson Pollock how to paint. And then they constructed a formula in which notably socialist art, socialist realism or Constructivism and anything that had a political programme was excluded. You'll notice that before the 1940's art was very political, whereas Abstract-Expressionists, like Pollock, De Kooning, etc. had no politics, and art that had content was declared to be adolescent, and that's prevailed ever since and that is why Art today is not so interesting to me.

The Make Up - found on their myspace
Posted by Tim Razo at 1:32 PM