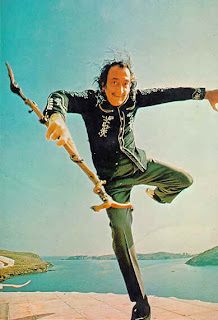 Salvador Domingo Felipe Jacinto Dalí i Domènech, 1st Marquis of Púbol (May 11, 1904 – January 23, 1989), was a Spanish surrealist painter born in Figueres, Catalonia, Spain. Dalí was a skilled draftsman, best known for the striking and bizarre images in his surrealist work. His painterly skills are often attributed to the influence of Renaissance masters.[1][2] His best known work, The Persistence of Memory, was completed in 1931. Salvador Dalí's artistic repertoire also included film, sculpture, and photography. He collaborated with Walt Disney on the Academy Award-nominated short cartoon Destino, which was released posthumously in 2003. He also collaborated with Alfred Hitchcock on Hitchcock's film Spellbound.

Dalí insisted on his "Arab lineage", claiming that his ancestors were descended from the Moors who occupied Southern Spain for nearly 800 years (711-1492), and attributed to these origins, "my love of everything that is gilded and excessive, my passion for luxury and my love of oriental clothes."[3]

Widely considered to be greatly imaginative, Dalí had an affinity for doing unusual things to draw attention to himself. This sometimes irked those who loved his art as much as it annoyed his critics, since his eccentric manner sometimes drew more public attention than his artwork.[4] The purposefully-sought notoriety led to broad public recognition and many purchases of his works by people from all walks of life.