The Man from Utopia - Frank Zappa | Artwork by Tanino Liberatore 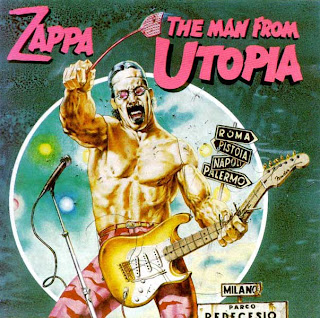 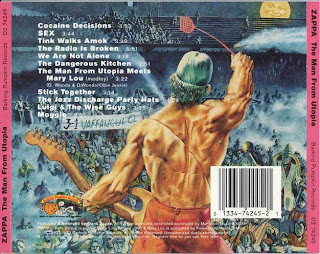 The Man from Utopia is a 1983 album by Frank Zappa. It is a more song-driven, and less conceptual work than many others in Zappa's oeuvre. The album is named after a 1950s song, written by Donald and Doris Woods, which Zappa covers as part of "The Man from Utopia Meets Mary Lou".[1]

The sleeve art features the work of RanXerox artist Tanino Liberatore. It portrays Zappa on stage trying to kill mosquitos. The back cover shows the audience as seen from the stage. Chaos prevails, and the cover is meant to show the events at a disastrous concert in Palermo, Italy, July 14, 1982. At that concert, fans kept trying to rush the stage, and the local security force began firing tear-gas canisters into the crowd. Zappa and his band continued to perform, but were forced to flee when the gas became unbearable, and live ammunition (presumably from the audience) was fired. Backstage footage can be found on The Dub Room Special. The album was the second of two to credit Steve Vai with "impossible guitar parts" (the first being Ship Arriving Too Late To Save A Drowning Witch).