Statue of Shapur I Sassanid at Cave of Shapoor 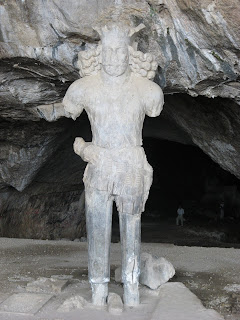 The entrance of this cave is one of the largest in Iran. It is a 20m wide and 5m high portal leading to a 50x100m big and up to 12m high chamber. At the far end various short passages start, which may be explored. Appropriate equipment is needed, especially good light. We have no information about the difficulty of the visit, however, the archaeological remains in the entrance hall are very easy to visit.

In the middle of the entrance hall is a 1,800 years old statue of Shapoor I., the Great (241-272). About 1,400 years ago, after the collapse of the Sassanid dynasty, it was pulled down and lost one of its legs. About 70 years ago, the arms of the statue were also broken. 30 years ago a group of enthusiasts raised it on its feet and fixed the foot with iron and concrete.

The story how the arm was destoyed seems to be true, but it sounds like a legend. 70 years ago, a young man from the Qashqaie tribe, who own this area, fell in love with a girl. The girl's father asked the young man to prove his courage by going to the cave at night. The young man went to the cave the same night, ignoring the danger of wild animals. He brought a stick with him, which he rammed into the floor beneath the statue, to prove he had been there. He did not have light, and in the complete darkness he did not mention that he nailed the long tail of his traditional costume into the floor too. When he tried to leave, he was hold back by his cloth, and as he thought he was grabbed by the statue he got a heart failure and died beside the statue. In the morining some people looked for him, and found him dead in the cave. The young man's brother thought the statue had caused his death (which was partly true...) and threw big stones at it until one of its arms was broken.

7 meter tall statue of Shapur I Sassanid king of Persian empire that captured Valerian the Roman emperor, located at Tang-e-Chowgan in front of a mysterious cave, near Kazeroun, Southern Iran. 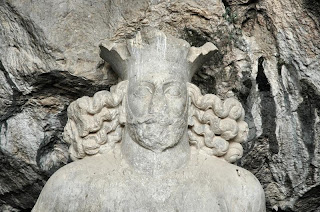 Email ThisBlogThis!Share to TwitterShare to FacebookShare to Pinterest
Labels: Cave of Shapoor, sculpture, Statue of Shapur I Sassanid