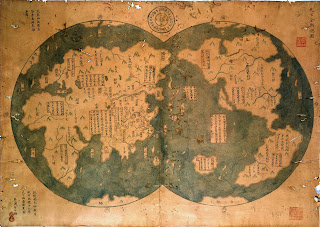 In 1405, Zhu Di sent his favorite Admiral, Zheng He, on a mission to unite the peoples of the "Four Seas"—that is, the World Family. Midway through this enormous undertaking of many overseas voyages, a Ming artist prepared this elegant but somewhat stylized version of the world. It was based on information contained in a variety of field maps and navigational charts. The composite map was intended to represent the final unification of the World Family under the leadership of the Ming Dynasty. It was a visual testimonial about foreign nations (or barbarians) that paid homage to the Son of Heaven in Beijing. It was also a memorial to the role of world commerce in preserving the peace between nations; and it was a graphic representation of the system of transoceanic routes that formed Zheng He's colossal maritime trade network. Zhu Di's dream of a United Family did not last for very long.

Within a few years, Portuguese spies obtained copies of this map. And they used it as the principal tool in world conquest. During that conquest, Europeans claimed they were superior because they had better weapons and maps. They boasted that "the Victor writes the history." And so, the legacy of Zheng He and the heritage of other ancient voyagers faded into the twilight of Western doctrine.

This is a revolutionary map. It will finally force Western scholars to abandon the doctrine of Eurocentrism that has dominated world history for the past 500 years. In the 21st century, the Global Community needs a factual history that reflects the true events of the past. This map can precipitate a paradigm shift in history. Such a paradigm shift is essential in order to dislodge the medieval cultural anchors that are holding us back. Then we can truly build a philosophical foundation of equality for the Whole World Family.

In January 2006, BBC News and The Economist both published news regarding the exhibition of a Chinese sailing map with detailed descriptions of both Native Americans and Native Australians. The map (at right) was dated 1763, and was supposedly a copy of an earlier map made in 1418. Supporters of Gavin Menzies' 1421 theory claim the map as proof that Zheng He sailed to the Americas and Australia. Critics point out that the map, if authentic, is more likely to be based on an eighteenth-century European map.

According to the map's owner, Liu Gang, a Chinese lawyer and collector, he purchased the map in 2001 for $500 USD from a Shanghai dealer. A number of authorities on Chinese history have questioned the authenticity of the map. Some point to the use of the Mercator-style projection, its accurate reckoning of longitude and its North-based orientation. None of these features was used in the best maps made in either Asia or Europe during this period (for example see the Kangnido map (1410) and the Fra Mauro map (1459)). Also mentioned is the depiction of the erroneous Island of California, a mistake commonly repeated in European maps from the sixteenth to eighteenth centuries. On the map the American continent is labelled phonetically "A-me-ri-ca" (今名北亞墨利加, literally: "Now Name Northern A-me-ri-ca," see detail). This translation was unknown in Ming Dynasty, and is known to be a borrowing from the West, (Amerigo Vespucci).

Geoff Wade of the Asia Research Institute at the National University of Singapore has strongly disputed the authenticity of the map and has suggested that it is either an 18th or 21st-century fake. Wade has pointed out a number of anachronisms that appear in the map and its text annotations. For example, in the text next to Eastern Europe, which has been translated as "People here mostly believe in God and their religion is called 'Jing' (景, referring to Nestorianism)", Wade notes that the Chinese word for the Christian God is given as "Shang-di" (上帝), which is a usage that was first borrowed from Chinese ancient text by Jesuit missionary Matteo Ricci in the 16th century.[49]

In May 2006 the Dominion Post reported that Fiona Petchey, head of the testing unit at Waikato University, which had carbon dated the map, had asked Gavin Menzies to remove claims from his website that the dating proved the map was genuine. The carbon dating indicated with an 80% probability a date for the paper of the map between either 1640–1690 or 1730–1810. However as the ink was not tested, it was impossible to know when it was drawn. Ms Petchey said, "we asked him to remove those, not because we were not happy with the dates, but because we were not overly happy with being associated with his interpretations of those dates."[50]