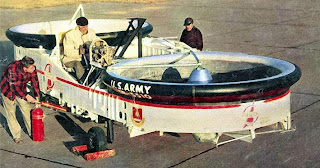 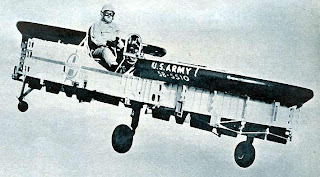 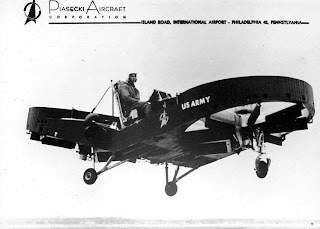 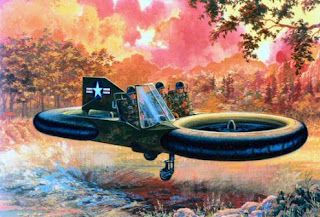 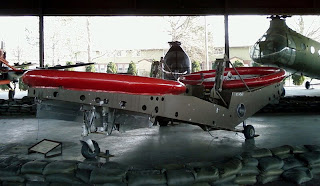 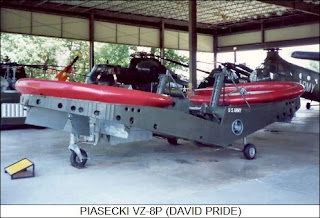 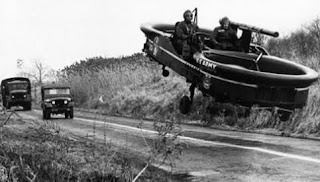 * While the Army was pursuing the flying platforms, they were also investigating larger rotorcraft along similar lines, called the "flying jeeps". Some sources imply that they were intended mostly for hovercraft operation, with an ability to fly over obstacles or impassable terrain when necessary, while other sources indicate they were regarded as helicopter-like utility vehicles that operated normally as flying machines. Whatever the case, the US Army Transportation Research Command began an investigation into the flying jeeps in 1956, leading to award of contracts for prototypes to Chrysler, Curtiss-Wright, and Piasecki in 1957.

* Chrysler developed two prototypes of their "VZ-6" flying jeep, delivering them to the Army in late 1958. The VZ-6 was a single-seat vehicle, shaped like a rectangular box, with two ducted rotors in the box front and back. There were rubber skirts around the bottom, and vanes underneath the rotors to provide airflow for forward motion.

The VZ-6 was powered by a single 373 kW (500 HP) piston engine and had a gross weight of 1,080 kilograms (2,380 pounds). Tethered flights performed in 1959 indicated that the VZ-6 was not very controllable, and was also badly underpowered. On the VZ-6's first untethered flight attempt, it flipped over. The pilot escaped serious injury, but the vehicle was badly damaged. The Army recognized the VZ-6 as a lost cause and got rid of both prototypes in 1960.

* The Curtiss-Wright entry was the "VZ-7", also known as the "Flying Truck", with two prototypes delivered to the Army in mid-1958. The VZ-7 was a simple metal truss with a pilot up front and four horizontal propellers at each of four corners. The props were all driven by a single 317 kW (425 SHP) Turbomeca Artouste turboshaft engine, mounted underneath the central beam. The props were originally ducted, but the ducts were removed after initial test flights. The aircraft was guided by differential pitch between the propellers, and a rudder in the turbine exhaust.

* The Piasecki flying jeep effort was the most successful of the three. The first of the class was the Piasecki "Model 59H AirGeep", which was given the Army designation "VZ-8P". The AirGeep was 7.9 meters long and 2.7 meters wide (26 feet by 9 feet), with three-bladed rotors in ducts in the front and the back. The pilot and passenger sat between the ducts. In the VZ-8P, the 2.4 meter (8 foot) diameter rotors were driven by a pair of 134 kW (180 HP) Lycoming piston engines, with the power linkages designed so that one engine could drive both rotors if the other engine failed.

The rotors spun in opposite directions to reduce torque effects. Control was provided by varying rotor pitch, as well as through vanes mounted in the downdraft. Forward motion was achieved by pitching the aircraft nose-down.

The AirGeep was first flown on 12 October 1958. Apparently it proved grossly underpowered, barely able to fly over a fence, and it was sent back to the shop, where the piston engines were replaced by a single 317 kW (425 HP) Turbomeca Artouste IIB turbine engine. The upgraded AirGeep flew in late June 1959. It weighed 1.1 tonnes (2,500 pounds) and could carry a payload of 550 kilograms (1,200 pounds), including the pilot.

The AirGeep was put through trials for both the Army and the Navy over the next few years. The engine was upgraded again to a Garrett / Airesearch 331-6 engine, which had a higher power-to-weight ratio. For Navy trials, which began in June 1961, the rotorcraft was fitted with floats, and redesignated the "PA-59 SeaGeep".

* Piasecki wanted to build a bigger and better AirGeep, and the Army Transportation Research Command obliged them by issuing a contract for what Piasecki called the "Model 59K" and what the Army called the "VZ-8P(B) AirGeep II", which made its first flight in the summer of 1962.

The AirGeep II was similar to the AirGeep, except that the aircraft was "bent" in the middle so that the rotors were tilted fore and aft, it seems to improve forward flight characteristics. The AirGeep II used twin 298 kW (400 SHP) Turbomeca Artouste IIC turboshaft engines, once again linked so that if one failed the other would drive both rotors. One engine could also be coupled to the landing wheels to drive the machine on the ground. The increased power allowed a maximum take-off weight of 2.2 tonnes (4,800 pounds). The pilot and observer had "zero-zero" ejection seats, allowing safe escape if the machine was on the ground and standing still, and there were apparently seats for additional passengers.

* The flying platforms and flying jeeps had some merits. They were smaller than helicopters, and could operate in ground cover more successfully. However, helicopters could land more easily on rough terrain and had more convenient seating arrangements. Most critically, the flying platforms and jeeps had much smaller rotors, and so were fuel hogs. There were also apparently concerns about the practicality of the one-person flying platforms, since they provided relatively little capability in relationship to larger rotary-winged aircraft, while still presenting a good proportion of the same support headaches. Some sources also claim, very plausibly, that the flying platforms were unusually dangerous to fly in windy conditions. In short, they didn't have sufficient advantages over helicopters to make them worth further development at the time. The idea didn't die out, however.

If this idea had taken off, we would all be using this concept as a car instead of using wheels. Wouldnt you rather be flying around instead of driving on the ground? I would! This just proves that we have had the technology for over 60 years and failed to implement it. WOW! As a helicopter mechanic and GA pilot, I know that we can make aircraft such as this fly!