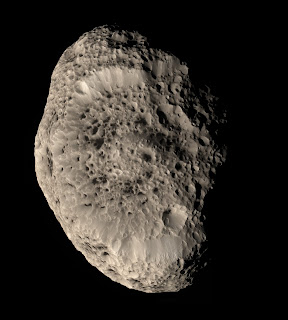 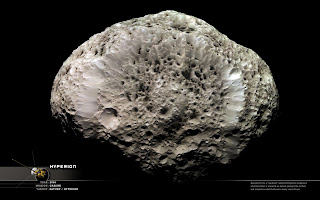 Hyperion (pronounced /haɪˈpɪəriən/,[11] or as in Greek Ὑπερίων), also known as Saturn VII, is a moon of Saturn discovered by William Cranch Bond, George Phillips Bond and William Lassell in 1848. It is distinguished by its irregular shape, its chaotic rotation, and its unexplained sponge-like appearance.

The moon is named after Hyperion, the Titan god of watchfulness and observation - the elder brother of Cronus, the Greek equivalent of Saturn - in Greek Mythology. It is also designated Saturn VII. The adjectival form of the name is Hyperionian.

Hyperion's discovery came shortly after John Herschel had suggested names for the seven previously-known satellites of Saturn in his 1847 publication Results of Astronomical Observations made at the Cape of Good Hope.[12] William Lassell, who saw Hyperion two days after William Bond, had already endorsed Herschel's naming scheme and suggested the name Hyperion in accordance with it.[13] He also beat Bond to publication.[14]

Hyperion is one of the largest highly irregular (non-spherical) bodies in the solar system (second to Proteus). It has about 15% of the mass of Mimas, the least massive spherical body. The largest crater on Hyperion is approximately 121.57 km in diameter and 10.2 km deep. A possible explanation for the irregular shape is that Hyperion is a fragment of a larger body that was broken by a large impact in the distant past.[15]

Like most of Saturn's moons, Hyperion's low density indicates that it is composed largely of water ice with only a small amount of rock. It is thought that Hyperion may be similar to a loosely accreted pile of rubble in its physical composition. However, unlike most of Saturn's moons, Hyperion has a low albedo (0.2–0.3), indicating that it is covered by at least a thin layer of dark material. This may be material from Phoebe (which is much darker) that got past Iapetus. Hyperion is redder than Phoebe and closely matches the color of the dark material on Iapetus.

Voyager 2 passed through the Saturn system but photographed Hyperion only from a distance. It discerned individual craters and an enormous ridge but was not able to make out the texture of the moon's surface. Early images from the Cassini orbiter suggested an unusual appearance, but it was not until Cassini's sole targeted flyby of Hyperion on 25 September 2005 that the moon's oddness was revealed in full.

Hyperion's surface is covered with deep, sharp-edged craters that give it the appearance of a giant sponge. Dark material fills the bottom of each crater. The reddish substance contains long chains of carbon and hydrogen and appears very similar to material found on other Saturnian satellites, most notably Iapetus.

The latest analyses of data obtained by NASA's Cassini spacecraft during its flybys of Hyperion in 2005 and 2006 show that about 40 percent of the moon is empty space. It was suggested in July 2007 that this porosity allows craters to remain nearly unchanged over the eons. The new analyses also confirmed that Hyperion is composed mostly of water ice with very little rock. "We find that water ice is the main constituent of the surface, but it's dirty water ice," said Dale Cruikshank, a researcher at the NASA Ames Research Center.[16] 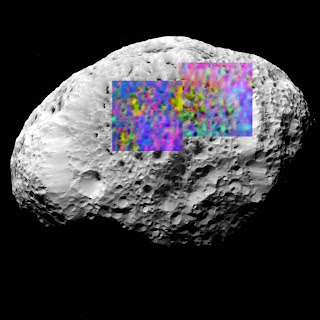 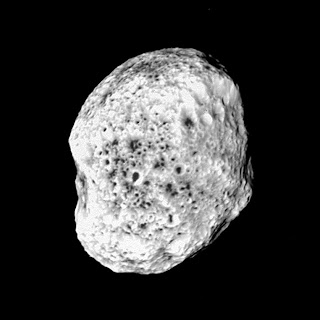 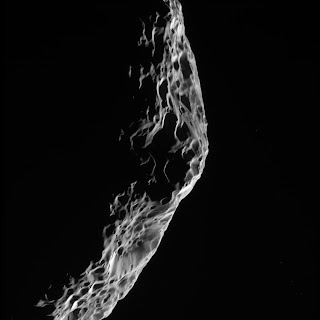