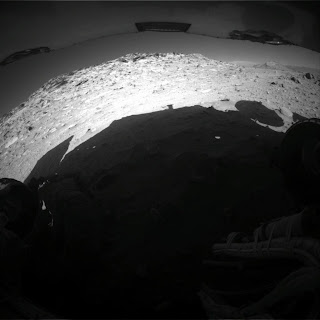 Update: The latest from NASA on the Mars Rover Spirit:
‘No communication has been received from Spirit since Sol 2210 (March 22, 2010).’
NASA has removed two of the Spirit Sol 2169 images, ‘Spirit Front Hazcam 2169′.
The above image, a screenshot from NASA’s Mars Rover gallery. The reason why we captured the screenshot, it contains the Mars Exploration Rover Mission image labeled Spirit :: Rear Hazcam :: Sol 2169. Over at Youtube, the discovery of the UFO video UFO EXCLUSIVE! Breaking News Clear UFO Base Caught on Cam By Mars Rovers December 2010. The video posted by OnLifeMars. A video which highlights the NASA Mars Rover image. Our screenshot, verification the NASA image in the video, is the original image from NASA.
Watch the video and see what you think. Does the Mars Rover image contain what seems to be ‘structures’, a ‘UFO base’ on Mars? Extraterrestrial ‘type’ structures and what seems to be a ‘spaceship’?

A comparison of the ‘structure’ in the Sol 2169 image to a photo of the Spiritlanding platform:

Mars Rover Spirit Platform
In February, NASA posted an image of the same ‘view’. With the following caption:

More info on Spirit from NASA in the February update:

NASA’s Mars Exploration Rover Spirit is now parked for the winter. The rover team is commanding Spirit this week to make additional preparations for the Mars southern hemisphere winter season. The team does not plan further motion of the wheels until spring comes to Spirit’s location beside the western edge of a low plateau called Home Plate.
On Sol 2169 (Feb. 8, 2010), the rover’s last drive before winter changed the angles of its suspension system, but it did not produce a hoped-for improvement to the overall tilt of the solar array for catching winter sunshine. Drives since Sol 2145 (Jan. 15, 2010) moved Spirit 34 centimeters (13 inches) south-southeastward. However, a counterclockwise yawing of the rover during the drives prevented it from reducing its southerly tilt.
Spirit will spend the coming winter tilted 9 degrees toward the south, an unfavorable attitude for the solar panels to catch rays from the sun in the northern sky. Spirit’s parking positions for its previous three Martian winters tilted northward. Engineers anticipate that, due to the unfavorable tilt for this fourth winter, Spirit will be out of communication with Earth for several months.
Spirit may enter a low-power hibernation mode within a few weeks, shutting down almost all functions except keeping a master clock running and checking its power status periodically until it has enough power to reawaken. It may go in and out of this mode a few times at the beginning and at the end of an extended hibernation period.

Spirit Remains Silent at Troy – sols 2471-2477, Dec. 15-Dec. 21, 2010:
No communication has been received from Spirit since Sol 2210 (March 22, 2010).
The project continues to listen with the Deep Space Network and Mars Odyssey orbiter for autonomous recovery communication from a low-power fault case. The project is also conducting a paging technique called “Sweep & Beep” to stimulate the rover in the case of a mission-clock fault. The period of maximum solar insolation (energy production) occurs around mid-March 2011.
Total odometry is unchanged at 7,730.50 meters (4.80 miles).

Currently at the NASA website Mars Rover photo gallery, two images, ‘Spirit Front Hazcam 2169‘ have been removed by NASA. The message: 404 Not Found.

Ok, No E.T., No UFO. the object is a Spirit. Pohotonic.cz