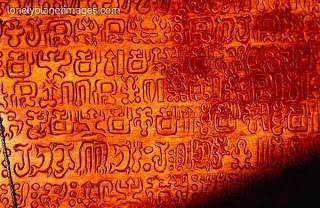 THE TABLET WRITING OF ANCIENT TIMES
The Deniart RongoRongo series contains 292 unique symbols based on the inscriptions found on ancient tablets from Easter Island.

Many attempts have been made to decipher the script and efforts are continuing to this day. Unlike many writing systems of ancient times, rongorongo is a mixed script, not an alphabet nor a syllabic script.

There are approximately 120 basic rongorongo glyphs and these basic glyphs (main signs) are then affixed (prefixed, infixed, and suffixed), fused (one glyph atop another), and compounded. A "normal rongorongo glyph" can be a mixture of any of these. Each affix, for example a basic glyph of a person in a given position, like a arm pointing in a given direction, adds a different meaning and may change given the context in which it is positioned. As such, it can be said that there may be an almost indefinite number of combinations which in turn may give an indefinite number of meanings and we are not able to provide a translation guide at this time due to these complexities.

The famous Moai (big brooding stone statues) are amazing. An island population, which probably never exceeded 15000 people, carved over 1000 of them and erected them all round the coast on straight stone platforms overlooking the villages (their backs to the sea). With their huge red topknots and staring white coral and black obsidian eyes, the villagers can never have forgotten that their important ancestors were watching them! The biggest Moai is 21m tall and weighs about 250 tons but was probably too big to move without metals or animals and still lies in the quarry. Another, 10m tall and over 90 tons is amongst those which have recently been re-erected, but a huge modern crane was imported for the job. The ancient Rapa Nui people also developed a form of writing rongorongo) which has still not been deciphered as only a few examples carved on wooden tablets have survived. Alas, the moais got too many and too big; all the island trees were cut down for statue transport and the culture came to an abrupt end with civil war and the deliberate casting down of almost all the statues just before the first European visitors in 1722. Later, slavery and smallpox reduced the Rapa Nui people to just a few hundred but before that, in the 18th and 19th centuries, the "bird-man" cult flourished as the petroglyphs and reconstructed dwellings at Orongo bear witness.

Ed: The symbols on the Rongorongo include a fascinating multitude of little figures of men in a variety of positions, flying birds, animals, and what appear to be plant, celestial objects, and geometrical forms. They are complex in detail yet at the same time drawn with calligraphic flow. There are hundreds of different signs - far too many to suggest any sort of phonetic alphabet. 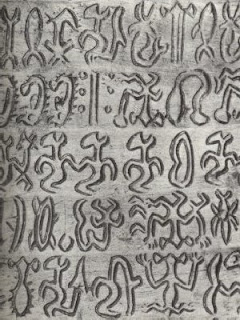 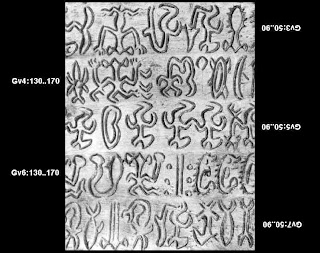 Rongorongo (pronounced /ˈrɒŋɡoʊˈrɒŋɡoʊ/ in English, [ˈɾoŋoˈɾoŋo] in Rapa Nui) is a system of glyphs discovered in the 19th century on Easter Island that appears to be writing or proto-writing. It cannot be read despite numerous attempts at decipherment. Although some calendrical and what might prove to be genealogical information has been identified, not even these glyphs can actually be read. If rongorongo does prove to be writing, it could be one of as few as three or four independent inventions of writing in human history.[note 1]

Two dozen wooden objects bearing rongorongo inscriptions, some heavily weathered, burned, or otherwise damaged, were collected in the late 19th century and are now scattered in museums and private collections. None remain on Easter Island. The objects are mostly tablets shaped from irregular pieces of wood, sometimes driftwood, but include a chieftain's staff, a bird-manreimiro ornaments. There are also a few petroglyphs which may include short rongorongo inscriptions. Oral history suggests that only a small elite was ever literate and that the tablets were sacred. statuette, and two

Authentic rongorongo texts are written in alternating directions, a system called reverse boustrophedon. In a third of the tablets, the lines of text are inscribed in shallow fluting carved into the wood. The glyphs themselves are outlines of human, animal, plant, artifact and geometric forms. Many of the human and animal figures, such as 200

, have characteristic protuberances on each side of the head, possibly representing ears or eyes.

Individual texts are conventionally known by a single uppercase letter and a name, such as Tablet C, the Mamari Tablet. The somewhat variable names may be descriptive or indicate where the object is kept, as in the Oar, the Snuffbox, the Small Santiago Tablet, and the Santiago Staff. 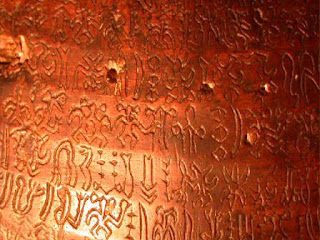 Great blog! I am surprised why these profound tablets are continued to be a lost description of life. I wish I could translate them to unlock what ancient knowledge they demonstrate.