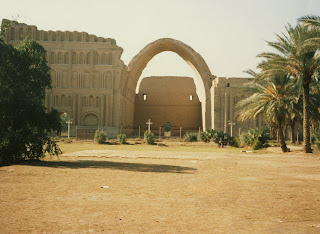 The Arch of Ctesiphon

Mud brick was the most common building material in Mesopotamia, until the advent of modern concrete. Baked bricks were only used for major projects such as the arch at Ctesiphon, just outside Baghdad, part of a palace built by Sasanian kings in the sixth century AD.

The Sasanians were an Iranian dynasty, but they used traditional Mesopotamian building techniques. The arch, a huge open audience hall 30m (98ft) high and some 43m (141ft) long, should have required massive scaffolding, but the Mesopotamians leant the courses of brickwork back at an angle, so that each course was built against its predecessor, and only a mobile tower for the builders was necessary. The arch was flanked by façades decorated with blank arcading and pilasters, but the one on the right collapsed a century ago.

Ctesiphon, the imperial capital of the Parthian Arsacids and of the Persian Sassanids, was one of the great cities of ancient Mesopotamia. In the 6th century, Ctesiphon was the largest city in the world.[1]

The ruins of the city are located on the east bank of the Tigris, across the river from the Hellenistic city of Seleucia. Today, the remains of both cities lie in Iraq, approximately 35 km south of the city of Baghdad

The Latin name Ctesiphon or Ctesifon (pronounced /ˈtɛsɨfɒn/) derives from Greek KtēsiphōnΚτησιφῶν), a Hellenized form of a local name that has been reconstructed as Tosfōn or Tosbōn.[2] In Iranian sources of the Sassanid period it is attested in Manichean Parthian, in Sassanid Middle Persian and in Christian Sogdian as Pahlavi tyspwn, continuing in New PersianTisfun (تيسفون). In medieval Arabic texts the name is usually Ṭaysafūn (طيسفون) or Qaṭaysfūnal-Mada'in (المدائن). "According to Yāqūt [...], quoting Ḥamza, the original form was Ṭūsfūn or Tūsfūn, which was arabicized as Ṭaysafūn."[3] The Armenian name of the city was Tizbon (Տիզբոն). Ctesiphon is first mentioned in the Book of Ezra of the Old Testament as Kasfia/Casphia (a derivative of the ethnic name, Cas, and a cognate of Caspian and Qazvin). 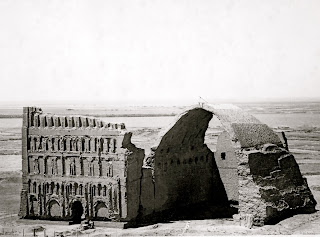 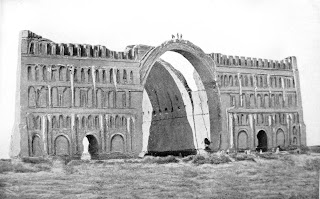 Ctesiphon rose to prominence during the Parthian Empire in the 1st century BC, and was the seat of government for most of its rulers. The city was located near Seleucia, the Hellenistic capital. Strabo abundantly describes its foundation:

In ancient times Babylon was the metropolis of Assyria; but now Seleuceia is the metropolis, I mean the Seleuceia on the Tigris, as it is called. Near by is situated a village called Ctesiphon, a large village. This village the kings of the Parthians were wont to make their winter residence, thus sparing the Seleuceians, in order that the Seleuceians might not be oppressed by having the Scythian folk or soldiery quartered amongst them. Because of the Parthian power, therefore, Ctesiphon is a city rather than a village; its size is such that it lodges a great number of people, and it has been equipped with buildings by the Parthians themselves; and it has been provided by the Parthians with wares for sale and with the arts that are pleasing to the Parthians; for the Parthian kings are accustomed to spend the winter there because of the salubrity of the air, but they summer at Ecbatana and in Hyrcania because of the prevalence of their ancient renown.[4]

( as (قطيسفون), in Modern Arabic

Because of its importance, Ctesiphon was a major military objective for the leaders of the Roman Empire in its eastern wars. The city was captured by Rome or by its successor state, the Byzantine Empire, five times in its history, three times in the 2nd century alone. The emperor Trajan captured Ctesiphon in 116, but his successor, Hadrian, decided to willingly return Ctesiphon, in 117, as part of a peace settlement. The Roman general Avidius Cassius captured Ctesiphon during another Parthian war in 164, but abandoned it when peace was concluded. In 197, the emperor Septimius Severus sacked Ctesiphon and carried off thousands of its inhabitants, whom he sold into slavery. 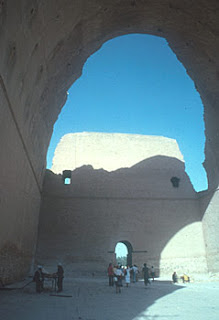 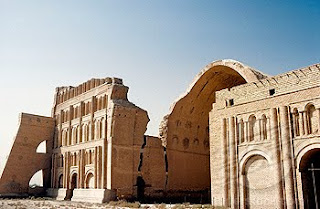 Late in the 3rd century, after the Parthians had been supplanted by the Sassanids, the city again became a source of conflict with Rome. In 283, emperor Carus sacked the city uncontested during a period of civil upheaval. In 295, emperor Galerius was defeated outside the city. However, he returned a year later with a vengeance and won a tremendous victory which ended in the fifth and final capture of the city by the Romans in 299. He returned it to the Persian king Narses in exchange for Armenia and western Mesopotamia. In c.325 and again in 410, the city, or the Greek colony directly across the river, was the site of church councils for the Church of the East.

Emperor Julian was killed following a battle outside of the city walls, in 363, during his war against Shapur II. Finally, in 627, the Byzantine Emperor Heraclius surrounded the city, the capital of the Sassanid Empire, leaving it after the Persians accepted his peace terms.

Ctesiphon fell to the Muslims during the Islamic conquest of Persia in 637 under the military command of Sa'ad ibn Abi Waqqas during the caliphate of Umar. However, the general population was not harmed but the palaces and their archives were burned. Still, as political and economic fortune had passed elsewhere, the city went into a rapid decline, especially after the founding of the Abbasid capital at Baghdad in the 8th century, and soon became a ghost town. It is believed to be the basis for the city of Isbanir in the Thousand and One Nights.

The ruins of Ctesiphon were the site of a major battle of World War I in November 1915. The Ottoman Empire defeated troops of Britain attempting to capture Baghdad, and drove them back some 40 miles (64 km) before trapping the British force and compelling it to surrender. 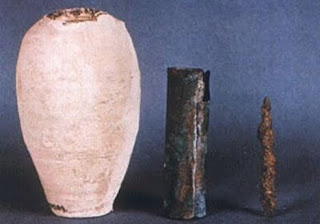 These strange artefacts were originally discovered in 1936 during an archaeological dig at village of Khuyut Rabbou'a which is located approximately 20 miles south east of the city centre of modern Baghdad and close to the Arch of Ctesiphon. Described as 13 – 14cm in height they contained a copper cylinder and within this was suspended an iron rod. In December 1939, shortly after the start of World War II a German archaeologist by the name of Wilhelm Konig came across the item in the basement of the National Museum of Iraq. He immediately recognised their similarity to galvanic batteries and published a paper that suggested that these ancient electrical devices may have been used for electroplating precious gold onto silver. It is around this time that Adolf Hitler began a serious, if eccentric, programme to study the technology of the ancients. Relatively modern films such as “Raiders of the Lost Ark” are based on this obscure reality. There is no easy explanation for the Baghdad Battery and naturally this has created controversy, debate and disagreement in the scientific community. Reconstructions of this device have proved that it could generate an electrical current of between 0.4 and 1.9 volts. Naturally, some scientists dispute these claims and argue that the reconstructions are inaccurate. (Those scientist just love a good dispute – it’s the scientific equivalent of arguing with you history teacher to make sure that everyone else notices that you’re still in the class.)

Some of the greatest mysteries are those that surround ancient gadgets. Because of their antiquity, we may never truly know how they were built or what their purpose was. Such is the case with the Baghdad Battery, a device unearthed in Khujut Rabu, just outside of Baghdad, in 1936. It consisted of a small clay jar containing an iron rod suspended inside ofÃ‚Â a copper cylinder. The copper cylinder was soldered shut and sealed with asphalt. Wilhelm Konig, a German archaeologist working at the National Museum of Iraq, examined the device two years after its discovery and came to the conclusion that it was an ancient battery.

Indeed, when replicas were built they were able to generate small amounts of electricity. But if the device was a battery, it would pre-date other batteries by at least a thousand years. And what, exactly, would an ancient civilization have use batteries for? For many years, experts contended that the Baghdad Battery would have been used to electroplate thin layers of gold onto silver items. That theory has fallen out of favor due to lack of evidence.

In fact, many archaeologists now believe that the Baghdad Battery had no electrical purpose at all. The usability of the ancient batteries has been proven in various scientific and entertainment arenas, but so far all that can be said is that it was possible to produce electricity with these primitive cells. Whether they were ever used for that purpose – and what, exactly, they may have powered – may never be known. Like the Antikythera Mechanism and so many other ancient gadgets, its function may be forever lost to time. 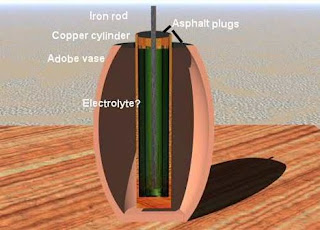