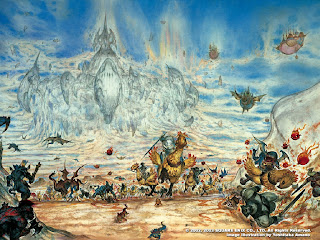 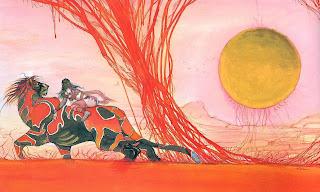 Yoshitaka Amano (天野 喜孝 (formerly 天野 嘉孝), Amano Yoshitaka?) (born July 28, 1952) is a Japanese artist. He began his career as an animator and has become known for his illustrations for Vampire Hunter D and for his character designs, image illustrations and title logo designs for the Final Fantasy video game series developed by Square Enix (formerly Square).[1] His influences include Western comic books, art nouveau, and Japanese woodblock prints. He has won awards for his work, including the 1999 Bram Stoker Award for his collaboration with Neil Gaiman, Sandman: The Dream Hunters.[2] In early 2010, he established Studio Devaloka, a film production company.

Amano was born in Shizuoka, Japan. As a young adolescent, he was fascinated with drawing. In 1967, he began working in the animation department of Tatsunoko Productions, where he was introduced to the early Japanese anime movement.[4][5] His first paid project was for the Speed Racer anime franchise. He was a character designer for anime shows such as Time Bokan, Gatchaman, Tekkaman, and Honey Bee.[6]

In the 1960s, Amano was exposed to Western art styles through comic books, which he claims among his artistic roots. He has cited Neal Adams as his favorite comic book artist, noting that he would often purchase used comics based on Adams's cover artwork, only to be disappointed that the interior artist was different.[7] Amano was also fascinated by the art styles of psychedelic art and pop art of the West, particularly the work of American Pop artist Peter Max.[8] In the 1970s, Amano studied the artworks of the late 19th century and early 20th century European movement of Art Nouveau, as well as the ancient Japanese hand woodblock printing work of Ukiyo-e.[8]

Amano remained at Tatsunoko Productions until 1982.

In the early 1980s, Amano concentrated on illustrations for science fiction and fantasy works. Combined with the influence of his prior experience in animation, this focus resulted in a personal style influenced by both modern surrealism and realism.[6]

In 1983, he illustrated the novel Demon City Shinjuku and the first in Hideyuki Kikuchi's Vampire Hunter D novel series.[6] He also worked as a character designer on the 1985 movie adaptation of Vampire Hunter D, which was one of the first anime movies to be released outside of Japan. In interviews, however, Amano has stated that he was not pleased with the final product of the movie.[citation needed] 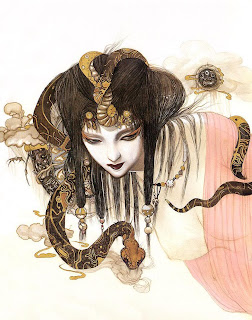 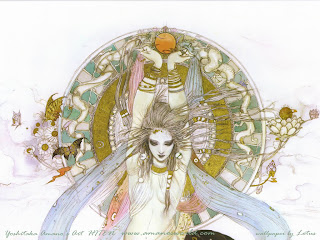 His illustrations begin to be published in collections such as Maten in 1984.

In 1987, Amano joined Square (now known as Square Enix) to work on a role-playing video game for the Nintendo Entertainment System: Final Fantasy. Amano produced conceptual design pieces for the game in both traditional and computer designed artwork.[10] At this time, he also worked for another video game company, Kure Software Koubou, producing box cover illustrations as well as some character designs. This work included designs for Kure's First Queen series.[11]

Following Final Fantasy VI in 1994, he stepped down as the main character, image, and graphic designer of the series. He continued to provide promotional and character artwork for the following games and to design their title logos.[12]

In 2006, Hironobu Sakaguchi, the former designer and creator of the Final Fantasy series, recruited Amano and composer Nobuo Uematsu to work on video games at Mistwalker.[1]

Amano's first exhibition, called "Hiten", was held in 1989 at Yurakucho Mullion in Tokyo, Japan.[13] In 1990, he began to work as an artist and set designer for stage theater. His first work for theater was Tamasaburo Bando's Nayotake.[8] He also held further exhibitions and became well-known for his printing works.[citation needed]

Beginning in 1995 with his work at the Biennale d'Orléans in France, he received increased recognition outside of Japan. Further international exhibitions followed, including the 1996 "Hero" at the Angel Orensanz Foundation and the 1997 workshop and exhibition "Think Like Amano".[14][15]

In 1998, Amano appeared as Hiroshi in the 1998 movie New Rose Hotel, loosely based on the William Gibson short story of the same name.

In 2000, Amano illustrated Neil Gaiman's Sandman: The Dream Hunters,[17] which won several awards and was nominated for a Hugo Award.[2] In 2001, Greg Rucka and Amano collaborated on another comic book tale, Elektra and Wolverine: The Redeemer.[18] His character designs were used in another Vampire Hunter D movie entitled Vampire Hunter D: Bloodlust. In 2006, the first volume of his HERO series was released by Boom! Studios.

In 2008, Amano created an illustrated adaptation of Wolfgang Amadeus Mozart's The Magic Flute, published by Radical Comics.[20] He also collaborated with Christopher "mink" MorrisonQuentin Tarantino's A Band Apart production company, providing illustrations for the novel Shinjuku and two other projects that have yet to be announced.[21] He was the character designer for the 2009 Jungle Emperor (Kimba the White Lion) TV special, directed by Gorō Taniguchi, to commemorate both the 50th anniversary of Fuji Television and the 80th anniversary of Osamu Tezuka's birth. 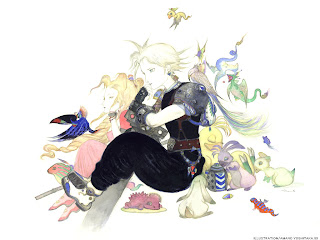 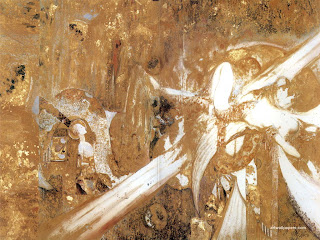 Great stuff. I'm inspired to do some drawing.

Right? this guys is rad. Mitsu told me about him.