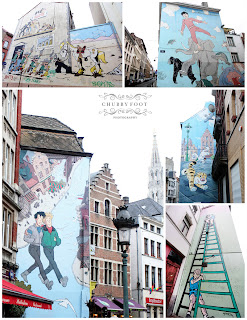 Brussels has a long tradition of murals. For the 2009 comic strips theme, the City of Brussels will again add to its comic strip tour, with two or three murals.
One of these murals will be devoted to Rabaté for the album ‘Les petits ruisseaux’ (small streams), which won the latest City of Brussels prize. This prize is awarded annually to an author and an original work that opens up new perspectives for comic strips (in terms of graphics, stories or story-telling technique). Artists from abroad are also invited to Brussels for this, to participate in the city’s beautification and to make it more attractive. 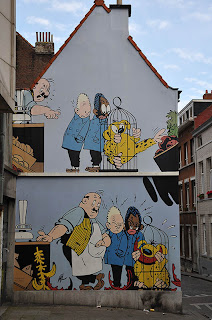 The City of Brussels started producing its own comic strip murals in 1993. They have been included in a tour that stretches across the city. Now very popular with tourists, the tour includes 31 walls in the central Pentagon area and four walls in Laeken. People following it can therefore take a nice stroll and discover Brussels in a different manner. This tour is today an integral part of the city’s heritage. It is something we would like to spotlight during the comic strips theme year, by ensuring the murals are known and recognised by everyone and by turning them into some of the most popular tourist attractions of our capital – the home of comic strips! Besides the murals, some streets in Brussels will be given two plaques, one of which is fictional. This will be an amusing reference to Belgian comic strips.
These ‘comic strip’ streets make up a second comic strip tour across the city, as the guiding thread for a nice walk.
Found Here:   http://brusselscomics.com/en/route_bd.cfm

The Brussels' Comic Book Route (or also The comic strip route in Brussels) is a path composed by several comic strip murals which deck the walls of several buildings throughout the inner city of Brussels as well as the neighborhoods of Laeken and Auderghem. The large comic strip murals show motifs of the main characters of the most famous and popular Belgian comic artist, for instance Lucky Luke, Tintin, Gaston, Marsupilami or Gil Jourdan. 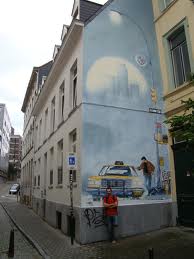 The project began in 1991 by initiative of the local authorities of the city of Brussels in collaboration with the Belgian Comic Strip Center. At its beginning, the project was just aimed to mask or embellish empty walls and gables of the buildings of the city, but it became also an opportunity to remember to its citizens and tourists that many well-known comic artists around the world were born or linked to the Belgium's capital, which at the same time claims to be also the capital of the comic strip.[1][2] 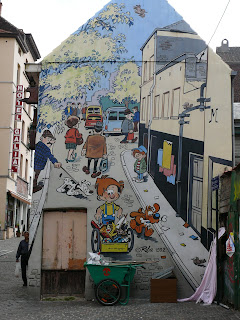 Today, the Brussels' Comic Book Route offers more than 50 mural paintings, most of them located inside the Pentagon (as the city center is often called due to its geometrical shape). Following its trail, the Comic Book Route is a good way to discover the capital and even penetrate some neighborhoods less crowded by tourists. The Brussels tourist association Pro Velo organizes a 2 hours bike tour starting at the Bicycle Riders House (Maison des cyclists).
Broussaille was the first comic book wall to be painted,[3] based on an original project of the Belgian comic book artist Frank Pé. With its surface of about 35 m2, the mural painting was inaugurated in July 1991 at the intersection between the central streets Marché au Charbon and Teinturiers. As most of the mural paintings, the Belgian association «Art Mural» was in charge for the execution of the fresco painting. 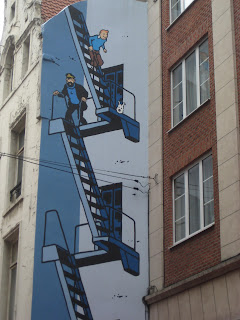 «Art Mural» is an association created by five artists in 1984, mainly aimed to realize mural painting in public areas. Since 1993 it has been devoted to the creation and realization of the fresco paintings belonging to the Brussels' Comic Book Route, with a rhythm of 2 to 3 works per year.[4] Georgios Oreopoulos and David Vandegeerde are the only two remaining founder members of the association who have been always involved in all the projects and mural paintings, helped with a large number of other artists who have collaborated and worked together with them.
Found Here:   http://en.wikipedia.org/wiki/Brussels'_Comic_Book_Route 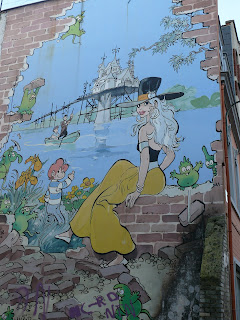 Brussels has undergone many architectural face-lifts and artistic design. None are quite like the cartoon characters that adorn the sides of buildings throughout Brussels. The brainstorm of someone with a bit of sense of humor and taste for the playful came up with the brilliant idea of transforming dull and grey buildings into eye-catching works of artistic expression. Local residences are being treated to the brightly colored displays across the city. Much to their delight the murals are said to being smiles to all who catch glimpse of them 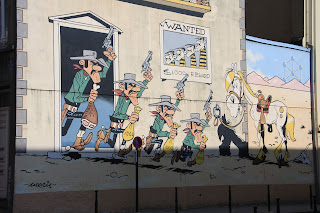 As you make your way through the city to streets such as 33 rue de la Buanderie you will find a cartoon mural featuring The Adventures of Asterix. This particular mural is located on the wall a public soccer and basketball playground. Artists Albert Uderzo who provided the text and René Goscinny who created the illustrations have together created a masterpiece of sorts. The Stockel Metro Station is another location featuring the cartoons character The Adventures of Tintin Mural. It is considered to be the most grand of all the murals in the city of Brussels.
This beautifully illustrated mural is featured on duel sides of 135 meters of underground station wall. Considered one of the most renowned as it was drawn by the late Hergé prior to his death in 1983. The actual completion of the mural was not until five year later. In 1988, Studio Hergé and Bob de Moor successfully completed the task in honor of the Stockel train station's grand opening. 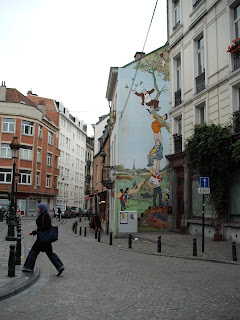 The Lucky Luke Comic Strip is one of the most beloved comic strips in Europe. As a local featured favorite in the city of Brussels, the mural stands at 180 meters of magnificent stature. Lucky Luke Comic Strip mural beheld as a most wondrous mural was painted by D. Vandegeerde and G. Oreopoulos in 1992. While the happiest mural in the city could be disputable, there is no mistaking the humor provided by the mural known as the "Happy Metro to You."
Created in 1974, artist Marc Mendelson hoped the mural would bring a more humorous side to the daily commute of onlookers making their way through the Park Metro Station. Stroll along the streets in Brussels and you can observe this fun and exciting way to liven up the dullness of old Brussels city walls. Five more vibrant and energizing murals have been commissioned for this year with another 10 expected by 2010. 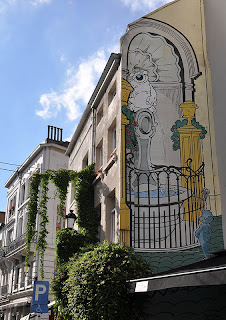 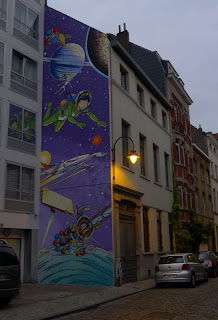 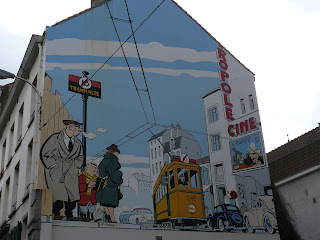