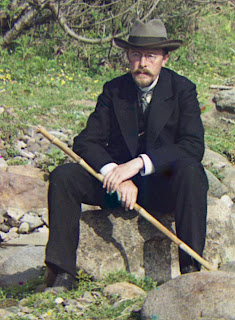 Early life
Prokudin-Gorsky was born in the ancestral estate of Funikova Gora, in what is now Kirzhachsky District, Vladimir Oblast. His parents were of the Russian nobility, and the family had a long military history.[2] They moved to Saint Petersburg, where Prokudin-Gorsky enrolled in Saint Petersburg State Institute of Technology to study chemistry under Dmitri Mendeleev. He also studied music and painting at the Imperial Academy of Arts.

Marriage and career in photography
In 1890, Prokudin-Gorsky married Anna Aleksandrovna Lavrova, and later the couple had two sons, Mikhail and Dmitri, and a daughter, Ekaterina.[3] Anna was the daughter of the Russian industrialist Aleksandr Stepanovich Lavrov, an active member in the Imperial Russian Technical Society (IRTS).[3] Prokudin-Gorsky subsequently became the director of the executive board of Lavrov's metal works near Saint Petersburg and remained so until the October Revolution. He also joined Russia's oldest photographic society, the photography section of the IRTS, presenting papers and lecturing on the science of photography.[4] In 1901, he established a photography studio and laboratory in Saint Petersburg. In 1902, he traveled to Berlin and spent six weeks studying color sensitization and three-color photography with photochemistry professor Adolf Miethe, the most advanced practitioner in Germany at that time.[5] Throughout the years, Prokudin-Gorsky's photographic work, publications and slide shows to other scientists and photographers in Russia, Germany and France earned him praise,[3] and in 1906 he was elected the president of the IRTS photography section and editor of Russia's main photography journal, the Fotograf-Liubitel.[4] 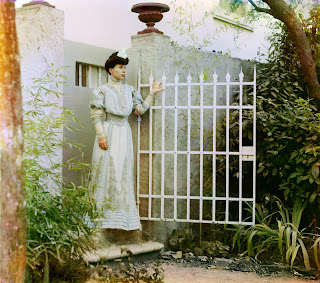 Perhaps Prokudin-Gorsky's best-known work during his lifetime was his color portrait of Leo Tolstoy,[6] which was reproduced in various publications, on postcards, and as larger prints for framing.[3][7] The fame from this photo and his earlier photos of Russia's nature and monuments earned him invitations to show his work to the Russian Grand Duke Michael Alexandrovich and Dowager Empress Maria Feodorovna in 1908, and to Tsar Nicholas II and his family in 1909.[4] The Tsar enjoyed the demonstration, and, with his blessing, Prokudin-Gorsky got the permission and funding to document Russia in color.[8] In the course of ten years, he was to make a collection of 10,000 photos.[9] Prokudin-Gorsky considered the project his life's work and continued his photographic journeys through Russia until after the October Revolution.[3] He was appointed to a new professorship under the new regime, but he left the country in August 1918.[10] He still pursued scientific work in color photography, published papers in English photography journals and, together with his colleague S. O. Maksimovich, obtained patents in Germany, England, France and Italy.[3]

Later life and death
In 1920, Prokudin-Gorsky remarried and had a daughter with his assistant Maria Fedorovna née Schedrimo. The family finally settled in Paris in 1922, reuniting with his first wife and children.[4] Prokudin-Gorsky set up a photo studio there together with his three adult children, naming it after his fourth child, Elka. In the 1930s, the elderly Prokudin-Gorsky continued with lectures showing his photographs of Russia to young Russians in France, but stopped commercial work and left the studio to his children, who named it Gorsky Frères. He died at Paris on September 27, 1944, and is buried in the Sainte-Geneviève-des-Bois Russian Cemetery.[3] 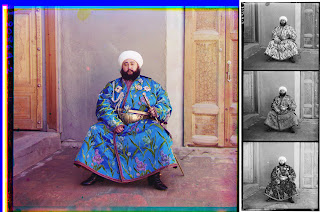 The method of color photography used by Prokudin-Gorsky was first suggested by James Clerk Maxwell in 1855 and demonstrated in 1861, but good results were not possible with the photographic materials available at that time. In imitation of the way a normal human eye senses color, the visible spectrum of colors was divided into three channels of information by capturing it in the form of three black-and-white photographs, one taken through a red filter, one through a green filter, and one through a blue filter. The resulting three photographs could either be projected through filters of the same colors and exactly superimposed on a screen, synthesizing the original range of color additively; viewed as an additive color image by one person at a time through an optical device known generically as a chromoscope or photochromoscope, which contained colored filters and transparent reflectors that visually combined the three into one full-color image; or used to make photographic or mechanical prints in the complementary colors cyan, magenta and yellow, which, when superimposed, reconstituted the color subtractively.[11] 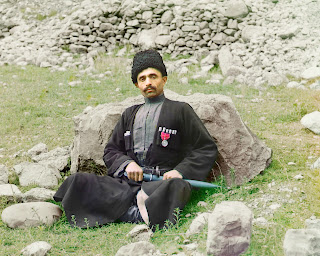 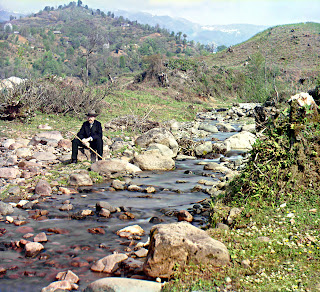 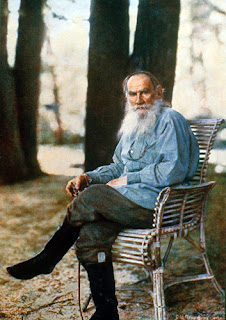 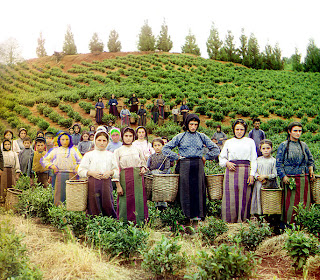