The Kensington Runestone is a 200-pound slab of greywacke covered in runes on its face and side, believed to have been created in modern times to claim that Scandinavian explorers reached the middle of North America in the 14th century. It was found in 1898 in the largely rural township of Solem, Douglas County, Minnesota, and named after the nearest settlement, Kensington. Almost all Runologists and experts in Scandinavian linguistics consider the runestone to be a hoax.[2][3] The runestone has been analyzed and dismissed repeatedly without local effect.[4][5][6][7][8] The community of Kensington is solidly behind the runestone, which has transcended its asserted cultural importance to the Scandinavian community and has "taken on a life of its own".[9][10]
Swedish American farmer Olof Ohman (he appears to have dropped the Swedish spelling Öhman when moving to the US) asserted that he found the stone late in 1898 while clearing his land of trees and stumps before plowing, having recently taken over an 80-acre (320,000 m2) parcel of public domain that had for years been left unallocated as "Internal Improvement Land".[11][12] The stone was said to be near the crest of a small knoll rising above the wetlands, lying face down and tangled in the root system of a stunted poplar tree, estimated to be from less than 10 to about 40 years old.[13] The artifact is about 30 × 16 × 6 inches (76 × 41 × 15 cm) in size and weighs about 200 pounds (90 kg). Ohman's ten-year-old son, Edward Ohman, noticed some markings[14] and the farmer later said he thought they had found an "Indian almanac."
Unfortunately for provenance purposes, the only witnesses cited for the finding were family members, although people who later saw the cut roots said that some were flattened, consistent with having held a stone. Also, there are many different versions describing when the stone was found (August or November, right after lunch or near the end of work for the evening), who discovered the stone (Olof Ohman and Edward Ohman; Olof Ohman, Edward Ohman and two workmen; Olof Ohman, Edward Ohman, and his neighbor Nils Flaten), when the stone was taken to the nearby town of Kensington, and who made the first transcriptions that were sent to a regional Scandinavian-language newspaper. Soon after it was found, the stone was displayed at a local bank. There is no evidence Ohman tried to make money from his find.[citation needed] 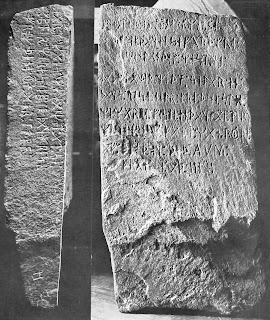 It can be claimed that at the period when Ohman discovered the stone, the journey of Leif Ericson to Vinland (North America) was being widely discussed and there was renewed interest in the Vikings throughout Scandinavia, stirred by the National Romanticism movement. Five years earlier Norway had participated in the World's Columbian Exposition by sending the Viking, a replica of the Gokstad ship to Chicago. There was also friction between Sweden and Norway (which ultimately led to Norway's independence from Sweden in 1905). Some Norwegians claimed the stone was a Swedish hoax and there were similar Swedish accusations because the stone references a joint expedition of Norwegians and Swedes at a time when they were both ruled by the same king, after the Union of Kalmar. It is thought to be more than coincidental that the stone was found among Scandinavian newcomers in Minnesota, still struggling for acceptance, and quite naturally proud of its Nordic heritage.[15]
An error-ridden[citation needed] copy of the inscription made its way to the University of Minnesota. Olaus J. Breda (1853–1916), Professor of Scandinavian Languages and Literature in the Scandinavian Department made a translation, declared the stone to be a forgery and published a discrediting article which appeared in Symra during 1910. Breda also forwarded copies of his translation to fellow linguists in Scandinavia. The Norwegian archeologist Oluf Rygh also concluded the stone was a fraud, as did several other noted linguists.[16]
The stone was then sent to Northwestern University in Evanston, Illinois. Scholars either dismissed it as a prank or felt unable to identify a sustainable historical context, and the stone was returned to Ohman, who is said to have placed it face down near the door of his granary as a "stepping stone" which he also used for straightening out nails. Years later, his son said this was an "untruth" and that they had it set up in an adjacent shed, but he appears to have been referring only to the way the stone was treated before it started to attract interest at the end of 1898.
In 1907 the stone was purchased, reportedly for ten dollars, by Hjalmar Holand, a former graduate student at the University of Wisconsin–Madison. Holand renewed public interest with an article[17] enthusiastically summarizing studies that were made by geologist Newton Horace Winchell (Minnesota Historical Society) and linguist George T. Flom (Philological Society of the University of Illinois), who both published opinions in 1910.[18]

According to Winchell, the tree under which the stone was allegedly found had been destroyed before 1910, but several nearby poplars that witnesses estimated as being about the same size were cut down, and by counting their rings it was determined they were indeed around 30–40 years old (NB: letters were written to members of a team which had excavated at the find site in 1899, and their estimates from memory, without any reference to tree rings, ranged as low as 10–12 years in the case of county schools superintendent Cleve Van Dyke).[19] The surrounding county had not been settled until 1858, and settlement was severely restricted for a time by the Dakota War of 1862 (although it was reported that the best land in the township adjacent to Solem, Holmes City, was already taken by 1867, by a mixture of Swedish, Norwegian and "Yankee" settlers.[20])
Winchell also concluded that the weathering of the stone indicated the inscription was roughly 500 years old. Meanwhile, Flom found a strong apparent divergence between the runes used in the Kensington inscription and those in use during the 14th century. Similarly, the language of the inscription was modern compared to the Nordic languages of the 14th century.[18] The Kensington Runestone is currently on display at the Runestone Museum in Alexandria, Minnesota.[21]

In 1577, cartographer Gerardus Mercator wrote a letter containing the only detailed description of the contents of a geographical text about the Arctic region of the Atlantic, possibly written over two centuries earlier by one Jacob Cnoyen. Cnoyen had learned that in 1364, eight men had returned to Norway from the Arctic islands, one of whom, a priest, provided the King of Norway with a great deal of geographical information.[22] Books by scholars such as Carl Christian Rafn early in the 19th century revealed hints of reality behind this tale. A priest named Ivar Bardarsson, who had previously been based in Greenland, did turn up in Norwegian records from 1364 onward and copies of his geographical description of Greenland still survive. Furthermore, in 1354, King Magnus Eriksson of Sweden and Norway had issued a letter appointing a law officer named Paul Knutsson as leader of an expedition to the colony of Greenland, to investigate reports that the population was turning away from Christian culture.[23] Another of the documents reprinted by the 19th century scholars was a scholarly attempt by Icelandic Bishop Gisli Oddsson, in 1637, to compile a history of the Arctic colonies. He dated the Greenlanders' fall away from Christianity to 1342, and claimed that they had turned instead to America. Supporters of a 14th century origin for the Kensington runestone argue that Knutson may therefore have travelled beyond Greenland to North America, in search of renegade Greenlanders, most of his expedition being killed in Minnesota and leaving just the eight voyagers to return to Norway.[24] 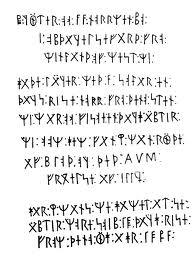 However, there is no evidence that the Knutson expedition ever set sail (the government of Norway went through considerable turmoil in 1355) and the information from Cnoyen as relayed by Mercator states specifically that the eight men who came to Norway in 1364 were not survivors of a recent expedition, but descended from the colonists who had settled the distant lands, generations earlier.[22] Also, those early 19th century books, which aroused a great deal of interest among Scandinavian Americans would have been available to a late 19th century hoaxer.
Hjalmar Holand had proposed that interbreeding with Norse survivors might explain the "blond" Indians among the Mandan on the Upper Missouri River,[25] but in a multidisciplinary study of the stone, anthropologist Alice Beck Kehoe dismissed, as "tangential" to the Runestone issue, this and other historical references suggesting pre-Columbian contacts with 'outsiders', such as the Hochunk (Winnebago) story about an ancestral hero "Red Horn" and his encounter with "red-haired giants".[26]

The Kensington Rune Stone is a medieval artifact recently proven to be authentic. Read the story here of how, for over 100 years, repeated claims of hoax have been debunked forcing a major rewrite of American history.

In 1898, a Minnesota farmer unearthed this carved stone while felling a tree. It unleashed a storm of controversy that has still not abated today. Branded a hoax, the family of Olof Ohman endured scorn, ridicule and lies. The stone itself was “borrowed” by an unscrupulous researcher and never returned.

Over 100 years later, the stone rests in a small museum. While it had many adherents through the years, today new technology and newly discovered documents are tilting the scales sharply away from the possibility that the rune stone is the product of Olof’s hoax. These pages provide an overview of where we are with Kensington Rune Stone research. The information here is factual and correct but we do not claim to be unbiased - we believe the rune stone is genuine.