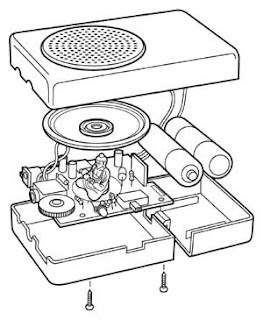 I stumbled upon this nice little gadget over at FM3 Buddha Machine. Here’s a short review from the website:

The Buddha Machine is a little plastic box that plays music.

Specifically, FM3 constructed nine drones, varying from two seconds to 42 seconds, which repeat endlessly in the listener’s ear until the “track” is switched to the next drone (or the two AA batteries run out).

The machine has its own built-in speaker, in case one would like to fill a room with the drones, but there is also a headphone jack for more personal meditative experiences. There’s a switch on the side that allows for traversal of the tracks, and a DC jack (though an adapter is not included) for those who would like the Buddha Machine experience be truly endless.

In a way, it’s like the cheapest pre-loaded iPod you’ll ever be able to buy.

But like any self-respecting Buddhist, it is the emptiness that fascinates me. In this particular case, it is the empty space inside the gadget that grabs my interest.

Judging from the exploded view of the Buddha Machine above, there is enough space in there to squeeze in a few pieces of orgonite and a tiny double terminated quartz crystal. If you’ve seen the insides of a Don Croft Terminator Zapper, you’d know what I mean. When activated, the sound vibrations from the built-in speaker will stimulate the orgonite into releasing orgone. The quartz crystal can be programmed to direct the orgone toward the fulfillment of a specific task.

The Buddha Machine retails for $23 plus shipping stateside. With just a little modding, you can turn this baby into your very own personal psychotronic tool.