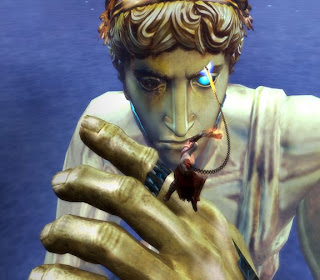 When you jam your Athena's Blades into the Colossus' blue eyeball, you'll be launched into a body of water. Dash through the barrier and climb the ladder up ahead. There is a lever that you need to pull and the first save point in the game. Use your new grappling ability to get across the room and lift up the door to continue to the next room where a couple of enemies will be waiting for you. The Colossus will try to stomp you once you go up the small ladder, so press Circle repeatedly to throw him off of you. Stab your Blades into the wall to scale it. Get ready for round two with the boss.

Stay as far away from the Colossus as you can. This time around, the Colossus means business and you need to dodge as many of his attacks as you can by pressing Right and Left on the analog stick at the precise moment. When he lifts both of his fists up into the air, he is about to try to bash you, so be ready to jump out of the way. Use Kratos' combo attacks by pressing and holding R1 and then pressing Triangle, Square, or Circle. When the Colossus has taken enough damage, he will use the platform opposite of you for balance and a circle will appear over his hand. Grapple across to the other side and press circle to grab onto him with your Athena's Blades. You will have to repeat this process of weakening him, grabbing his fist, and entering a series of buttons twice. When the huge enemy takes his balance on the platform to the left, the buttons you must press are Circle, Circle, Square, Square. When he rests on the platform to the right, press Triangle, Triangle, X, X. After you have successfully entered both of these button chains, press L1 and R1 repeatedly to prevent the giant from squashing you.

After this sequence, keep pressing onward, block the arrows that some enemies fire at you, and save your game up ahead. After hacking up a few more enemies, there will be a bird statue up ahead. Move it over the circular button on the floor to open the gate. Press and hold R1 and then press and hold X to gain enough strength to push the statue hard with your foot. While standing on the button, roll underneath the gate quickly before it closes. Move the statue on top of the second button and go through the next gate. Open the chests you come across and pull the level to ride up the elevator. After you encounter the Colossus' peeping eye at the top of the elevator, the demo will end.