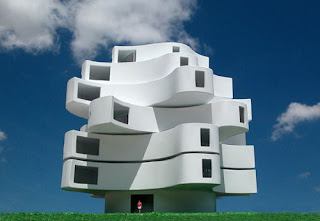 Last Sunday, The Discovery Channel aired a program exploring the multi-purpose creations of artist and designer Michael Jantzen. In particular, I found his Wind Shaped Pavilion to be incredibly fascinating. Made of lightweight fabric, each of the six “Jenga” like layers of the structure move in accordance with the wind around a central support frame. As a result, the building’s shape constantly adjusts, while simultaneously generating electricity for illumination at night. Interestingly, “The shape of the structure starts out as a relatively symmetrical form. Then the wind begins to alter the shape randomly, with only a slim chance of ever returning to its original symmetry”, says Jantzen.

“If the structure’s scale and the materials were to change, it could become an apartment complex, and or some other commercial building,” Jantzen says of his own creation. “In this case, the occupants could take control and rotate the segments to adjust to changing desires or needs, such as weather conditions, best views, etc.”

In a time where experimentation, sustainability and innovation are synonymous with competitive advantage, perhaps government agencies or trendy organizations on the forefront of a “brave new world”, so to speak, will adopt architecture of this nature as a way of exuding creativity and confidence.

Jantzen’s also created the Internet Observatory, a support grid frame that represents the matrix of the Internet. In this conceptual design, “The curved space which is contained by the grid represents a place where the flow of Internet information is accessed by an individual. The person sits at the center of the curved space in a specifically designed interactive workstation that rotates up out of the glass floor in order to allow the occupant to face any direction.”

The movie Contact comes to mind, in which Jodie Foster’s character travels for hours through the depths of space via a worm hole. She finds out that on earth, only seconds have passed by. I wonder if surfing the net will one day provide a similar experience?

If that wasn’t enough, check out Jantzen’s Sky-Cloud Pavilion, a structure that can “interactively change its surface by weaving flexible materials, such as fabric, through its support frame.” The result: a beautiful configuration that is capable of changing from an open frame, to an orange enclosure, to a sky image, and back to an open frame again.