Two cards from the Illuminati Card Game created in 1995 ... several years before 9/11

In 1990, role-playing inventor, Steve Jackson, was planning his newest game, which he would ultimately call the Illuminati -- New World Order Game, or "INWO" for short.

As you can see from the picture above, one card shows the first Twin Towers of the World Trade Center being hit by "Terrorists" at the distance it actually occured during 9/11 and another one shows the Pentagon in fire at is center, the rest being intact. As we know a plane allegedly flew into a section of the Pentagon and nearly burned that section completely. However, the rest of the Pentagon was undamaged to the point where its functions continued unimpeded.

Of course this could be a coïncidence. But strangely his company has been visited by the secret service on March 1 1990 as reported on their site sjgames vs. the Secret Service: "A large amount of equipment was seized, including four computers, two laser printers, some loose hard disks and a great deal of assorted hardware. One of the computers was the one running the Illuminati BBS".

My hypothesis are these:

1°) It's pure coïncidence as said already

2°) Steve Jackson met insiders like Brzezinski, the right hand of Rockefeller or Aaron Russo who revealed that Nick Rockefeller had announced him some big event and that after that event the US would invade Irak - nevertheless it's must be somebody else than Russo since Nick Rockfeller never told him precisely it would be the WTC or the Pentagon !

3°) Steve Jackson is himself a Secret Agent who has fabricated a covert to create an apparent opposition to the system by controlling an organization called "Electronic Frontier Foundation" which fights for privacy today.

Second hypothesis may be the most plausible but I don't discard the third one when I know that there is a very strong habit from the secret service to fabricate and/or control fake opposition (this is the basics of Hegelian Dialectic used for propaganda) see the case of Gloria Steinem, the iconic figure of Feminist Party who had been a CIA agent and whose magazine has been funded by them (if you want to know why Nick Rockfeller told Aaron Russo the two fundamental reasons).

There is no way I can choose between the three and you ? Maybe you have other hypothesis (Steve Jackson met a psychic for example ... like me :) once) 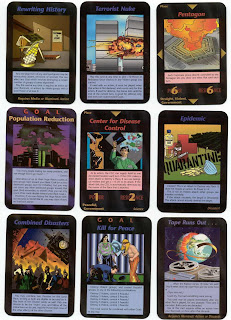 In 1990 an Illuminati Card Game was invented by Steven Jackson. The 'game' he had created ruffled quite a few feathers as he was promptly visited by the Secret Service who tried to shut him down and prevent the cards from being released. You can read Jacksons own account of the raid Here.

Apparrently Jackson must have either had some type of insider knowledge or the foresight of Nostrodumus because the game he created has turned out to be very close to the real thing. Several of the cards depict events in modern history that either have, or soon will occurr, including the attacks on the world trade center and pentagon.

Oil spill card of Illuminati Card Game proves that - The entire oil spill incident was planned to bring down America.

* That one tower was going to be struck first; this picture accurately depicts the moments between the first tower strike and the second.

* The card accurately depicts that the place of impact is some distance from the top of the twin towers. The plane hit in this approximate area of the first tower. How in the world could Steve Jackson know this fact? 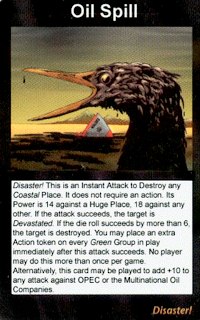 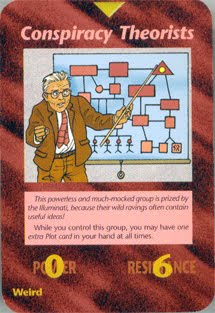 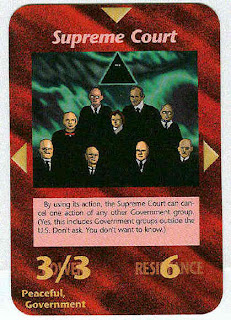 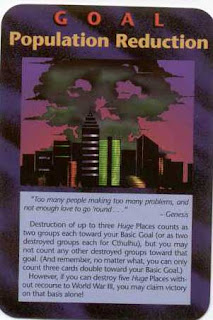