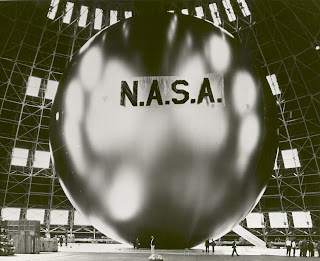 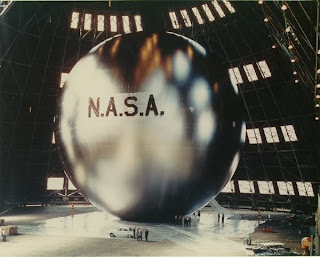 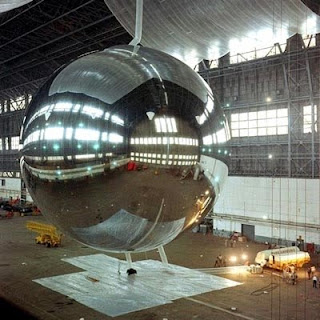 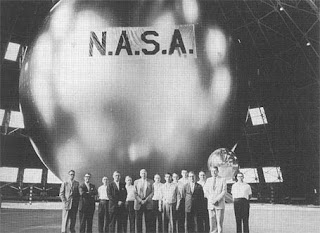 From about 1956 until 1964, US aeronautics engineers and rocket scientists at the Langley Research Center developed a series of spherical satellite balloons called, awesomely enough, satelloons. Dubbed Project Echo, the 100-foot diameter aluminumized balloons were one of the inaugural projects for NASA, which was established in 1958.

The Echo balloon was perhaps the most beautiful object ever to be put into space. The big and brilliant sphere had a 31,416-square foot surface of Mylar plastic covered smoothly with a mere 4 pounds of vapor-deposited aluminum. All told, counting 30 pounds of inflating chemicals and two 11-ounce, 3/8-inch-thick radio tracking beacons (packed with 70 solar cells and 5 storage batteries), the sphere weighed only 132 pounds.

For those enamored with its aesthetics, folding the beautiful balloon into its small container for packing into the nose cone of a Thor-Delta rocket was somewhat like folding a large Rembrandt canvas into a tiny square and taking it home from an art sale in one's wallet.

The satelloons were made from a then-new duPont plastic film called Mylar, which was micro-coated with aluminum using a then-new vacuum vaporizing technique developed by Reynolds Aluminum Co. Originally conceived as research tools to collect data on the density of the upper atmosphere, the reflective satelloons also served as proofs of concept for space-based commmunications systems.

The original research proposal put forward by a Langley engineer named William J. O'Sullivan called for a 20-inch balloon, which was increased to 30 inches. These "Sub Satellites" were followed by a 12-foot diameter Beacon satelloon, the size of which was determined, not by any scientific requirements, but by the ceiling height in the Langley model fabrication room.


The Echo satellites were NASA's first passive communications satellite experiment. Each spacecraft was designed as a metallized balloon satellite acting as a passive reflector of microwave signals. Communication signals were bounced off of it from one point on Earth to another.