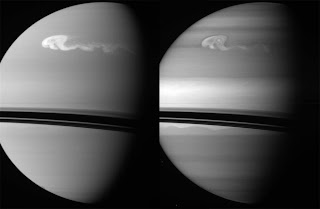 An enormous storm has erupted in Saturn’s northern hemisphere.

Amateurs first sighted the storm earlier this month, but the Cassini spacecraft moved into a good position on Dec. 24 to photograph it from about 1.1 million miles away. Earth received the raw and unprocessed shots today.

The storm has a huge central funnel and a long tail that sweeps around Saturn’s northern hemisphere for tens of thousands of miles. A shot in blue light (left) reveals the extent of the tail, but infrared light (right) shows detail of the storm’s amorphous core. The photos were taken exactly a month after Cassini recovered from a solar-flare-induced error that temporarily silenced the spacecraft from Nov. 2 through Nov. 24.

Saturn’s weather is complex like Jupiter’s, but it’s often difficult to see such storms beneath Saturn’s hazy outer atmosphere, wrote Carolyn Porco, a planetary scientist and leader of Cassini’s imaging team, on Twitter.