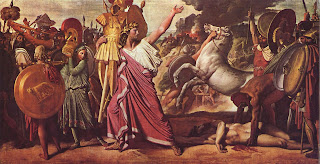 Jean Ingres’ “Romulus, Conqueror of Acron” of 1812. Ingres was born in Montauban in 1780 and at the age of sixteen he went to Paris to study under David. He won the Grand Prix in 1801. He went to Rome in 1807 having secured a following in the art world. He continued to mature and gather a greater gathering until his death in 1867. Romulus, Conqueror of Acron, was created as a large painting for the salon of Napoleon I. It recalls the earliest and mythological history of Rome and reflects the Napoleonic obsession with all things Roman and Classical. The original painting is in the Ecole des Beaux-Arts in Paris.

A few important commissions came to him; the French governor of Rome asked him to paint Virgil reading the Aeneid (1812) for his residence, and to paint two colossal works—Romulus's victory over Acron (1812) and The Dream of Ossian (1813)—for Monte Cavallo, a former Papal residence undergoing renovation to become Napoleon's Roman palace. These paintings epitomized, both in subject and scale, the type of painting with which Ingres was determined to make his reputation, but, as Philip Conisbee has pointed out, "for all the high ideals that had been drummed into Ingres at the academies in Toulouse, Paris, and Rome, such commissions were exceptions to the rule, for in reality there was little demand for history paintings in the grand manner, even in the city of Raphael and Michelangelo."[18] Art collectors preferred "light-hearted mythologies, recognizable scenes of everyday life, landscapes, still lifes, or likenesses of men and women of their own class. This preference persisted throughout the nineteenth century, as academically oriented artists waited and hoped for the patronage of state or church to satisfy their more elevated ambitions."[19]