In Dogon thought, male and females are thought to be born with both sexual components. The foreskin is considered female, while the clitoris is considered to be male.[9] Rites of circumcision thus allow each sex to assume its proper 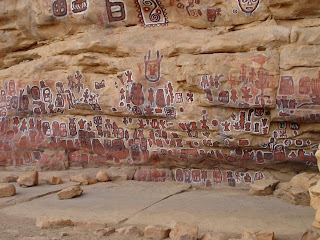 physical identity. Boys are circumcised in age groups of three years, counting for example all boys between 9 and 12 years old. This marks the end of their youth, and they are now initiated. The blacksmith performs the circumcision. Afterwards, they stay for a few days in a hut separated from the rest of the village people, until the wound has healed. The circumcision is a reason for celebration and the initiated boys go around and receive presents. They make music on a special instrument that is made of a rod of wood and calabashes that makes the sound of a rattle. The village of Songho has a circumcision cave ornamented with red and white rock paintings of animals and plants. Nearby is a cave where music instruments are stored. The newly circumcised men must walk around naked for a month after the procedure so that their achievement in age can be admired by the citizens of the tribe. This practice has been passed down for generations and is always followed, even during winter.

They are one of several African ethnic groups which practice female genital cutting. According to Sékou Ogobara Dolo, at least in the Sangha region, the milder form is practiced. This means that only the clitoral hood is removed, which is similar to male circumcision. The majority of the Dogon women practice a Class 2 circumcision, meaning that both the clitoris and the labia minora are removed. Girls are circumcised around the age of 7 or 8 years, sometimes younger. Circumcision for both male and female is seen as necessary for the individual to gain gender. Before circumcision they are seen as 'neuter'.

Dogon social and religious organizations are closely interlinked and out of this arose principal cults, which accounts for the richness and diversity of Dogon culture and art. The clans are subdivided onto lineages, overseen by the patriarch, guardian of the clan’s 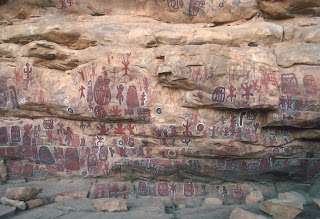 ancestral shrine and officiant at the totemic animal cult. Beside this hierarchical system of consanguinity, male and female associations are entrusted with the initiations that take place by age group, corresponding to groups of newly circumcised or excised boys or girls. The Dogon believe these operations remove the female element from males and vice versa. Circumcision thus creates a wholly male or female person prepared to assume an adult role. The members of an age group owe one another assistance until the day they die. Initiation of boys begins after their circumcision, with the teaching of the myths annotated by drawings and paintings. The young boys will learn the place of humans in nature, society, and the universe. In the Dogon pantheon Amma appears as the original creator of all the forces of the universe and of his descendant Lebe, the god of plant rebirth. The first Dogon primordial ancestors, called Nommo, were bisexual water gods. They were created in heaven by the creator god Amma and descended from heaven to earth in an ark. The Nommo founded the eight Dogon lineages and introduced weaving, smithing, and agriculture to their human descendants. 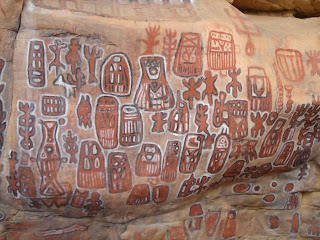