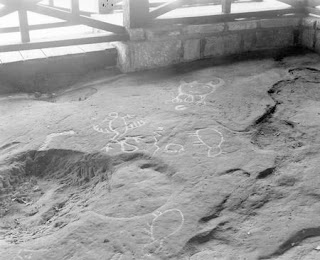 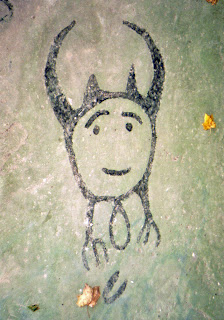 Leo Petroglyph is located in Jackson County near Leo, Ohio. It is actually a series of petroglyphs, or rock carvings, ancient Indians chiseled into an outcropping of sandstone in southeastern Ohio.

The precise age of these carvings is unknown. Based on the symbolism and the amount of weathering of the generally soft sandstone, they probably are less than one thousand years old and so likely are the work of the Late Prehistoric period Fort Ancient culture, or the early Historic Indians.

There are between thirty and forty different designs carved on the rock, including human figures, birds, a snake, a fish, human footprints, and bear paw prints.

The most arresting image on the petroglyph panel is a human head with horns or antlers and small bird's feet. The image may represent a shaman, or medicine man, transformed into a supernatural being.

David Zeisberger, the Moravian missionary, described symbols painted on trees by Ohio's Delaware Indians as "hieroglyphics" that are "understood by the Indians who know how to read their meaning." Unfortunately, we do know the full meaning of the inscriptions at Leo Petroglyph.

Leo Petroglyph is listed on the National Register of Historic Places.

The Leo Petroglyph is a sandstone petroglyph containing 37 images of humans and animals as well as footprints of each. The petroglyph is located near the small village of Leo, Ohio (in Jackson County, Ohio) and is thought to have been created by the Fort Ancient peoples (possibly AD 1000-1650). The area in which the sandstone petroglyph was found is on the edge of an unglaciated Mississippian sandstone cliff 20–65 feet high. To this day, the meanings of the drawings are unknown. On November 10, 1970, it was added to the National Register of Historic Places. The site is maintained by the Ohio Historical Society. 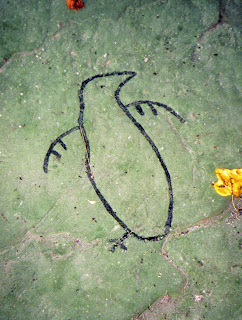 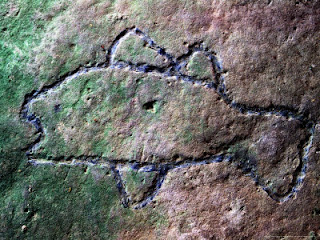