Gematria is a system of recognizing a correspondence between the ten sefirot, or fires of God, and the twenty two letters in the Hebrew alphabet. This system is elaborated in many mystical Jewish writings such as the Zohar.

One example of gematria is that there are twenty-two solid figures that are composed of regular polygons. There are five Platonic solids, four Kepler-Poinsot solids, and thirteen Archimedean solids. Since there are twenty-two letters in the Hebrew alphabet, a correspondence can be inferred between these two disparate categories. The art of gematria is knowing which solid is associated with which letter.

Another example is that of Hebrew numerals. Although there are twenty-two letters, there are twenty-seven numerals necessary to express each number up to 999 (one through nine, ten through ninety, one hundred through nine hundred). The mystical Hebrew numeric system notes that the missing final five letters of the numeral system match exactly with the five 'sofit (word-final) alternate forms of the Hebrew letters.Another use is that words which have the same numerical value, share the same qualities, and reveal still other aspects of the Divine.

Shemhamforash. This word denotes the secret names of God that are 72 in number. When considering the actual number of demons in the Goetia, one will discover that they are also 72 in number. The Goetic demons are shadows of God and Creation. They are the spirits of the Qliphoth inhabiting the anti-worlds of the Sitra Ahra. The number 72 contains the keys to Qabalistic, Qliphotic, and Goetic mysteries. The Shemhamforash and the names of God and his 72 angels can be found in the fourteenth chapter of the book of Exodus 19:21. In Hebrew, each verse is written with 72 letters. When placing the verses above each other, 72 columns with three letters each appear. When the holy suffixes EL, AL or YAH are added, God’s 72 secret names can be found.

The number 72 is anything but random. In the center of the Qabalistic perception of the universe and Creation we can find the number 6. The number 6 represents the sun and the center of Creation, corresponding to the Sephirah Tiphareth, or it’s dark counterpart, Thagirion. The hexagram, which is the symbol of Creation, and the number 6 combine the triangles of the above and the below. The orbit of the heavens around the world of man consists of the twelve signs of the Zodiac (6×2). These are called sun signs. When multiplying the sun signs with the number of the sun (12×6) the product is 72.

Shemhamforash and the 72 names are connected with the time and space of Creation. The 12 months are governed by the sun signs and 6 spirits rule each month (12×6). Each of the 24 hours is ruled by 3 spirits (24×3=72) representing the waxing, stable, and waning characters. The number 72 is also connected with the four elements, the name of God and the four cardinal points of the compass. Eighteen spirits (6×4) represent each direction and element. God’s names and the angels in the Shemhamphorash represent the structure of the universe that upholds time and space and all laws of nature. The Goetic demons are the shadow sides of these angels and the forces that can open up gates in time and space.

There is an affinity between Goetic magic and Gothic magic; Gothic magic originates from Odin, who is also called Got, and his lore consists of the principles of the universe symbolizes by the 24 runes. The number of the runes multiple by three, which is also a pivotal number in Nordic mythology, gives us the number 72. Each rune can, accordingly, be linked to three Goetic demons. Futhermore, the number 72 becomes the sacred Gothic number 9 through the addition of 7 and 2, as is common procedure in numerology.

The 36 illness-causing demons of the Testament of Solomon are also connected to the Zodiac and the numberology around the Shemhamforash. The twelve star signs of the Zodiac control different body parts that the 36 demons can attack. The 36 angels that are conjured to banish these illnesses are also presented in the Testament of Solomon. Three illness-causing demons belong to each sign, and thus we arrive at the number 36. 36 multiplied by two gives us, again, the number of the Shemhamforash.

The number of the beast, 666, also contains the number of the Shemhamforash: 72. This is reached by multiplying the sexes and dividing the result by their amount, which is 3. The key appears in the following way: (6x6x6)/3.

The Shemhamphorash is connected with the name of God, IHVH, called the Tetragrammaton and considered so holy that it is not pronounced. The pronunciation is unknow, but combined with the vowels of God’s title: Adonai, (meaning the lord), we find the name Jehovah. The four holy letters of the Tetragrammaton correspond to the number four in all its forms: the four worlds, the four elements, the four beings seen by Ezekiel at the throne of God, etc. The name of the dark counterpart of God, cursed and kept secret by the Qabalists, is the name of God backwards: Chavajoth. The shadow of God belongs to the Qliphoth and represents the demonic correspondences of the number four: the four worlds of the Qliphoth, the four rivers of the Inferno, the demons governing the four directions and the demons who rule the elements. God’s dark antithesis rules over the 72 Goetic demons and all infernal legions.

God’s 72 names found in the Shemhamphorash consist of 72 letters that are extracted from the name Ayn Sop (Ain Sof) and the names of the ten Sephiroth, as well as the word Kdos, ‘holy’, repeated three times and the sentence konhsmimwars, ‘Creator of heave and earth’ (Genesis 14:19). The name describes the Creation, its structure and a triple tribute to the Creator. A shorter version of the Shemhamforash is based on 42 letters container on the names of the ten Sephioth. An even shorter version is built on 12 letters containing the names of three highest Sephiroth. The name in it’s entirety is Ktrhhmhtbwnh. A darker form of the Shemhamforash opens the gate to the shadow side. Its name consists of 12 letters, n which Daath replaces Kether. The name in it’s entirety is Hhmhtbwnhd’at.

According to the Qabalah, the two principles of the universe are form and energy, described as vessels and divine light. During Creation, some vessels broke and 288 sparks of divine light fell in the Abyss. These sparks are fallen angels that exist in the Abyss as Luciferian light. By seeking these sparks in the Abyss, man can reach the knowledge of becoming a God. These sparks are the light in the darkness, and are occasionally compared to a glowing dragon in the center of the underworld, or to Lucifer standing in the center of the Inferno. The 288 sparks are Goetic forces; four demonic rulers rule the Goetic demons. 288 divided by 4 is 72. 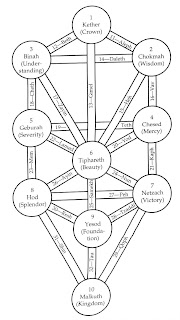 The Tree of Life; the Ten Sephiroths, their resemblance with parallel universes and the implications of the Sephiroths in our own particular psychology. Overview of other ways of studying the Kabbalah.

This is for hand-picked advanced practitioners in meditation, especially those who are about to become members of our Institution. An individual interview is required prior to the delivery of the course. Jewish Transcendental Meditation; Magical Images; experiencing directly and the direct confirmation of the existence of each of the Ten Sephiroths; applications; more.

"The Sephiroth are meant to be completely self-realized within..." -- S.A.W.

Membership is required. The Awakening Phase: experiencing each Sephiroth much more frequently. The Resurrection Phase: Dissolving links with the "shadow of the Tree" (Qliphos), and becoming permanently awakened in each Sephirah. The Ascension Phase: Incarnating the Sephirotical Crown (Kether, Chockmah and Binah). The work of the Compassionate Boddhisattwa. Direct application in daily living. More.

This is extremely interesting to me, thank you for providing this information, particularly the former half. I'm wondering, although this involves the "darker magicks" for those who believe in and/or fear & loathe such things, so I don't know if you'll appreciate this from a simply knowledge-based point of view, but do you know anything of the Tree of Knowledge of Good & Evil, aka Tree of Qliphoth? I'm looking for a diagram that is identical to the one you've provided of the Tree of Life here, with the spheres & connections labeled, but the only one I've come upon has been copyrighted and is impossible to read, and not available for purchase in the United States. Do you know where I could find such information?

Hi Tess,
Definitely appreciate the info from the knowledge based point of view. You can use these images if you like depending on what you're going to be using them for. If the images are going to be published in a book I think you would definitely have to gain permission. My suggest would be to recreate the diagram yourself in illustrator or photoshop. That way you can personalize the image to better suit your needs. The actual information about gematria / kabbalah is free. Hope that helps and thanks for the comment.