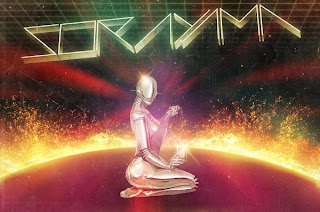 Sorayama graduated in 1968 at the age of 21, and gained an appointment in an advertising agency. He became a freelance illustrator in 1972.[4] In 1978 he drew his first robot. He resides in Tokyo.[5]

Sorayama's work Sexy Robot, published by Genko-sha in 1983,[6] made his organic robotic forms famous around the world. For the work, he used ideas from pin-up art, which in the book then appear as chrome-plated gynoids in suggestive poses. His next book, Pin-up (Graphic-sha, 1984), continue in the same line. A number of his other works similarly revolve around figures in suggestive poses, including highly realistic depictions in latex and leather.

From 1985 to 2010 has been a very busy period for Sorayama who is releasing his new book Master Works in late spring of 2010. There were some important issues of cloudy title and copyright matters that may be understood from reading news reports, PACER court records and this fully referenced article [http://knol.google.com/k/art-sorayama-v-tamara-bane-gallery-and-robert-bane# ] which details the art fraud case of Sorayama V. Tamara Bane Gallery and Robert S. Bane. For more specific information, one may contact the official [website http://www.sorayama.net] 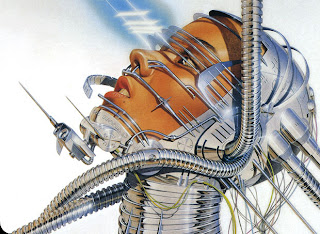 Heavy Metal was created by American Publisher Leonard Mogel, who upon a trip to Paris had come across “Metal Hurlant”(Howling Metal) a French science-fantasy magazine that had debuted in 1974 and featured contribution’s from illutrators such as Jean Giraud AKA Moebius, Phillippe Druillet, Philippe Caza and Italian Erotica specialist Milo Manara. Inspired, Mogel set about licensing and translating this material for an American version and thus in April 1977 Heavy Metal was born, a franchise that’s spawned two feature length animated Movies and still runs to this day – check the official site: http://www.metaltv.com/ (warning Saucy over 18 type content)

So back to the subject of Hajime Sorayama and all thing’s bright, shiny and VERY 80’s – Hafidz from http://puteraaladin.blogspot.com/ has kindly contacted me to reccomend these lovingly crafted techinicolor Sorayama tribute Wallpaper’s:

One final note I’d like to add – I think perhaps the most enduring element of Heavy Metal is the collapsing chrome Logo-type – Perfection! 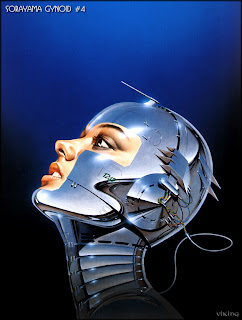 A tentatively posed model is airbrushed into another part of the “Gynoid” Series, by Hajime Sorayama. The Gynoids are very much the same concept harvested by H.R.Giger with his BioMechanoids; that is to say they’re both a fusion of machine and the female form, but the similarity pretty much stops there.

Sorayama’s work is sweetness and light, he uses the body hugging chrome prosthetic to re-enforce softcore/pin-up titillation, machine enhanced but very much human. Giger’s approach is the reverse, sinister machine like humanoids – alien (literally) – the example shown is one his earlier works, a pre-airbrush piece from around 1970.

Another example of a “Gynoid” by Hajime Sorayama, super sexy airbushing pretty much unsurpassed IMHO – I really like the subtle glows and Sheen

The term “Gynoids” was created by the female British SF writer, Gwyneth Jones, and developed by another British writer, Richard Calder. The word is a combination of “droid” (greek “in the image of”) and “gyn” (greek “woman”). See more on Sorayama here http://hajimesorayama.com/

Part of Sorayama’s “Gynoid” series of airbrush Illustrations, which involve the female form combined with chromed machinery, mainly in suggestive poses, that tend to veer to wards the explicit – suffice to say Sorayama’s has often been featured in Penthouse Magazine. Read more about Sorayama at Wiki here.

Thanks to Kiel Bryant again for the scan of the original image. 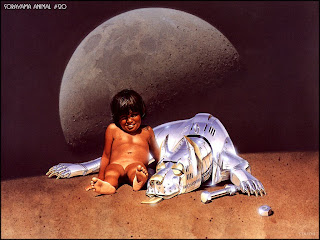 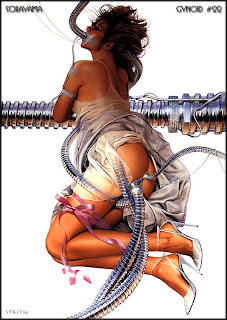 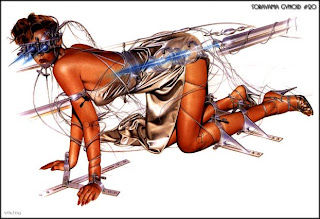 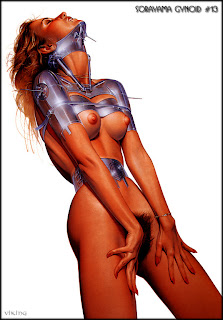 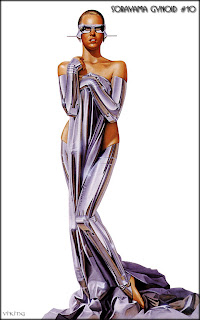 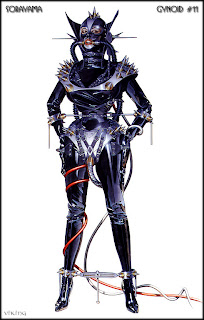 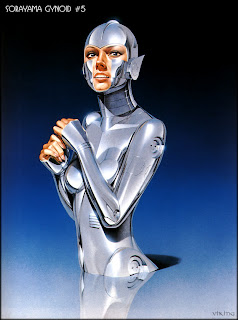 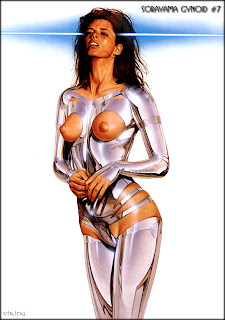 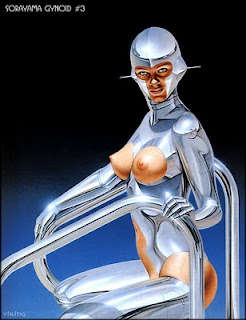 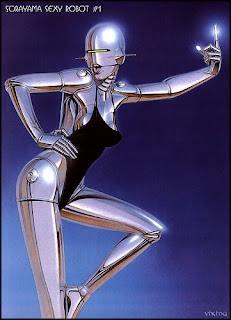 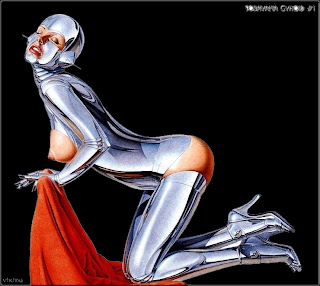 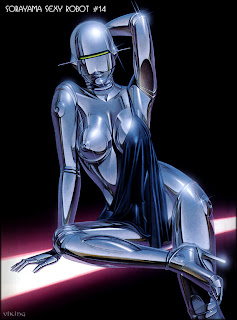 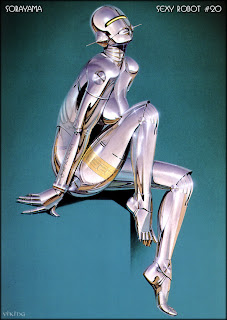 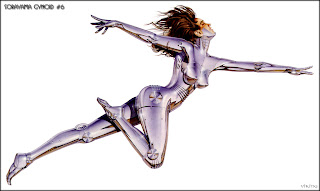 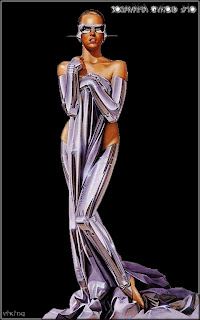 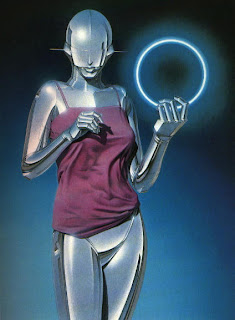 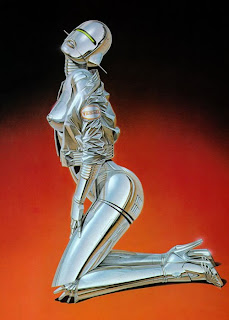 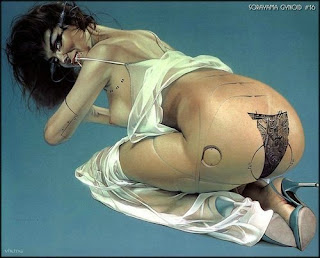 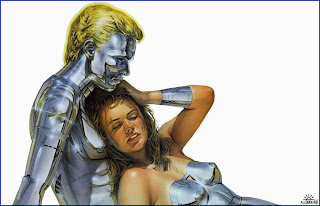 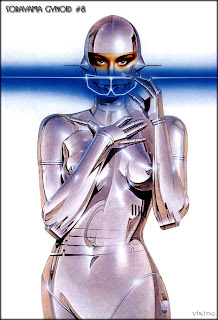 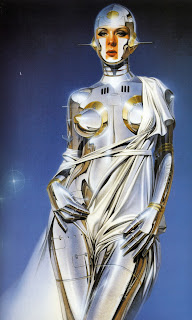 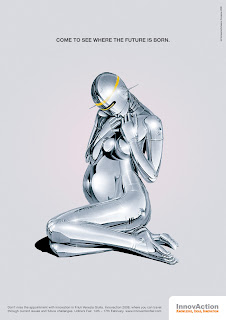 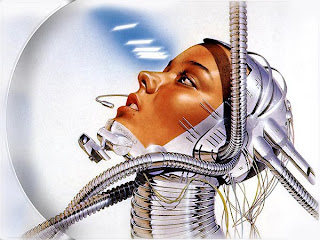 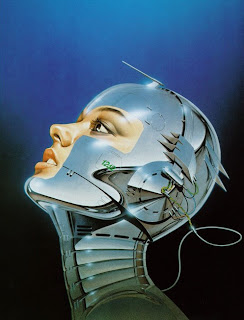 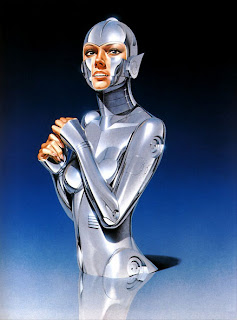 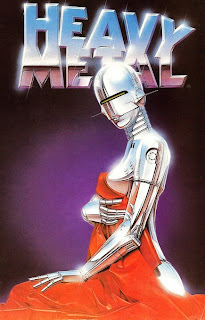 Hey Sorayama,i really love your work and i'm an airbrushing/artist and been airbrushing for 20+year's and need your advice on getting my work off the ground,please help me,thanx and have an blessed day,looking for your advice,thanx.

This is a very useful site which gives benefits. I found this is great for me… Thanks for it. I hope it will help to more people.
http://www.yooarticles.net/article/careers-in-graphic-designs

Glad you all liked it. He's an amazing illustrator...

Really you blog have very interesting and very valuable information about the Sexy Robots.
Sexy Robots