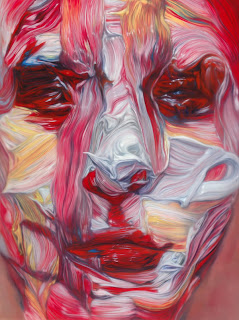 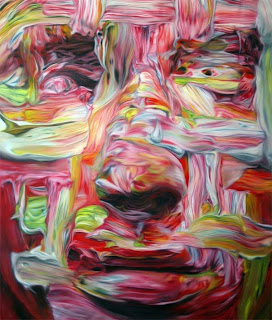 Can there be such a thing as painting that swallows its own tail? I was wondering about this after visiting the studio of Stephan Balleux. I had seen paintings that could not ignore their own existence. Whatever else they represented, they always made explicit play of the action of painting: the gesture preserved in paint. There were two nearly finished portraits in the studio. Here and there the palette slipped from its black-and-white into colour; a dark purple that crept into the top of the picture, like the imminent purple of the falling night; or faintly beige tinted legs standing out against a white dress. It was as though you were viewing the first intimations of colour in a world that hitherto existed purely in black and white. The portraits were from a family album; they had something of the atmosphere of old-fashioned photographs in which children, awed by the photographer, pose obediently on a bench or table and peer earnestly at the lens. In this case they were not photographs but large paintings with the children as their subjects. 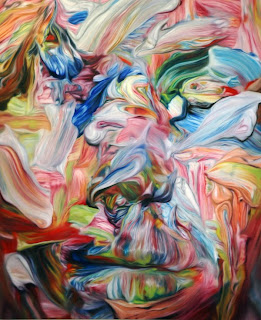 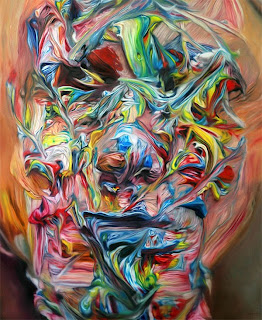 There was something uneasy about them. Perhaps it was their serious gaze, or perhaps it was an effect of the colour that was sneaking into the image, like the presage of a new era. Or was my reaction due to the strange, twisted objects that appeared, like that in the little boy’s hand or on the table next to the girl? They were mere knick-knacks, like little sculptures made from congealed, twisted paint. There it was: art biting its own tail, shaking itself by the hand, allowing the intrusion of painterly matter into an otherwise photographic space. The work of Stephan Balleux dramatizes the activity of painting. You see an obvious stroke of applied paint; or at least you think you do. Whether you are looking at a portrait, an interior or a relatively abstract play of forms, that explicit brushstroke always turns up; sometimes lavishly, over the whole canvas, and sometimes in a mere detail, a knick-knack, a casually hand-fashioned object left on a table. There is always a gesture that reminds you: this is painting. Why that emphasis? It’s nothing new in itself, this visible impasto which shows how a painting came about. Consider the rough, tortured touch of the expressionists or the loose écriture of the impressionists. Consider Cézanne, and how he could make the light vibrate in a landscape by the genius of his tremulous painter’s hand. These are all products of a painterly touch that claims independence from the represented subject. Look and you will find copious examples in modern art. But something else is involved here. Balleux differs in that his brushstroke is an illusion. It is not what you think you see. Instead of a spontaneous stroke of paint, you are looking at a picture of a brushstroke, an imitation of a painterly handwriting. It is a faux brushstroke, a brushstroke that is play-acting itself. This aside, Stephan Balleux also paints figurative images and sometimes tackles classical motifs. This saves his work from mere conceptual narcissism. 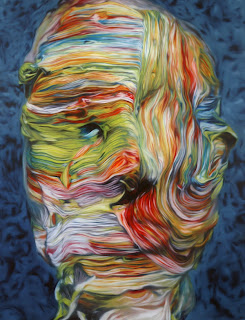 A rose, a group of people, a portrait, a skull, another skull, an interior: they are images that have something to say, which are beautiful and menacing. They are sweet yet at the same time repellent, sometimes symbolic and sometimes suggestive. The image is in some cases no more than a colourful form which possesses the whole canvas with its dramatic energy. Layer by layer, it is a painting process that advances patiently, even if it sometimes looks bold and immediate. There is a skull in the studio, which the artist casts as a model, of which he takes a photograph, which he then uses as the basis of a painting. Layer by layer the painting takes shape, first the drawing, then the paint, then more paint, until everything looks fluent and effortless. Balleux employs illusionist devices. That is just what you would expect of the ‘clever’ kind of painter, one who paints so dextrously that you would scarcely realize that the canvas had been painted if he did not continually reminded you of the fact. Balleux not only studies the old masters and their painterly technique, but investigates what photography and video have to offer him, and how classic sculpture and three-dimensional digital representations relate to one another. And he expresses all this in paint and in the illusion of paint. Perhaps he is the kind of painter who is a bit of a philanderer, one who is forever straying off with some other medium, hungry for experience and new expressive opportunities. But in the end he comes back to his true muse, the art of painting. He cannot help it because he loves her. In Pompeii, I saw casts of people trapped in the eruption of Mount Vesuvius in 79 AD. The figures had an intimacy that was almost embarrassing. It was as though I were witness to something not meant for an outsider’s eyes; people, their outward form immortalized at the moment of their extinction. At the same time, it occurred to me that these were casts many a sculptor might envy, so compellingly did they combine life and death in a single object. I had to think back to Pompeii when I saw how Stephan Balleux uses paint to make not only paintings, but also sculptures and reliefs, of human torsos, heads and skulls. They resemble people congealed in paint, like individuals overwhelmed by some inescapable torrent of fluid colour. The sweeping motion is still visible yet they are now motionless. 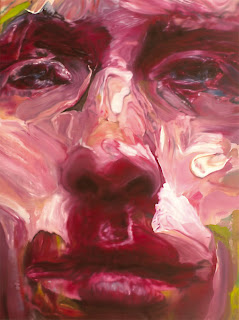 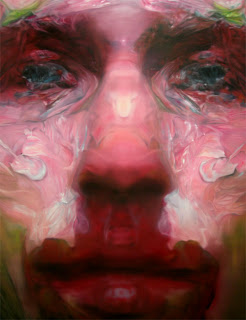 Do not speak of Gerhard Richter if the painter is in a bad mood. Anyone who paints today with some awareness of how our vision has become partly photographic cannot get around Richter. You may first think of other painters when seeking parallels for Balleux’s twisted beings and morbidly proliferating shapes, but under the surface it is Richter who counts, and counts like no other. He is the begetter of a generation when it comes to the art of tightrope walking between photography and painting. So must the father die before the son can prosper, before he can find his own way? Maybe the painter toys with the notion of artistic patricide. He presumably shares the master’s interest in photographic effects such as selective focus and blur, or must at least acknowledge a debt to him. The painterly style is one that gains its vigour by embracing the power of the photographic gaze instead of repudiating it. But then something happens with Balleux, that tail-swallowing act, that backward glance over the shoulder, that making a drama out of the act of painting; for example when he imitates the painterly brush-stroke with photographic precision. What serves Balleux well is moreover that he is no stranger to the weird and wonderful. That makes the road he has chosen an unusual one. He has a keen eye for alienation and that is what he sees and portrays in his fellow man. It emerges in the way he exaggerates the faces, dead or alive, in the way he makes them melt, makes them volcanic. Man is a monster, even if he wears a tailored suit. There is another factor in the content of this work. It is the concentration with which the artist makes it, his dedication one might say. Perhaps it is this painter’s greatest talent. When I look at his work, besides looking at a subject and at a self-conscious painted surface, I see patience, precision, control and professional mastery. It is these qualities that bridle the tortuous, volcanic imagination underlying the images. The resulting tension is a pleasing one. The artist once described his painting as a virus. Willy-nilly it spreads one work to the next. Every image he touches is infected, becomes paint-stricken. That is the respect in which his work swallows its own tail; it forms a closed circle. However videomanic or photo-addicted the image may be, it always veers back to painting. 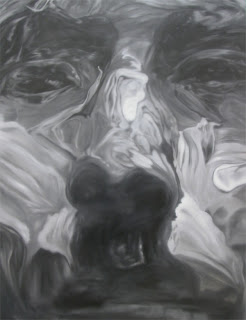 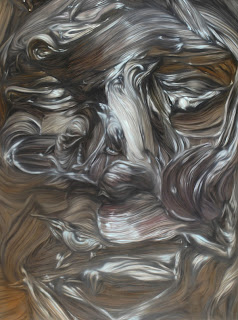 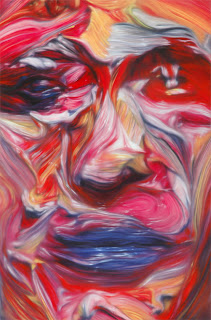 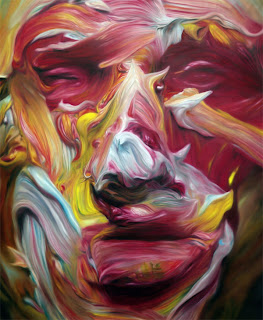 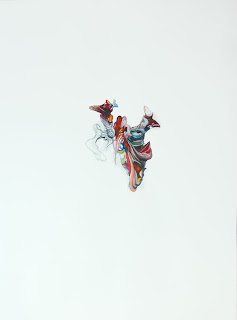 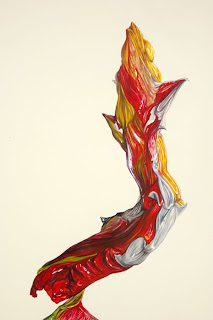 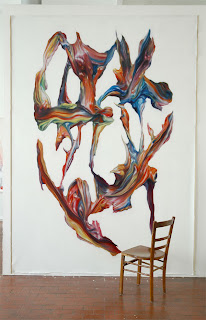 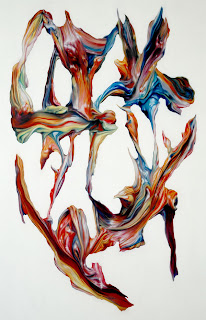 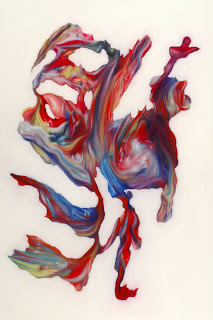 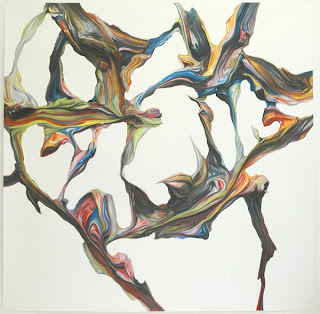 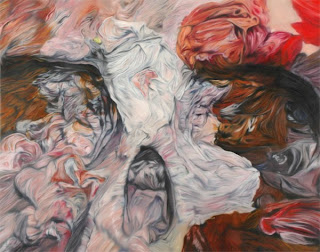 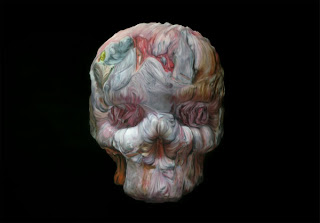 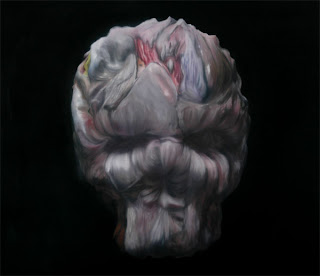 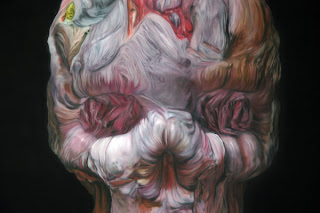