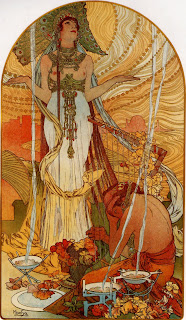 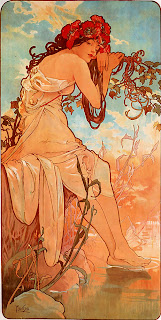 Alphonse Maria Mucha,[1] first name from the Czech Alfons[2] (24 July 1860 – 14 July 1939), was a Czech Art Nouveau painter and decorative artist,[3] best known for his distinct style and his images of women. He produced many paintings, illustrations, advertisements, and designs.

Alphonse Maria Mucha was born in the town of Ivančice, Moravia (today's region of the Czech Republic). Although his singing abilities allowed him to continue his education through high school in the Moravian capital of Brünn (today Brno), drawing had been his first love since childhood. He worked at decorative painting jobs in Moravia, mostly painting theatrical scenery. In 1879 he moved to Vienna to work for a leading Viennese theatrical design company, while informally furthering his artistic education. When a fire destroyed his employer's business in 1881 he returned to Moravia, to do freelance decorative and portrait painting. Count Karl KhuenMikulov hired Mucha to decorate Hrušovany Emmahof Castle with murals, and was impressed enough that he agreed to sponsor Mucha's formal training at the Munich Academy of Fine Arts. of

Mucha moved to Paris in 1887, and continued his studies at Académie Julian and Académie Colarossi. In addition to his studies, he worked at producing magazine and advertising illustrations. Around Christmas 1894, Mucha happened to drop into a print shop where there was a sudden and unexpected need for a new advertising poster for a play starring Sarah Bernhardt, the most famous actress in Paris, at the Théâtre de la Renaissance on the Boulevard Saint-Martin. Mucha volunteered to produce a lithographed poster within two weeks, and on 1 January 1895, the advertisement for the play Gismonda by Victorien Sardou appeared on the streets of the city. It was an overnight sensation and announced the new artistic style and its creator to the citizens of Paris.[4] Bernhardt was so satisfied with the success of this first poster that she entered into a 6 year contract with Mucha.

Mucha produced a flurry of paintings, posters, advertisements, and book illustrations, as well as designs for jewellery, carpets, wallpaper, and theatre sets in what was initially called the Mucha Style but became known as Art Nouveau (French for 'new art'). Mucha's works frequently featured beautiful, strong young women in flowing vaguely Neoclassical looking robes, often surrounded by lush flowers which sometimes formed haloes behind the women's heads. In contrast with contemporary poster makers he used pale pastel colors.[5] The 1900 Universal Exhibition in Paris spread the "Mucha style" internationally, of which Mucha said "I think [the Exposition Universelle] made some contribution toward bringing aesthetic values into arts and crafts."[6] He decorated the Bosnia and Herzegovina Pavilion and collaborated in the Austrian Pavilion. His Art Nouveau style was often imitated. The Art Nouveau style however, was one that Mucha attempted to distance himself from throughout his life; he always insisted that rather than adhering to any fashionable stylistic form, his paintings came purely from within and Czech art.[4] He declared that art existed only to communicate a spiritual message, and nothing more; hence his frustration at the fame he gained through commercial art, when he most wanted to concentrate on more lofty projects that would ennoble art and his birthplace. 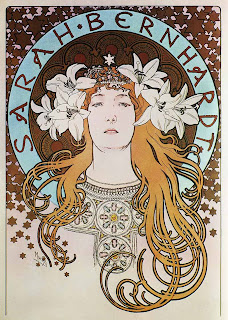 Mucha married Maruška (Marie/Maria) Chytilová on June 10, 1906, in Prague. The couple visited the U.S. from 1906 to 1910, during which time their daughter, Jaroslava, was born in New York City. They also had a son, Jiri, (born March 12, 1915 in Prague; died April 5, 1991 in Prague) who later became a well known journalist, writer, screenwriter, author of autobiographical novels and studies of the works of his father. In the U.S. Alphonse expected to earn money to fund his nationalistic projects to demonstrate to Czechs that he had not "sold out".[4] He was supported by millionaire Charles R. Crane, who used his fortune to help promote revolutions and, after meeting Thomas Masaryk, Slavic nationalism. Alphonse and his family returned to the Czech lands and settled in Prague, where he decorated the Theater of Fine Arts, contributed his time and talent to create the murals in the Mayor's Office at the Municipal House, and other landmarks around the city. When Czechoslovakia won its independence after World War I, Mucha designed the new postage stamps, banknotes, and other government documents for the new state.

Mucha considered Le Pater his printed masterpiece, and referred to it in the January 5, 1900 issue of The Sun Newspaper (New York) as the thing he had "put [his] soul into". Printed on December 20, 1899, Le Pater was Mucha's occult examination of the themes of The Lord's Prayer and only 510 copies were produced.

Mucha spent many years working on what he considered his life's fine art masterpiece, The Slav Epic (Slovanská epopej), a series of twenty huge paintings depicting the history of the Czech and the Slavic people in general, bestowed to the city of Prague in 1928. He had dreamt of completing a series such as this, a celebration of Slavic history, since he was young. Since 1963 the series has been on display in the chateau in Moravský Krumlov the South Moravian RegionCzech Republic. in the 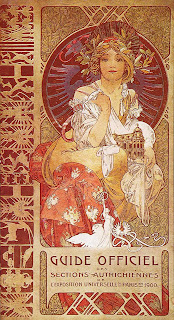 The rising tide of fascism in the late 1930s led to Mucha's works, as well as his Slavic nationalism, being denounced in the press as 'reactionary'. When German troops marched into Czechoslovakia in the spring of 1939, Mucha was among the first persons to be arrested by the Gestapo. During the course of his interrogation, the aging artist fell ill with pneumonia. Though eventually released, he never recovered from the strain of this event, or from seeing his homeland invaded and overcome. He died in Prague on July 14, 1939, of a lung infection, and was interred there in the Vyšehrad cemetery.[3]

At the time of his death, Mucha's style was considered outdated. His son, author Jiří Mucha, devoted much of his life to writing about him and bringing attention to his art. In his own country, the new authorities were not interested in Mucha. His Slav Epic was rolled and stored for twenty-five years before being shown in Moravsky Krumlov and only recently has a Mucha museum appeared in Prague, run by his grandson, John Mucha.[4]

Mucha's work has continued to experience periodic revivals of interest for illustrators and artists. Interest in Mucha's distinctive style experienced a strong revival in the 1960s (with a general interest in Art Nouveau)[8] and is particularly evident in the psychedelic posters of Hapshash and the Coloured Coat, the collective name for two British artists, Michael English and Nigel Waymouth, who designed posters for groups such as Pink Floyd and The Incredible String Band.

It is a strongly acknowledged influence for Stuckist painter Paul Harvey whose subjects have included Madonna and whose work was used to promote The Stuckists Punk Victorian show at the Walker Art Gallery during the 2004 Liverpool Biennial.[7] 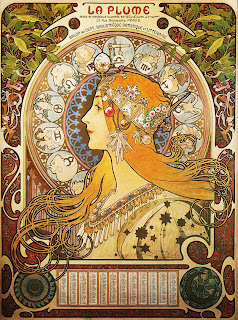 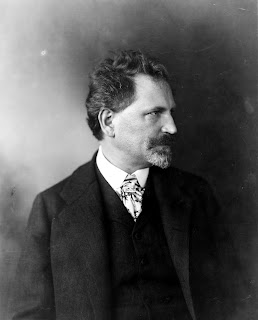 One of Mucha's paintings, Quo Vadis or alternately Petronius and Eunice, was the subject of a legal dispute in 1986. The judgment handed down by Richard Posner describes parts of Mucha's life and work biographically.[10]

Among his many other accomplishments, Mucha was also the restorer of Czech Freemasonry.[11]

Alfons Mucha was a very influential but seldom mentioned figure in the history of art. He is more than anyone else responsible for the "art nouveau" style that developed around the turn of the century and applied his considerable talents to a wide variety of pursuits ranging from painting and sculpture to poster, magazine, and calendar illustration, and product and architectural design. It is probably as much because he did things other than paintings to be hung in museums that many of the leading artistic institutions have ignored his work for most of this century, but the fact that he opposed the cubist revolution and made recognizable and beautiful images meant that the critics of the 20th century would ignore his work. Those are the very things of course that make him worthy to appear here. 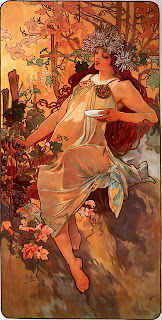 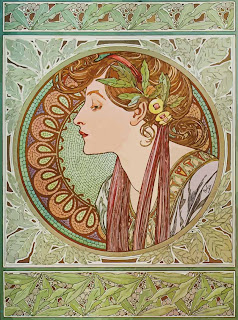 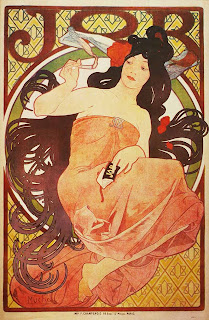 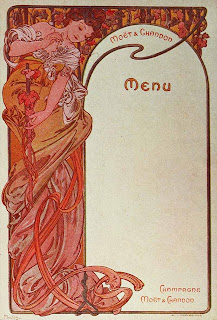 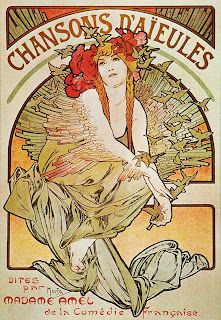 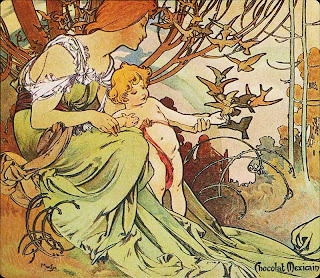 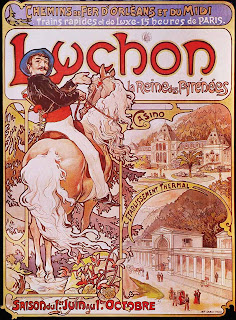 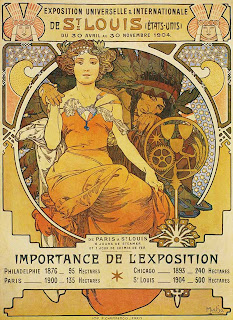 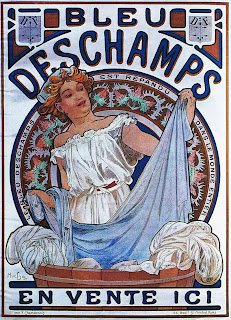 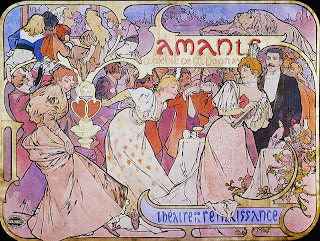 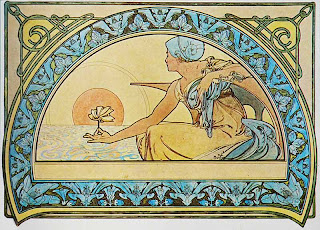 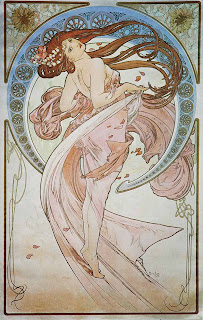 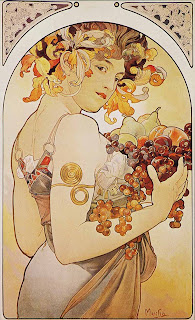 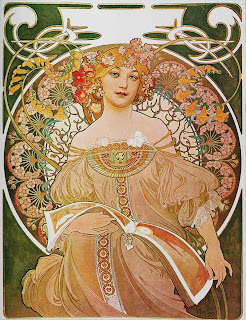 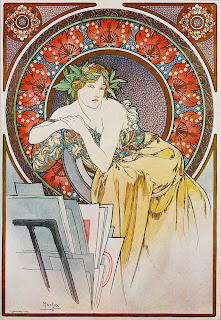 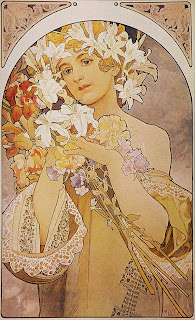 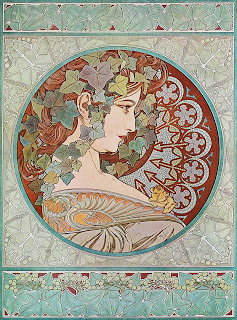