Fool’s Cap Map of the World 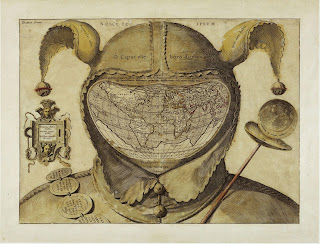 This startling and disturbing image is one of the enigmas of cartographic history. The artist, date and place of publication are all unknown, and one can only guess at its purpose. The geography of the map strongly resembles that of the world maps of Ortelius published in the 1580s, giving a tentative date of c. 1590. This is the earliest known use of the world map in a visual joke. Its central visual metaphor is the universality of human folly and various mottoes around the map reinforce that theme. The panel of the left says: “Democritus laughed at it [i.e. the world], Heraclitus wept over it, Epichtonius Cosmopolites portrayed it.” Although Epichtonius Cosmopolites appears to be the author’s or artist’s name, it translates roughly as “Everyman,” leaving the mapmaker’s true identity hidden.

A strong legacy of the theme of the Fool exists in literature and popular art from the fourteenth to seventeenth centuries. The Fool was licensed to break rules, speak painful truths and mock power and pretension, and the grotesque shape he bore was a kind of living punishment. This frame of reference would have been quite familiar to the audience of this engraving in the 1590s. And people would have recognized in this map a radical visual interpretation of the Fool’s role: it is now the whole world that takes on the Fool’s costume, thus forcing the viewer to confront the possibility that the entire created order is irrational, alien and threatening.

Adapted from the book The Image of the World: 20 Centuries of World Maps by Peter Whitfield (Pomegranate Artbooks, 1995)

This rather sinister image is one of the biggest mysteries in the history of western cartography. Most often referred to simply as the Fool’s Cap Map of the World, it is unknown why, when, where and by whom it was made.

The only thing that can be said about it with some certainty is that it dates from ca. 1580-1590. But sources even differ as to the type of projection used, some referring to it as ptolemaic (i.e. equidistant conic), others claiming it owes more to the techniques of Mercator and/or Ortelius (and being an enthusiast rather than a specialist, I’m not one to call this). 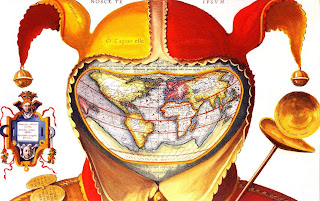 The map shows the world ‘dressed up’ in the traditional garb of a court jester: the double-peaked, bell-tipped cap (1) and the jester’s staff (2). The face is hidden (or replaced) by the map, giving the whole image an ominous, threatening quality that feels anachronistically modern.

The archetype of the Fool, presented here in his incarnation as the court jester, is a first indicator of the map’s deeper meaning. In previous ages, the Fool was a court figure allowed to mock majesty and to speak truth to power. These were rare and useful correctives to the corrupting absolutism of the monarchies of the day. But criticism of this sort was only possible if it was de-fanged by the grotesque appearance of the Fool - preferably a hunchbacked, slightly loopy-headed dwarf, i.e. someone not to be taken too seriously.

All of this would have been common and current knowledge to the people viewing this map, in the late 16th century. The uncomfortable truth told by this map is that the world is a sombre, irrational and dangerous place, and that life on it is nasty, brutish and short. The world is, quite literally, a foolish place.

This is underlined by the mottoes of biblical and classical origin, dotted across the map. The

legend in the left panel reads: “Democritus of Abdera laughed at [the world], Heraclitus of Ephesus wept over it, Epichtonius Cosmopolites portrayed it” (3). Over the cap is the Latin version of the Greek dictum, “Know thyself" (4). Across the cap’s brow, the inscription translates as “O head, worthy of a dose of hellebore” (5).

The Latin quote just above the map is from Pliny the Elder (6): “For in the whole universe the earth is nothing els e and this is the substance of our glory, this is its habitation, here it is that we fill positions of power and covet wealth, and throw mankind into an uproar, and launch wars, even civil ones.”

The reason for so much trouble and strife is explained in the quote below the map, from Ecclesiastes: “The number of fools is infinite” (7). Another quote from that most depressing of Bible books, on the jester’s staff to the right, intones: “Vanity of vanities, all is vanity” (8). Inscribed on the badges adorning the shoulder belt are a few sayings in line with this cheerful message: “Oh, the worries of the world; oh, how much triviality is there in the world” (9), “Everyone is without sense” (10), and “All things are vanity: every man living” (11).

For some researchers, the sum of these messages, as well as their presentation in a cartographic setting, point to a little-known Christian sect called the Family of Love. This clandestine group is said to have numbered the Flemish cartographer Ortelius in its ranks. If this map is anything to go by, the Family of Love must have espoused a rather harsh and pessimistic view of the world, and of humanity’s place in it.

But much remains conjecture, as indicated also by the last piece of this cartographic puzzle - the name written in its top left corner: Orontius Fineus. This name (the Latinised version of the French name Oronce Finé) is associated with a map dated 1531, purportedly showing an ice-free, river-rich Antarctica. Why would the name of this cartographer crop up on a map made decades later? Could he have been the mapmaker (12)? Or is he the one being made fun of?

Many thanks to J.B. Post for alerting me to this map. Many versions to be found online, this high-resolution image found here at Coin des cartes anciennes.

(1) the donkey’s ears referring to the supposed stupidity of the ass. Inscribed on them is the quote Auriculas asini quis non habet, meaning “Who doesn't have donkey's ears?" This witticism is ascribed to Lucius Annaeus Cornutus, a Roman stoic philosopher from the 1st century AD.

(2) a parody of the royal staff, a symbol of authority.

(4) Nosce te ipsum, in Greek: gnothi seauton. According to Pausanias, an inscription on Apollinic temple at Delphi.

(5) O caput elleboro dignum. Hellebore is a family of mostly poisonous plants, some of which have been used medicinally since Antiquity. It is reputed to induce madness.