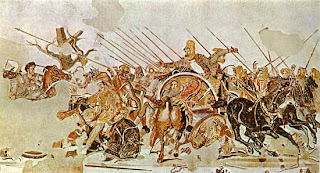 Wear patterns on one of the most celebrated mosaics of antiquity have allowed researchers to reconstruct exactly how ancient Romans viewed the artwork.

Found during the 1831 excavations in the lava-buried town of Pompeii, the Alexander mosaic (now on display at the National Archaeological Museum in Naples) is the most famous example of an early tessellated mosaic.

Measuring 19 feet by 10 feet, the piece was made around 100 B.C. out of roughly 4 million tesserae (small mosaic tiles).

The artwork once decorated the floor of a room in the House of the Faun, one of Pompeii's grandest residences.

The tiny tesserae, applied following the "opus vermiculatum" technique (basically set in worm-like rows), depicted a dramatic scene from a battle between Alexander the Great and the Persian king Darius III.

"Although there is some disagreement as to exactly which battle the mosaic depicts [either the Battle of Issus in 333 B.C. or the Battle of Gaugamela in 331 B.C.], we know many things about this mosaic. For example, it is uniformly agreed [that the mosaic is] a copy of a famous Hellenistic painting executed sometime around 300 B.C.," Martin Beckmann, of the University of Western Ontario, Canada, told Discovery News. 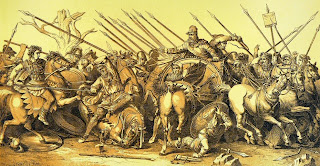 "What is less know is the mosaic's role as a floor surface in an Italian house. In this role, it has the potential to provide evidence of the tastes, interests and desires of the wealthy Romans during the late Republic," Beckmann said.

In his study, presented today in Anaheim, Calif., at the annual meeting of the Archaeological Institute of America, Beckman looked at some large, entirely destroyed areas of the mosaic.

These areas were filled in ancient times with mortar and have been in the same condition since they were originally discovered.

Beckmann identified four mains pattern of wear: a large, crescent-shaped area around the portrait of Alexander, two patches in the upper portion of the mosaic and two other patches in the lower portion.

"The patches basically show us the mosaic through the Romans eyes, and tell us what interested the ancient viewer. Although Darius is the most prominent figure in the mosaic, the Romans were much more interested in Alexander," he said.

"They were also apparently fascinated by the plight of two Persians crushed beneath Darius' chariot, especially one who is shown with his face turned from the viewer but reflected in a shield -- a skillful artistic trick," he added.

"There is clear evidence of multiple ancient repairs in these damaged areas. The most recent restorations filled the gaps with mortar, while more ancient repairs used tesserae," Beckmann said.

According to Beckmann, the repairs tell a story. They indicate that the mosaic had been damaged by overuse, and often in exactly the same areas.

"Over time, even careful footsteps would have loosened the very small stone tesserae from their tenuous hold in the mortar of the mosaic's bedding. At least once, substantial repairs were attempted, but clearly by the first century A.D., these had been given up in favor of simple patching with plain mortar," Beckmann said.

The two upper patches of wear even allowed Beckmann to reconstruct a theoretical "tour" of the mosaic. Here is Beckmann's explanation:

Once the visitors had entered the room -- we might imagine a group of dinner-guests led by their host -- the tour would begin with Darius and his Persians.

The host would have stood above Darius' horses (1), explained why the great king was fleeing, and pointed out the artistic novelties in the lower portion of the mosaic.

The guests would have milled about at the foot of the mosaic, taking in the overall scene, and then briefly concentrated themselves around the figures of the two doomed Persians (a - b).


Then the host moved to the left and stationed himself in the area above the figure pair composed of Alexander and the unfortunate Persian he is spearing2). (

The guests marched right onto the mosaic and crowded around the image of the Macedonian king, standing right on top of his body (c ), being careful however not to step on his head or that of his horse.

The guests arranged themselves in a semicircle, so as to leave a line of sight open between them and their host, who was also able to see Alexander's head from his vantage point above.

Here the guests stayed the longest and here is where the ancient tour would end. 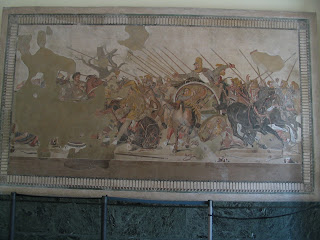 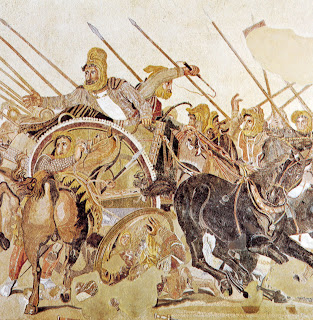 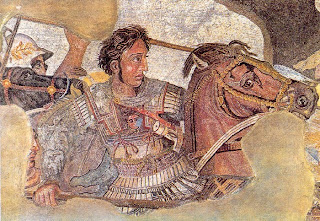 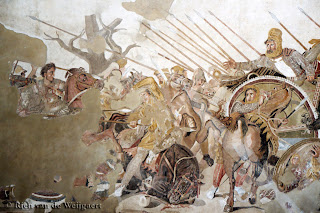