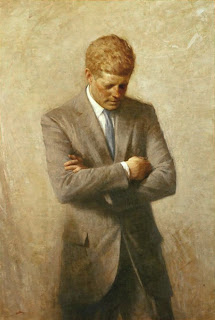 Aaron Shikler (born March 18, 1922) is an American artist noted for portraits of American statesmen and celebrities.

Shikler studied at the Tyler School of Art, Philadelphia, and at the Hans Hofmann School, New York and is represented in numerous public collections such as The Brooklyn Museum of Art, The Metropolitan Museum of Art, the Hirshhorn Museum and Sculpture Garden, the New Britain Museum of American Art, and the National Academy of Design.

1. Murder of John F. Kennedy Jr v Murder of Robert F. Kennedy and John F. Kennedy and End Times Reductionism
Nothing like the July 1999 CNN Board to illustrate this point.
Shortly after the "accident" was announced, CNN opened the message board "Kennedy Tragedy". (1)
Three hours later Matt Marriott posted "22 November 1963- 19 July 1999 - the circle is completed", which became visible in the first page of the board.
A milestone of end times reductionism about the satanic ritual murders part of the End of the USA puzzle. (2)

Three days later, 22 July 1999, after posting to the CNN board links to a page with the obvious keys (3) to a murder which was designed to be obvious, unlike the murder of Robert Kennedy in 1968 and John F Kennedy in 1963, Matt Marriott was banned from the CNN boards.
For the global illuminati media, after a moment of Truth shortly before and shortly after the begin of Armageddon, 22 July 1999 is the milestone for the end of placing pieces in the Illuminati End Times puzzle, till the end of Armageddon.

The last page of that board was designed to have as first lines the 26 July 1999 post of a CIA psy-op handle ("Joe Lewelling") "exposing"the fact that the Clintons attended the satanic ritual murder. The post was terminated in the illuminati joke format, with a reference to prosecutor Kenneth Starr, one of the key actors during the previously staged Clinton Impeachment.
26 July 1999, one week after the "plane crash" was announced, the last page of the board is another milestone of end times reductionism, with the Illuminati for the first time openly telling the sheep the essential "detail" of one of the satanic ritual murders part of the End of the USA puzzle. (4)

As now the Illuminati stage the "Obama's 100 Days: Behind-the-Scenes Photos" act, a set of 77 photos, which maximally reduced returns only one, the "Looking at History" photo, where "Obama stops to consider Aaron Shikler's famous portrait of John F. Kennedy" (5), the time came to reveal the FULL STORY of the assassination of John F. Kennedy Jr.

Notes
(1) CNN forums were the only global illuminati mass media where it was possible to post without previous censorship, although posts exposing core lies would be deleted later.
CNN boards, where End Times Prophet revealed the first pieces of the End Times puzzle, the "Clinton Impeachment", the ultimatum to Serbia in 1998 and the FULL STORY about who are the Illuminati, hours before the begin of the battle of Armageddon, March 24 1999.

(4) Joe Lewelling - 07/26/99, 10:56 am (#2881 of 2897)
Obviously the Clintons are behind this--John-John was about to endorse Guilliani for Senator and Hillary had to take him out./
Evidence?
1. The crash was near Martha's Vinyard--The Clintons vacation on Martha's Vinyard.
2. The wreckage washed up on Gayhead Beach. The Clintons have been big gay rights supporters.
3. The plane was a Piper. J F K Jr was killed to keep him from "piping up"!
Paranoid? I think not!
It is time that Starr looked into the whereabouts of Hillary Clinton, Harold Ikes (sp!) and Jim Carvile on that Friday afternoon.
page archived: http://web.archive.org/web/199911221...X?13@@.ee6e599

(5) Looking at History
On an early tour of the White House residence, Obama stops outside the State Dining Room to consider Aaron Shikler's famous portrait of John F. Kennedy.http://www.time.com/time/photogaller...874099,00.html 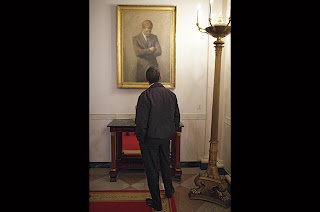 Looking at History
On an early tour of the White House residence, Obama stops outside the State Dining Room to consider Aaron Shikler's famous portrait of John F. Kennedy.