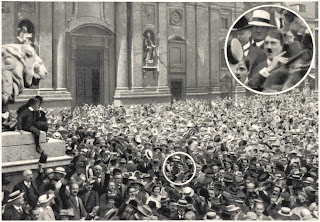 A famous image shows Adolf Hitler attending a rally in Munich, Germany, at the outset of World War I in 1914. Historian Gerd Krumeich told a German newspaper this week that he determined the image was almost certainly a fake.

BERLIN (Oct. 16) -- A new exhibit about Adolf Hitler and the Germans breaks taboos and treads new ground as it explores the relationship between the Fuehrer and his Volk.

The exhibit, which opened this week in Berlin to crowds of curious visitors, is packed with Nazi memorabilia, from swastika-bearing beer mugs to SS uniforms, in a bid to show how pervasive propaganda images of Hitler were throughout German society as the Nazis gained and then held power. By coincidence, it includes one famous image purportedly showing Hitler at at World War I rally that was revealed this week to have almost certainly been doctored.

Called "Hitler and the Germans: Nation and Crime," the exhibit at the German Historical Museum is careful not to open itself to charges that it is fueling a personality cult. It contains no memorabilia of Hitler himself, seeking only to show how his image was used in Nazi society.

"We don't want to focus on Hitler as a personality," Hans-Ulrich Thamer, curator of the exhibit, told reporters at a preview of the exhibit Wednesday. "We want to look at the rise of the regime, how it operated in power and how it fell, and the tremendous destructive potential that National Socialism unleashed."

The exhibit comes at a time when racism appears to be on the rise in Germany. A study published this week by the Friedrich Ebert Foundation, which is financed by the Social Democratic Party, showed that 35.6 percent of those polled believe Germany is being "overrun by foreigners." More than one in 10 Germans polled agreed with the statement that the country needed a "Fuehrer" to rule "with a strong hand," and about a third said foreigners should be sent home when jobs are scarce.

"In 2010, there has been a significant increase in anti-democratic and racist attitudes," the study's authors, Elmar Braehler and Oliver Decker, told reporters. "We are experiencing a dramatic turning point."

That poll comes on the heels of a heated debate over a book by Thilo Sarrazin, a former Social Democrat politician, that criticized German immigration policy and appeared to make racist comments about Muslims living in Germany. As a result of the row, Sarrazin was forced to resign from his post on the board of Germany's influential central bank, the Bundesbank.

Against that backdrop, Stephan Kramer, head of the Central Council of Jews in Germany, considers the Hitler exhibit important.

"I think this exhibit takes place at the right time because the various debates taking place right now, for example about the Sarrazin book, show how the lower middle class can be used and misled by pandering to their fears," Kramer said. "My only concern is that the wrong people will come and visit the exhibit."

The curators went to great lengths to deflect the seductive power of images of Hitler and other artifacts by placing them side by side with documentary presentations of Nazi atrocities and the path of destruction that Hitler wove through Europe. There are plenty of Nazi symbols in the exhibit -- swastikas, parade flags bearing the Nazi call to arms "Deutschland erwache!" (Germany awake!) and an extensive presentation of Nazi propaganda films.
Michael Sohn, AP
Various Nazi paraphernalia including cigars, a wallet and a quartet decorated with a swastika are shown at the exhibit "Hitler and the Germans: Nation and Crime" in Berlin on Wednesday.
Not all those images are what they seem to be.The exhibition contains one iconic photo of Hitler cheering amid a crowd at a Munich war rally at the outset of World War I, which the Nazis touted as evidence of the Fuehrer's patriotic common touch. This week historian Gerd Krumeich told Die Welt newspaper that he had determined that the picture, frequently reproduced during and since the Nazi era, was almost certainly a fake and that Hitler's image had been superimposed on the photo. Other similar plates in the studio of Munich photographer Heinrich Hoffmann looked very different, and the Hitleresque figure appears in no other images of the Aug. 2, 1914, rally.

The curators declined to exhibit objects they feared could draw neo-Nazis or sympathizers. While they exhibited a number of authentic Nazi uniforms, for example, they did not request a uniform held in Moscow that was actually worn by Hitler.

Simone Erpel, one of the curators of the exhibit, says it was important to treat these objects with a certain "critical distance," adding that this is the first museum exhibit to seriously explore why the Germans were so fascinated with Hitler.

Sponsored Links
"We are not making Hitler a hero," she said.

An absorbing subplot in the exhibit is how Germany has dealt with the Fuehrer in the postwar period. Demonstrating the continued fascination -- or morbid curiosity -- with Hitler, one corner of the exhibit displays a wall of photos of Hitler that have emblazoned the cover of Germany's leading weekly magazine, Der Spiegel. Since the 1990s, the curators said, Der Spiegel has put Hitler on the cover at least once a year.

In recent years, Germany has begun more openly debating the Fuehrer and the fascination he exerted over ordinary Germans. In the past Hitler was often presented as pure evil, beyond human. But the 2004 film "Downfall," a portrayal of the last days of the Third Reich, broke the final taboo and presented an image of Hitler as a deranged, feeble and ultimately broken man. It was "Downfall," more than any other recent event, that paved the way for the German Historical Museum to approach this sensitive subject.

The effort seems to have paid off in the minds of foreign tourists visiting Berlin.

"This is a brilliant exhibit of contrasts," said Jetin Habstaat, a tourist from Oslo, Norway. "One can see the propaganda but you can also see the opposition. It shows also the impact of the violence."
Found Here: http://www.aolnews.com/world/article/berlin-adolf-hitler-exhibit-breaks-taboos-and-reveals-a-hoax/19676166?icid=main|main|dl1|sec1_lnk2|178220