GEOLOGIC TIME SPIRAL - A Path to the Past 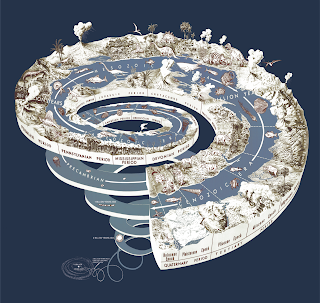 GEOLOGIC TIME SPIRAL (overleaf), showing the sequence, names, and ages of the geologic periods and epochs, and the evolution of plant and animal life on land and in the sea. The primitive animals that evolved in the sea during the vast Archean and Proterozoic Eons left few traces in the rocks because they had not developed hard parts, such as shells, but hard-shell or skeletal parts became abundant during and after the Cambrian Period. This drawing was made when the Geological Survey and most others used the term Precambrian to embrace what is now included in the Archean and Proterozoic Eons. The end of the Archean Eon and beginning of the Proterozoic Eon has been placed at about 2,500 million years ago. Also, because of more recent radiometric dating, the ages of the boundaries between some of the geologic periods and epochs have been changed slightly. Of most concern to this report, the boundary between the Pliocene and Pleistocene Epochs has been changed from 3 million to 2 million years. Drawn by John R. Stacy originally for inclusion in a report by Newman (1976). (click on image for an enlargement in a new window)

The Earth is very old—4.5 billion years or more according to scientific estimates. Most of the evidence for an ancient Earth is contained in the rocks that form the Earth's crust. The rock layers themselves—like pages in a long and complicated history—record the events of the past, and buried within them are the remains of life—the plants and animals that evolved from organic structures that existed 3 billion years ago.

Also contained in rocks once molten are radioactive elements whose isotopes provide Earth with an atomic clock. Within these rocks, "parent" isotopes decay at a predictable rate to form "daughter" isotopes. By determining the relative amounts of parent and daughter isotopes, the age of these rocks can be calculated. Thus, the scientific evidence from rock layers, from fossils, and from the ages of rocks as measured by atomic clocks attests to a very old Earth.