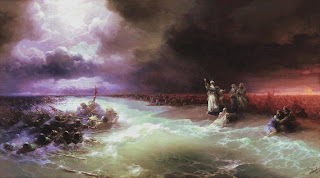 Ivan Konstantinovich Aivazovsky (Armenian: Հովհաննես Այվազովսկի – Hovhannes Aivasovsky, originally Aivazian, Russian: Иван Константинович Айвазовский) July 29, 1817 – May 5, 1900) was a Russian[1][2][3][4] painter of Armenian descent living and working in Crimea, most famous for his seascapes, which constitute more than half of his paintings.

Aivazovsky was born in the town of Feodosiya (Theodosia), Crimea (Russian Empire) (modern-day Ukraine) to a poor Armenian family. His parents' family name was Aivazian. Some of the artist's paintings bear a signature, in Armenian letters, "Hovhannes Aivazian" (Հովհաննես Այվազյան). His talent as an artist earned him sponsorship and entry to the Simferopol gymnasium №1 and later the St.Petersburg Academy of Arts, which he graduated with a gold medal. Earning awards for his early landscapes and seascapes, he went on to paint a series of portraits of Crimean coastal towns before travelling throughout Europe. In later life, his paintings of naval scenes earned him a long-standing commission from the Russian Navy stationed in the Black Sea.

In 1845, Aivazovsky went to Constantinople upon the invitation of Sultan Abdülmecid I, a city he was to travel to eight times between 1845–1890. During his long sojourn in Constantinople, Aivazovsky was commissioned for a number of paintings as a court painter by the Ottoman Sultans Abdülmecid, Abdulaziz and Abdulhamid, 30 of which are currently on display in the Ottoman Imperial Palace, the Dolmabahce Museum and many other museums in Turkey. His works are also found in dozens of museums throughout Russia and the former Soviet republics, including the Hermitage Museum in Saint Petersburg, and the Aivazovsky Art Gallery in Feodosiya, Ukraine. The office of Turkey's Foreign Minister, Abdullah Gül, has Aivasovsky's paintings on the wall.[5] 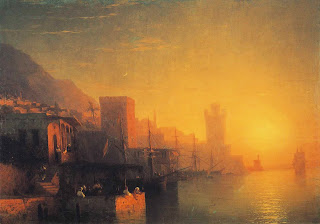 At 31, Aivazovsky married Julia Graves, an English governess in St. Petersburg. They had four daughters. The marriage was dissolved, and at the age of 65, Aivazovsky, married Anna Boornazian, a young Armenian widow from Theodosia.

Aivazovsky was deeply affected by the Hamidian massacres of Armenians in Asia Minor in 1895, painting a number of works on the subject such as "The Expulsion of the Turkish Ship," and "The Armenian Massacres at Trevizond." and renouncing a medal which had been awarded to him in Constantinople.[6] He spent his last years in Feodosia where he supplied the town with water from his own estate, opened an art school, began the first archaeological excavations in the region and built a historical museum. Due to his efforts a commercial port was established at Feodosiya and linked to the railway network.[7]. Aivasovsky died in Feodosiya in 1900.

Aivazovsky is best known for his seascapes and coastal scenes. His technique and imagination in depicting the shimmering play of light on the waves and seafoam is especially admired, and gives his seascapes a romantic yet realistic quality that echoes the work of English watercolorist J. M. W. Turner and Russian painter Sylvester Shchedrin. Especially effective is his ability to depict diffuse sunlight and moonlight, sometimes coming from behind clouds, sometimes coming through a fog, with almost transparent layers of paint. A series of paintings of naval battles painted in the 1840s brought his dramatic skills to the fore, with the flames of burning ships reflected in water and clouds. He also painted landscapes, including scenes of peasant life in Ukraine and city life in Constantinople. Some critics have called his paintings from Constantinople Orientalist[8], and others feel the hundreds of seascapes can be repetitive and melodramatic. 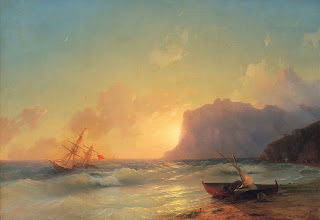 Aivazovsky became the most prolific Armenian painter of his time. He left over 6,000 works at his death in 1900. The funds earned during his successful career as an artist enabled him to open an art school and gallery in his hometown of Feodosiya.

As of 2006[update], Aivazovsky's works have been auctioned for as much as $3,200,000, and his international reputation continues to grow.[9] On June 14, 2007 his painting "American Shipping off the Rock of Gibraltar" sold for 2,710,000 pounds, "the highest price paid at auction for Aivazovsky".[10] He is also said to be the most forged of all Armenian painters.

Biography: Hovhannes (Ivan) Aivazovsky is the most interesting phenomenon of 19th century art. He gained international fame at the age of 25, was elected a member to five European Academies and was awarded the medal of the French Legion of Honor. Delacroix referred to him in reverence and Turner called him a genius.

Aivazovsky's name is intricately bound with the sea. "Perhaps no one in Europe has painted the extraordinary beauty of the sea with so much feeling and expressiveness as Aivazovsky has", writes V. Adasov.

In his best seascapes (and in a legacy of about 6000, there are some works which condescend to his artistic ability and others which merit singular artistic attention) he has revealed his inner self through the spirit of the times, his ideals of humanism, and the love of freedom. The Artist lived by those ideals; the love that he had towards the oppressed, the help he offered and the work that he did for the public good make him an exceptional individual and a true son of his times.

Aivazovsky was born to an Armenian family in the city of Theodosia in the Crimea {The Artist's ancestors were called Aivazian. His father called himself Haivazosky. The Artist and his brother decided to call themselves Aivazian or Aivazovsky. Some of the Artist's work bears the signature Hovhannes Aivazian, in Armenian}. At the age of twenty he graduates from the Art Academy of St. Petersburg with a gold medal. He goes to Italy to continue his studies and returns as an internationally acclaimed seascape painter. Neither financial security nor life in Palace interests him. He returns to his native land, builds a workplace/home on the seashore and, until the last days of his life, dedicates himself to the work that he loves. He participates in exhibitions all over the world. He gets recognition and glory as a representative of Russian art greatly helps in familiarizing it.

In Aivazovsky's creative work one finds such aspects of Armenian culture and national temperament that it becomes impossible to separate his art from his native people. It is this characteristic that gives Aivazovsky's creativity its unique quality. 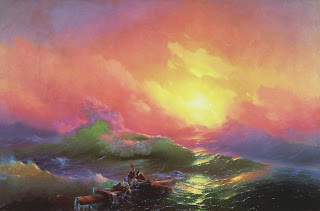 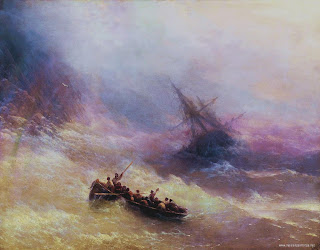 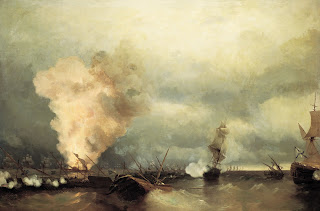 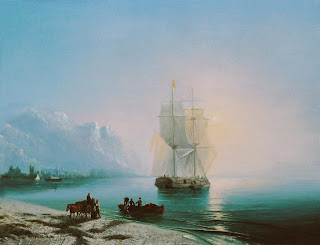 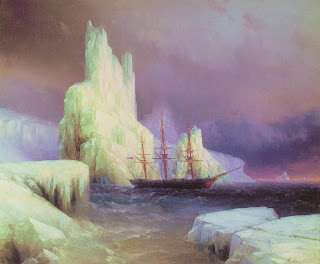 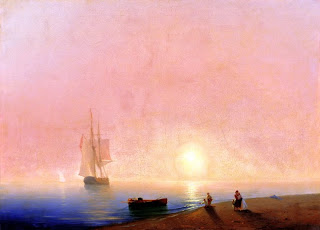