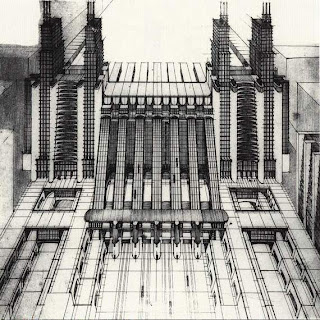 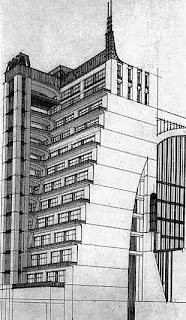 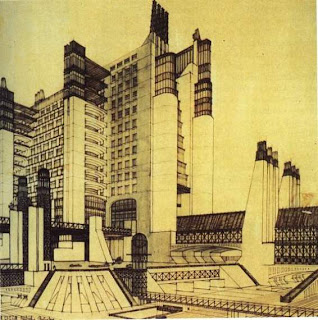 He was born in Como, Lombardy. A builder by training, he opened a design office in Milan in 1912 and became involved with the Futurist1914, influenced by industrial cities of the United States and the Viennese architects Otto Wagner and Adolf Loos, he began a series of design drawings for a futurist Città Nuova ("New City") that was conceived as symbolic of a new age. movement. Between 1912 and

Many of these drawings were displayed at the first and only exhibition of the Nuove Tendenze group (of which he was a member) exhibition in May/June 1914 at the "Famiglia Artistica" gallery. Today, some of these drawings are on permanent display at Como's art gallery (Pinacoteca). (They used to be in the Villa Olmo)

The manifesto Futurist Architecture was published in August 1914, supposedly by Sant'Elia, though this is subject to debate. In it the author stated that "the decorative value of Futurist architecture depends solely on the use and original arrangement of raw or bare or violently colored materials"[citation needed]. As described in this manifesto, his designs featured bold groupings and large-scale disposition of planes and masses creating a heroic industrial expressionism. His vision was for a highly industrialised and mechanized city of the future, which he saw not as a mass of individual buildings but a vast, multi-level, interconnected and integrated urban conurbation designed around the "life" of the city. His extremely influential designs featured vast monolithic skyscraper buildings with terraces, bridges and aerial walkways that embodied the sheer excitement of modern architecture and technology.

A socialist as well as an irredentist, Sant'Elia joined the Italian army as Italy entered World War I in 1915. He was killed during the Battles of the Isonzo, near Monfalcone. Most of his designs were never built, but his futurist vision has influenced many architects, artists and designers.