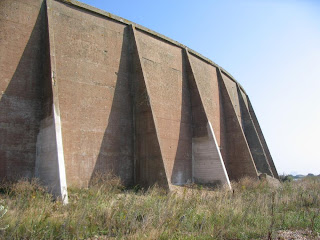 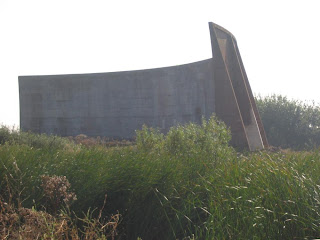 By the mid-1930s, a vast and varied network of listening devices had been envisaged, enclosing the Thames Estuary and the south-east coast in what Paul Virilio (writing of the German defenses which would later loom along the other side of the English Channel) has called “a carpet of trajectories.” The remnants of this doomed project, the architectural remains of a technology gradually overcome in the late 1930s by experiments with radar and a generalized eruption of the acoustic realm, are still to be seen at certain points along the coast. These long-decaying but still startlingly sculptural structures are monuments to both past and future, their eerie archaeology also a reminder of the whole panoply of technologies of the immaterial that have proliferated in the military sphere, the space of war now dominated by the grotesque intersection of implacable abstraction and fragile flesh.... (more)

Spectacular remnants of a dead-end technology, the three "listening ears" at Denge near Dungeness in Kent are the best known of the various acoustic mirrors built along Britain's coast. A forerunner of radar, the sound mirrors were intended to provide early warning of enemy aeroplanes (or airships) approaching Britain.

The mirrors did work, but the development of faster aircraft made them less useful, as an incoming aircraft would be within sight by the time it had been located. Increasing ambient noise made the mirrors harder to use successfully, and then radar rendered acoustic detection redundant.

There are three different designs of sound mirror at Dungeness;
from the left are the 200', 30' and 20' mirrors. 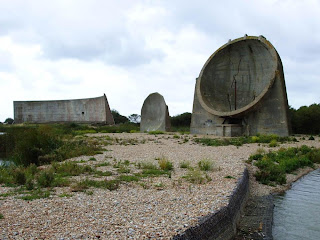 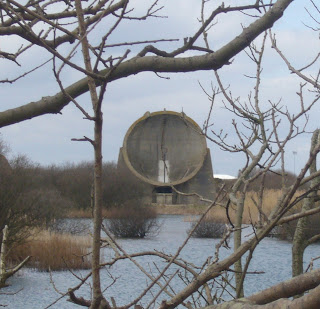