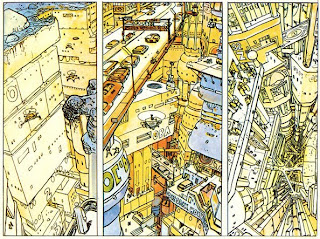 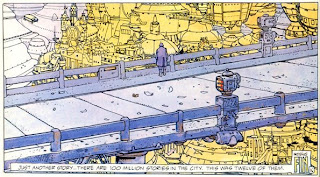 Jean Giraud lives one of the most interesting double lives in comics history. Under his own name, he is the artist of the legendary 'Blueberry' western series, and under the pseudonym of Moebius, he is one of the most innovative artists of the 20th century. After having followed several art studies since a very young age, like at the School of Applied Arts in Paris, Giraud drew his first comics and illustrations for Far-West ('Frank et Jérémie'), Sitting-Bull, Fripounet et Marisette, Âmes Vaillantes and Coeurs Vaillants in the mid-1950s. He served his military service in Algeria, where he collaborated on the army magazine '5/5 Forces Françaises'. Back in civil life, he learned the finer points of the comics profession from Jijé, whom he assisted on the episode 'La route de Coronado' of the western series 'Jerry Spring' in Spirou. He additionally worked with Jean-Claude Mézières on the collection 'L'Histoire des Civilisations' of Hachette in 1961-62.

Found Here: http://lambiek.net/artists/g/giraud.htm
Posted by Tim Razo at 1:42 AM