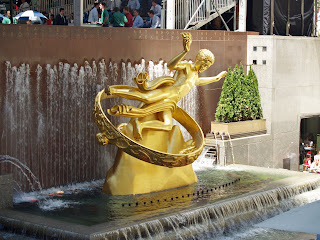 Paul Manship's highly recognizable bronze gildedPrometheus recumbent, bringing fire to mankind, features prominently in the sunken plaza at the front of 30 Rockefeller Plaza. The model for Prometheus was Leonardo (Leon) Nole, and the inscription from Aeschylus, on the granite wall behind, reads: "Prometheus, teacher in every art, brought the fire that hath proved to mortals a means to mighty ends." Although some sources cite it as the fourth-most familiar statue in the United States, behind the Lincoln Memorial, Mount Rushmore and the Statue of Liberty, Manship was not particularly fond or proud of it.

statue of the Greek legend of the Titan

[edit] Prometheus in other arts

Prometheus' torment by the eagle and his rescue by Heracles were popular subjects in vase paintings of the 6th-4th c. BC. He also sometimes appears in depictions of Athena's birth from Zeus' forehead.

There was a relief sculpture of Prometheus with Pandora on the base of Athena's cult statue in the Athenian Parthenon of the 5th century BC.

Pausanias also wrote that the Greek cities of Argos and Opous both claimed to be Prometheus' final resting place, each erecting a tomb in his honor.

Finally, Pausanias attested that in the Greek city of Panopeus there was a cult statue claimed by some to depict Prometheus, for having created the human race there.[13]

The mythological story that Prometheus was chained to a rock in the Caucasus mountain and his liver was eaten every day by an eagle only to "regenerate" in the night has been used by scientists studying liver regeneration as an indication that ancient Greeks knew that liver can regenerate if surgically removed or injured[20]. Because of the association of Prometheus with liver regeneration, his name has also been associated with biomedical companies involved in regenerative medicine.[21]

Sculpture of Prometheus in front of the GE Building at the Rockefeller Center (New York City, New York, United States).