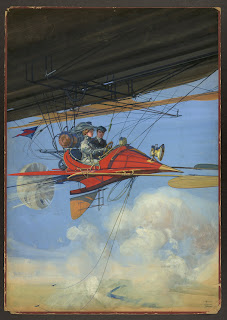 Harry Grant Dart was an American illustrator and comics artist active in the late 1800’s and early 1900s.

He worked for the Boston Herald and then the New York World, where he eventually held the position of Art Editor. He was one of the newspaper sketch artists who sketched important events for newspapers prior to the use of photographs (see my post on The Illustrators of La Domenica del Corriere). He also maintained an outside career as a magazine illustrator, working for titles like Life and Judge.

As a cartoonist Dart created a comic strip called The Explorigator, about a an airship staffed by a crew of adventurous kids. Meant to be a competitor for Winsor McCay’s spectacular strip Little Nemo in Slumberland, The Explorigator only ran for 14 weeks in 1908.

There aren’t a lot of resources on Dart that I could find, but there is a treasure of an archive of The Explorigator on the Barnicle Press site; sadly, not in color, but still a stunning example of this detailed, beautifully drawn and wildly imaginative strip.

The strip featured Dart’s penchant for drawing fantastic Victorian era aircraft, which also showed up in his other illustrations, like the image above (large version here on Flickr), done for a magazine called The All-Story.

I love the fact that he’s given us a liberated, fashionably attired Victorian era woman pilot, years before women could vote. 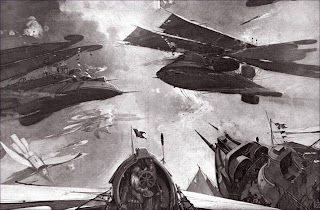 Harry Grant Dart (1869 – 1938) was an American cartoonist and illustrator known for his futuristic and often aviation-oriented cartoons and comic strips.

His first jobs were brochures for the National Crayon Company and illustrations for the Boston Herald. His career took off when the New York World arranged to send him to Cuba. He became a sketch artist for important events, his sketches being published in the newspaper in the days before photographs were used. He rose to become the art editor for The World. It was at this time that he started perhaps his most famous comic strip, The Explorigator.[1]

Intended as a rival for Winsor McCay's Little Nemo, The Explorigator concerned the flight of the eponymous airship, headed by a crew of children ages 9–10: Admiral Fudge (who, interestingly, wore a swastika on his hat), Detective Rubbersole, Maurice Mizzentop, Nicholas Nohooks, Grenadier Shift, Teddy Typewriter, and Ah Fergetit.[2] The strip only ran for 14 weeks in 1908, yet its detailed drawings of airships and various other aircraft would later find some fame in the steampunk movement.[3]

Dart went on to become a very prolific cartoonist, continuing with Boys Will Be Boys in 1909 and Life and Judge in the 1920s. Although he is one of the more obscure cartoonists of his era, a few of his works survive in the Library of Congress.[4] 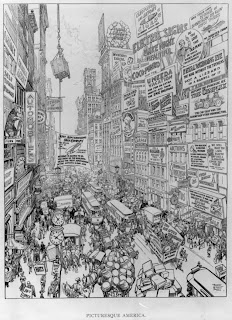