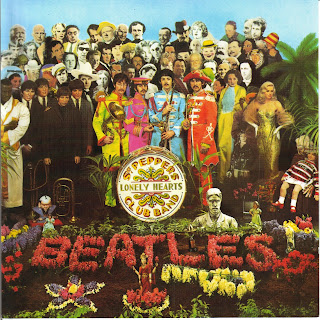 This album cover was created by Jann HaworthPeter Blake. They won the Grammy Award for Best Album Cover, Graphic Arts in 1968 for their work on this cover. and

IT is one of the most famous and influential albums ever recorded, and its cover has become part of pop music history.

And almost as iconic as the anthems within was its eye-catching pop art cover featuring the Fab Four alongside a collage of life-sized cardboard models including famous writers, musicians, film stars and Indian gurus.

Who's who ... see which icons of yesterday have been replaced with today's icons

18. Police founder Robert Peel replaced by Sting, the founder of The Police.

19. Drug-dabbling writer Aldous Huxley replaced by off-his-head writer Will Self.

29. One half of comedy double act Stan Laurel replaced by Dec’s other half Ant McPartlin.

67. Legionnaire from the Order of the Buffalo replaced by anonymous British soldier in Iraq.

72. Statue from home of John Lennon replaced by statue of Bobby Moore. 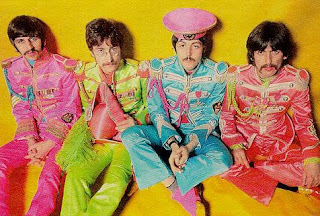 The Grammy Award-winning album packaging was art-directed by Robert Fraser, designed by Peter Blake and his wife Jann Haworth, and photographed by Michael Cooper. It featured a colourful collage of life-sized cardboard models of famous people on the front of the album cover and lyrics printed on the back cover, the first time this had been done on a British pop LP.[16]day-glo colours. The suits were designed by Manuel Cuevas.[17] Among the insignia on their uniforms are: The Beatles themselves, in the guise of the Sgt. Pepper band, were dressed in custom-made military-style outfits made of satin dyed in

Art director Robert Fraser was a prominent London art dealer who ran his own gallery and sponsored exhibitions at the Indica Gallery, through which he had become a close friend of McCartney, and it was at his strong urging that the group abandoned their original cover design, a psychedelic painting by The Fool. The Fool's design for the inner sleeve was, however, used for the first few pressings.

Fraser was one of the leading champions of modern art in Britain in the 1960s and after. He argued strongly that the Fool artwork was not well-executed and that the design would soon be dated. He convinced McCartney to abandon it, and offered to art-direct the cover; it was Fraser's suggestion to use an established fine artist and he introduced the band to a client, noted British "pop" artist Peter Blake, who, in collaboration with his wife, created the famous cover collage, known as "People We Like".

According to Blake, the original concept was to create a scene that showed the Sgt. Pepper band performing in a park; this gradually evolved into its final form, which shows the Beatles, as the Sgt. Pepper band, surrounded by a large group of their heroes, rendered as lifesized cut-out figures. Also included were wax-work figures of the Beatles as they appeared in the early '60s, borrowed from Madame Tussauds.

In keeping with the park concept, the foreground of the scene is a floral display incorporating the word "Beatles" spelt out in flowers. Also present are several affectations from the Beatles' homes including small statues belonging to Lennon and Harrison, a small portable TV set and a trophy. A young delivery boy who provided the flowers for the photo session was allowed to contribute a guitar made of yellow hyacinths. Although it has long been rumoured that some of the plants in the arrangement were cannabis plants, this is untrue.

At the edge of the scene is a Shirley Temple doll wearing a sweater in homage to the Rolling Stones (who would return the tribute by having the Beatles hidden in the cover of their own Their Satanic Majesties Request LP later that year).

A photo also exists of a rejected cardboard printout with a cloth draped over its head; its identity is unknown. Even now, co-creator Jann Haworth regrets that so few women were included.[18]List of images on the cover of Sgt. Pepper's Lonely Hearts Club Band. The entire list of people on the cover can be found at

The collage created legal worries for EMI's legal department, which had to contact the people who were still living to obtain their permission. Mae West initially refused — famously asking "What would I be doing in a lonely hearts club?" — but she relented after the Beatles sent her a personal letter. Actor Leo Gorcey requested payment for inclusion on the cover, so his image was removed. An image of Mohandas Gandhi was also removed at the request of EMI (it was airbrushed out), who had a branch in India and were fearful that it might cause offence there. Lennon had asked to include images of Jesus Christ and Adolf Hitler, though neither was included through fear of causing offence. Nonetheless a cutout was made of Hitler and can be clearly seen leaning against the wall in pictures of the photographic session. Most of the suggestions for names to be included came from McCartney, Lennon and Harrison, with additional suggestions from Blake and Fraser (Starr demurred and let the others choose). Beatles manager Brian Epstein had serious misgivings, stemming from the scandalous US Butcher Cover controversy the previous year, going so far as to give a note reading "Brown paper bags for Sgt. Pepper" to Nat Weiss as his last wish.

The collage was assembled by Blake and his wife during the last two weeks of March 1967 at the London studio of photographer Michael Cooper, who took the cover shots on 30 March 1967 in a three-hour evening session. The package was a "gatefold" album cover, that is, the album could be opened like a book to reveal a large picture of the Fab Four in costume against a yellow background. The reason for the gate fold was that the Beatles originally planned to fill two LPs for the release. The designs had already been approved and sent to be printed when they realised they would only have enough material for one LP.

Originally, the group had wanted the album to include a package with badges, pencils and other small Sgt. Pepper goodies but this proved far too costly to realise. Instead, the album came with a page of cardboard cut-outs carrying the description:

The special inner sleeve, included in the early pressings of the LP, featured a psychedelic pattern designed by The Fool. 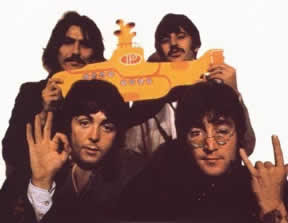 In the song "Sgt. Pepper's Lonely Hearts Club Band," Paul sings that it was "20 years ago today…" and to those convinced of a Satanic Beatles conspiracy of course Paul here is referring to the death, 20 years prior, of Satan's earthly fall guy Aleister Crowley, to whom the Fab Four dedicated that groundbreaking LP. From there, one can easily connect the dots, and 20 or 30 entirely rhetorical and totally tenuous connections later, we find that the Beatles were part of a Hollywood-area Satanic coven established by Crowley, and frequented by other devil-worshippers including the Rolling Stones and Led Zeppelin.