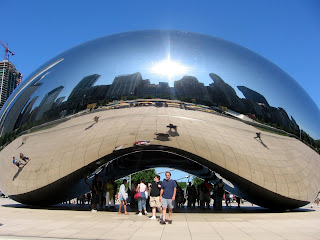 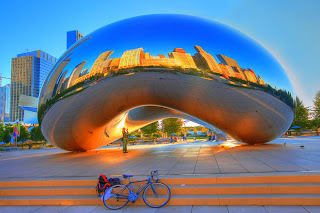 Chicago’s Millenium Park features two incredible pieces of public art that are worth seeing in person - Cloud Gate and The Crown Fountain. (www.millenniumpark.org/artandarchitecture/).
Photos by Carly Haffner and text by Don Porcella

Anish Kapoor’s Cloud Gate in Chicago’s Millenium Park. The 110-ton elliptical sculpture is forged of a seamless series of highly polished stainless steel plates and was installed in July 2004.

Looking up through the middle of Cloud Gate. A visual Vortex is created where the viewer seems farther away than possible. The small group of people in the center circle is the reflection of the viewer and the people around the viewer, looking up.

A fun house mirror effect is created under and around the whole sculpture. Viewer’s delight in seeing themselves reflected and distorted.

Because of it’s highly polished and reflective surface, the viewer becomes the art. Cloud Gate’s adornment is the surrounding environment. Whatever surrounds Cloud Gate defines the sculpture at that moment. In that way it is emblematic of its environment and at the same time ever changing.

Cloud Gate is a public sculpture by British artist Anish Kapoor. It is the centerpiece of the AT&T Plaza in Millennium Park within the Loop community area of Chicago, Illinois, and is located on top of Park Grill and adjacent to the Chase Promenade. The sculpture was constructed between 2004 and 2006 and was temporarily unveiled in the summer of 2004. Nicknamed "The Bean" because of its legume-like shape, its exterior consists of 168 highly polished stainless steel plates. It is 33 feet by 66 feet by 42 feet (10 m × 20 m × 13 m), and weighs 110 short tons (99.8 t; 98.2 long tons). The sculpture and the plaza are sometimes referred to jointly as "Cloud Gate on the AT&T Plaza" or "Cloud Gate on AT&T Plaza".

Cloud Gate has become a very popular sculpture that is known worldwide. Inspired by liquid mercury, the sculpture's exterior reflects and transforms the city's skyline. Visitors are able to walk around and under Cloud Gate's arch, which is 12 feet (3.7 m) high. On the underside of the sculpture is the omphalos, a concave chamber that warps and multiplies reflections. The sculpture builds upon many of Kapoor's artistic themes, although many tourists simply view the sculpture and its unique reflective properties as a photo-taking opportunity.

The sculpture was the result of a design competition. After being chosen, numerous technological concerns regarding the design's construction and assembly arose, in addition to concerns regarding the sculpture's upkeep and maintenance. Various experts were consulted, some of whom believed the design could not be implemented. Eventually, a feasible method was found, but the sculpture fell behind schedule. It was unveiled in an incomplete form during the Millennium Park grand opening celebration before being concealed for completion. 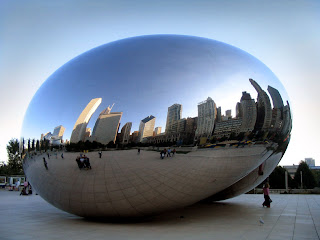 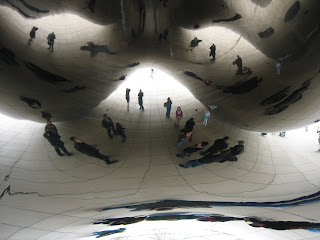 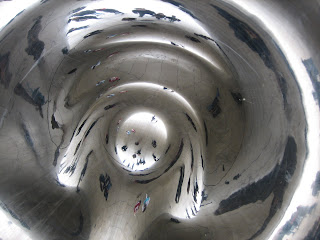