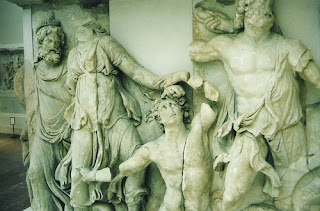 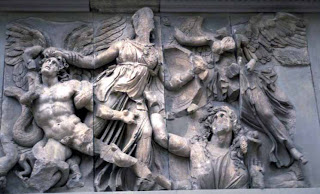 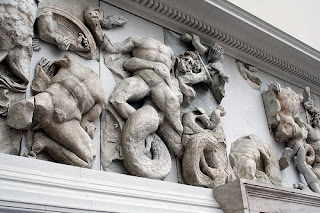 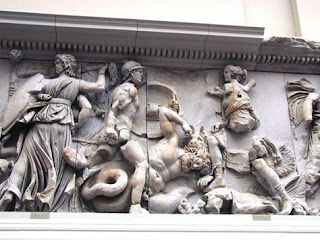 It has long been assumed that the magnificently-scaled and opulently decorated open-air altar— for it is not a temple—[2] was dedicated to Zeus.[3] The altar appears to be mentioned in the Book of Revelation, Revelation 2:12-13: "In Pergamos where Satan's Throne is".[4]. The only lengthy reference to it in Antiquity is in the Liber Memorialis of Ampelius (8.14), where it is described as "a large marble altar, forty feet high with a great many sculptures, among which a Battle of the Giants."

"Political considerations at Pergamon made it necessary to glorify the civic and religious center of the small city-state", Herbert Hoffmann observed in 1952. "The high podium served to impress the exalted position of the altar, situated as it was on a high elevation, upon foreign visitors as they approached along the plain to partake in the biennial festival of Athena Nikephoros".

Some fragments from the frieze (the back view of a Giant, probably from Worksop Manor, and a dead giant, found at Fawley Court have been identified), perhaps collected by William Petty, were part of Thomas Howard, Earl of Arundel's collection of Antiquities at Arundel House, Strand, London, but rejected, as too weathered, for inclusion in the gift to the Ashmolean Museum.[5] However, the main excavation was carried out in two campaigns, in 1879 and 1904, and shipped out of the Ottoman Empire by the German archaeological team lead by Carl Humann; it was reconstructed in the Pergamon Museum in Berlin, built in part to receive it, from 1910, where it can be seen alongside other monumental structures such as the Market Gate of Miletus and the Ishtar Gate from Babylon.

The Altar has a 113 metre (371 feet) long sculptural frieze depicting the gigantomachy, or struggle of the gods and the giants. "the frieze is composed of a sequence of isolated, tightly-knit and self-contained groups and figures" each unit assigned to one workshop. Many inscriptions on the lower moulded margin identify the sculptor responsible and his city.[6] 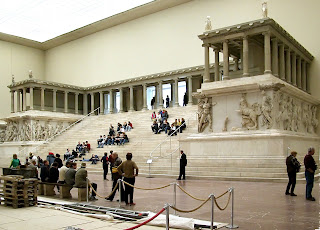 I am interested in working together. Take a look at what I have done and I'll do the same
Ming green marble Mosaic