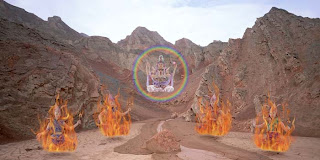 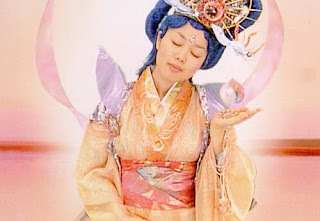 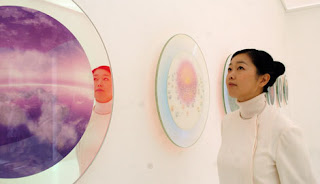 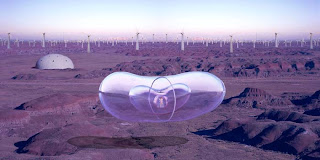 Tea with Mariko
by Kay Itoi

It was an impressive little piece of performance art. Mariko Mori, arguably the most visible Japanese artist in the West today, entered the all-white, glass and plastic tea room she had specially designed for the posh apartment that serves as her Tokyo studio. Dressed in a white, simple two-piece cotton dress and socks, Mori bowed to her guest (me), seated us both on the tatami mats and slowly proceeded to perform a tea ceremony.

Since I ignored my mother's order to learn the Way of Tea as a young girl, I could not tell whether her movement was exactly in sync with the traditional cha no yu -- although some of the utensils, like a glass chawan, or tea bowl, and a lime-green plastic chashaku, or tea scoop, looked rather unorthodox.

I was there because the Museum of Contemporary Art, Tokyo, had just announced plans to present Mori's first solo museum show in Japan, to be held early next year. So I finished drinking bitter tea in three gulps (as instructed) and took my pen in hand.

Mori, who was born in 1967 and has worked in New York City for 10 years, turned her smiling face to me. To me the tea room felt uncomfortably small, though obviously the artist was at home. Relaxed and in control, she spoke slowly, taking her time considering each question and answering in a low voice.

"Mariko Mori Pure Land" will be on display at Museum of Contemporary Art, Tokyo, Jan. 19-Mar. 24, 2002. It will be curated and organized by the Tokyo museum and the Milan-based Fondazione Prada.
KAY ITOI is a critic and reporter based in Japan.

Mariko Mori (森万里子, Mori Mariko, b. 1967 in Tokyo, Japan) is a Japanese video and photographic artist. While studying at Bunka Fashion College, she worked as a fashion model in the late 1980s. This strongly influenced her early works, such as Play with Me, in which she takes control of her role in the image, becoming an exotic, alien creature in everyday scenes. In 1989, she moved to London to study at the Chelsea College of Art and Design.