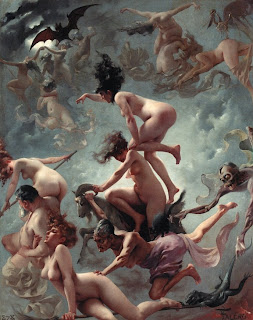 A suitably sorcerous bacchanal for Walpurgis Night by the Spanish painter. There’s more of his voluptuous erotica at ArtMagick and The Atheneum.

Falero was born in Granada, Spain and studied in Paris, working as a portraitist. He settled in London in the 1880s, dying there in 1896 at the age of 45. Falero specialised in the female nude in a mythological or fantasy setting.

Typical titles include 'Muse of the Night', 'The Minstral's Dance', 'Iris' and 'The Zodiac'.