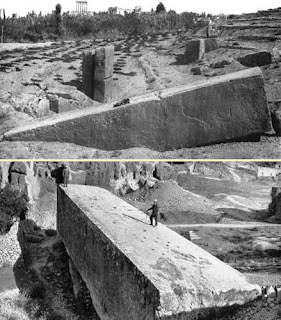 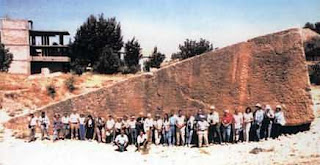 The Baalbek trilithon is a set of three massive stone blocks which are part of the foundation of the Temple of Jupiter Baal ("Heliopolitan Zeus") in Baalbek. They are so large that people cannot imagine how they were cut and transported to the site. As impressive as these three stone blocks are, though, there is a fourth block still in the quarry which is three feet longer than the blocks in the trilithon and which is estimated to weigh 1,200 tons. Locals have named it Hajar el Gouble (Stone of the South) and Hajar el Hibla (Stone of the Pregnant Woman), with the latter apparently being the most popular.

In the two photos above you can see just how large it is - if you look closely, each image has one or two people on the stone to provide reference. The stone is at an angle because it was never cut away. Although we can see that it was cut to be made part of the Baalbek site, it remains attached at its base to the underlying bedrock, not unlike a plant which still has roots in the earth. No one knows how such a massive stone block was cut so precisely or how it was supposed to be moved.

As with the trilithon, it's common to find people claiming that since we don't currently know how the ancient engineers accomplished this or how they planned on moving this massive block to the temple site, that therefore they must have employed mystical, supernatural, or even extraterrestrial means. This is just nonsense, however.Presumably the engineers had a plan, otherwise they would have cut a smaller block, and an inability to answer the questions right now simply means that there are things we don't know.

Baalbeck is a city in eastern Lebanon famous chiefly for its magnificent, excellently preserved Roman temple ruins. It was a flourishing Phoenician town when
the Greeks occupied it in 331 B.C. They renamed it "Heliopolis" (City of the Sun) .
It became a Roman colony under the Emperor Augustus in 16 B.C..On its acropolis, over the course of the next three centuries, the Romans constructed a monumental ensemble of three temples, three coutyards, and an enclosing wall built of some of the most gigantic stones ever crafted by man. Some tourists believe that the construction can only be attributed to extra-terrestial artwork .

At the southern entrance of Baalbeck is a quarry where the stones used in the temples were cut. A huge block, considered the largest hewn stone in the world, still sits where it was cut almost 2,000 years ago. Called the "Stone of the Pregnant Woman", it is 21.5m x 4.8m x 4.2meters in size and weighs an estimated 1,000 tons.